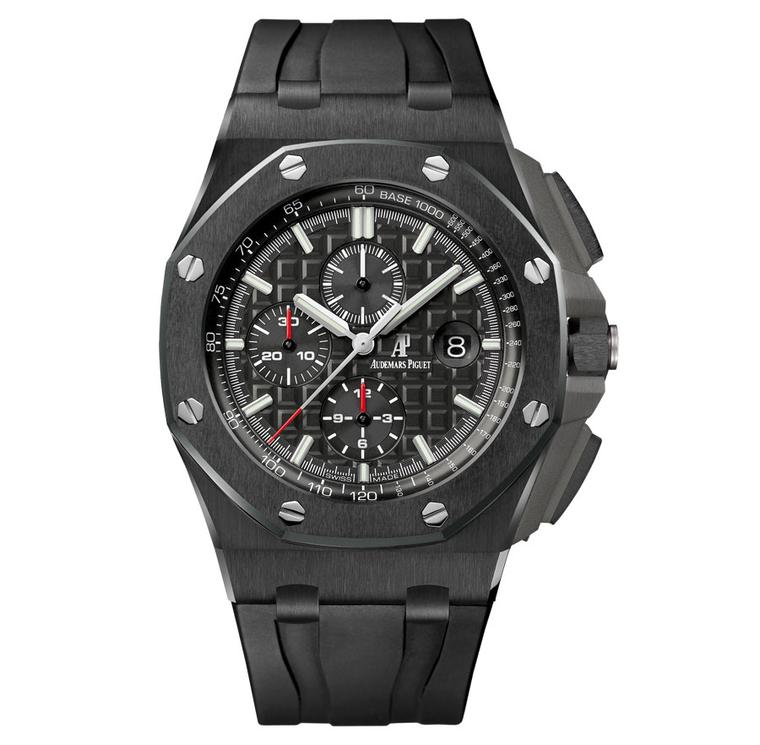 Audemars Piguet’s Royal Oak collection is one of the most recognisable in the world. Its bold octagonal face has as many incarnations as it does admirers, and at this year’s SIHH show it added some new faces to its line up that show a real sense of innovation from one of the world’s leading watch brands.

Launched in 1993, the larger, sportier Royal Oak Offshore celebrates its 20th anniversary this year, and to mark the occasion, Audemars Piguet has launched the Royal Oak Offshore Grande Complication – a stunning timepiece that combines three “classic” complications: a split-seconds chronograph, a minute repeater and a perpetual calendar. Audemars Piguet has been making high complications since 1882, but this is the first time the Royal Oak Offshore has been graced with a Grande Complication. The movement – created and assembled entirely by hand in the house’s ateliers – is the Calibre 2885, which has an impressive 648 parts, visible through the face and also via the sapphire glass caseback window. A traditional movement in a bold, confident body, this highly limited timepiece is available in either pink gold or titanium, with only three pieces being made in each finish.

Several other Royal Oak Offshore models also made their debut at the SIHH 2013: the Chronograph and the Diver. The Chronograph 44mm is a first for this particular collection, the only Offshore to feature an all-ceramic case and bezel in a brushed-satin finish. Pairing a ceramic build with the Royal Oak Offshore gives it a powerful – and highly durable – aesthetic. Ceramic is far tougher than steel, and it would take the hardness of a diamond to sully its surface. The Diver 42mm is also fitted with a black ceramic case and bezel, plus easy-grip crowns for sub-aquatic use. To improve underwater readability, a luminescent orange hand has been fitted over its black dial, which bears the traditional ‘Méga Tapisserie’ pattern. This matches the zone between 12 and 3 o’clock on the rotating inner bezel ring.

Turning our attention away from the Royal Oak Offshores, the Tradition Tourbillon Minute Repeater also deserves a special mention. Designed for that most discerning of Audemars Piguet admirers, it is inspired by a 1920s cushion-shaped pocket-watch in the brand’s private museum. As minute repeaters go, its has the extra advantage on its rivals – quite literally. The harmonious balance of light and hard materials contained within the 47mm titanium case gives the ultimate acoustic performance. This hand-wound minute repeater watch, with tourbillon, chronograph and small seconds at 6 o’clock, will be produced in two 10-piece limited editions, one in pink and white gold, the other in titanium and white gold.