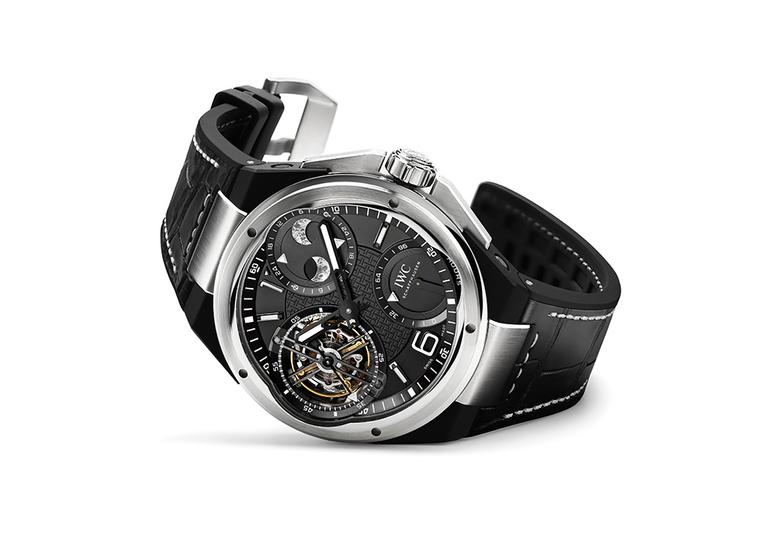 It is, when it comes to IWC, always a matter of keeping it in the family. Last year was all about the Pilot’s Watches family and ‘Top Gun’; the year before that it was Portofino and Peter Lindbergh’s impossibly sexy black and white photos of Elle McPherson. This year, centre stage is given over to that most utilitarian of watch families, the tough-nut Ingenieur.
But before we come to that, a quick history lesson. We have to go back to 1955 to find the first IWC Ingenieur – it was round and had an anti-magnetic soft-iron inner cage that protected its movement from the troublesome effects of the magnetic fields found in domestic appliances and the shiny, new factories of the day.
Then, in 1976, the late, great Gérald Genta got hold of the design, giving it angular shoulders and a round bezel with five bore holes. The Ingenieur SL, as it was called, became the design archetype for the line and has influenced it ever since.
No prizes, then, for spotting the Genta touch in this year’s haul, so instead take note of the breadth of models available. Formerly little more than a handful of chronographs, the latest brood of Ingenieurs now includes a constant-force tourbillon (think: very accurate), a double-chronograph (think: split-seconds timing) and a perpetual calendar with digital read-outs for the day and date (think: no date adjustment required, not even in a leap year).
On top of that, it comes in an array of case materials that will stretch most people’s understanding of the periodic table. Carbon, ceramic, titanium, stainless steel and titanium aluminide are all in the mix, the latter a thwack-proof compound borrowed from Formula 1 via IWC’s new engineering partnership with the Mercedes PETRONAS AMG F1 team.
Despite being impressed by all that clever techy stuff, my favourite of the new batch is also the simplest – the all-steel 40mm Automatic. I feel a bit guilty saying that as it doesn’t feature one of IWC’s brilliantly engineered in-house movements, but it is without question one of the most wearable watches to come out of SIHH this year. Fact.