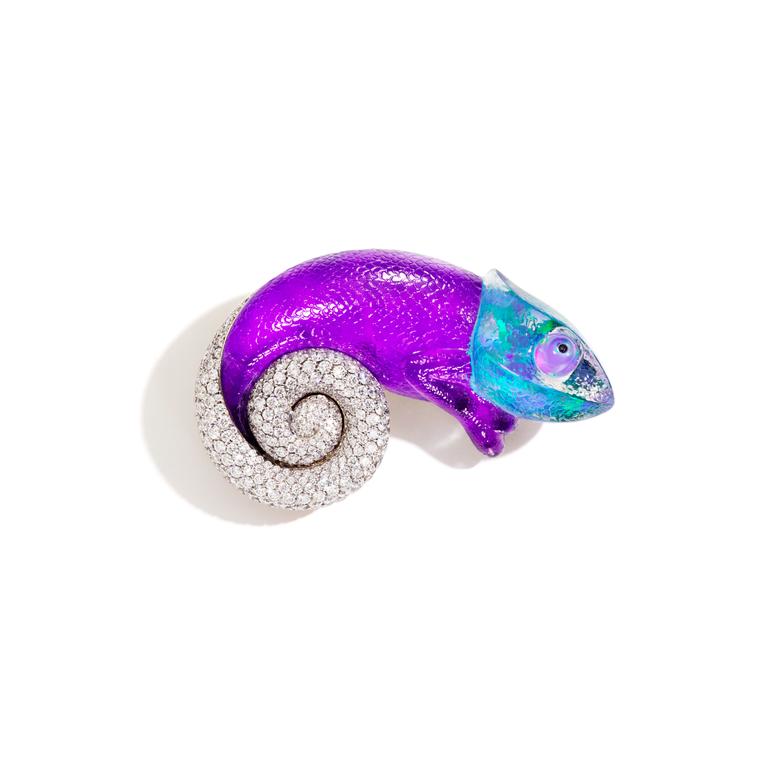 From a delightful pair of dachshunds to an adorable snail, the animal kingdom has once again proved a potent muse for jewellers this year. Insects, bugs, sea life, birds, snakes, even a little-known mammal – the diversity of creatures captured in precious metals and gemstones never ceased to amaze.

At the beginning of the year, Chopard provided the perfect antidote to the January blues when it unveiled its haute joaillerie collection during Paris Couture Week. Never one to shy away from extravagant colour combinations, the Swiss maison unveiled a spectacular, transformable butterfly bracelet, top, with the timely theme “a flight towards spring”. Two butterflies set with topazes, Paraiba tourmalines and amethysts perch gracefully on gem-set foliage crafted from multi-coloured titanium, chosen not just for its lightness but also because it can be coloured to match the stones. And whoever the lucky owner is, they can get plenty of wear out of this technicolour jewel because the butterflies can be detached from the bracelet and worn as a pair of earrings and a brooch.

The Oscars in February presented our second opportunity to marvel at the craftsmanship involved in bringing a creature to life in high jewellery form. Whilst most of the stars opted for surprisingly staid diamonds, Whoopi Goldberg created a stir with her unconventional choice of red carpet jewellery: an incredible, one-of-a-kind pearl octopus hand bracelet by Sevan Bicakci, which took the Turkish designer more than a year to complete.

In April, Tiffany launched its 2016 Blue Book called The Art of Transformation, designed around a central theme: the wonder of nature. An annual celebration of design, craftsmanship and the finest gemstones, it was a real triumph for design director Francesca Amphitheatrof, who gave us many memorable pieces, including this colourful Starfish cuff with blue sapphires, diamonds and tsavorites.

In the run-up to the Olympics in Rio, we devoted many articles to Brazilian jewellery designers, from internationally renowned brands like Carla Amorim to names that are little-known outside South America. If a single jewel could encapsulate the spirit of last summer’s Olympic games, it would be these parrot earrings by Amsterdam Sauer, a jeweller that deserves more widespread recognition.

“Brazilians like to be playful with their jewellery. We like to mix and match styles and gems, especially coloured ones,” says Stephanie Wenk, the 20-something creative director who has brought a refreshing playfulness to the brand. “Brazil is sunny and colourful, with an amazing flora and fauna, and this is reflected in our taste and style.” What could be more sunny and colourful than a pair of parrots glowing with yellow and blue sapphires?

The insects of the animal world get a bad rap, and it is quite a skill transforming them into a covetable piece of jewellery. Mexican designer Daniela Villegas is the queen of creepy crawlies, and this year alone we have featured her bejewelled spiders and beetles crawling over rings and creeping around chokers.

There was one insect in particular that stole my heart, however – a multi-coloured centipede pendant trailing a confection of rubies, tourmalines, opal, tsavorite, colored sapphires and diamonds, along with lots of little legs, down the breast bone.

British jeweller George Pragnell also amazed with its startlingly beautiful rendition of a Summer Bug, with a black opal body, cabochon coral eyes and carved chalcedony wings, topped off with a rare Fancy Intense greenish blue diamond. If there is a more beautiful bug out there, I am yet to encounter it.

Animals are a recurring theme at Van Cleef & Arpels, which has a long and distinguished history of plundering the natural world for inspiration. There are, of course, the Van Cleef butterflies, which flutter between the fingers in one of the maison’s most iconic designs, but you don’t have to dig deep to find other memorable examples, from the pink sapphire starfish from the Seven Seas high jewellery collection to a majestic koi carp wrapped around the wrist, gleaming with spessartite garnets, a watch face concealed in its mouth.

This autumn, Van Cleef brought a smile to every jewellery journalist’s face with the launch of L’Arche de Noé, a high jewellery collection devoted to animals – 60 pairs of them, in fact. With characteristic charm, it featured squirrels crouched on an opal, noses touching, two chubby owls in purple sugilite and chryosprase, and the sweetest duo of dachshunds frolicking playfully, their distinctive two-tone colouring captured in black onyx and diamonds.

The award for hyperrealism goes to Russia’s king of enamel, Ilgiz F, who brought his nature-inspired jewels to London in October after an exhibition at the Moscow Kremlin earlier in the year – the first living designer to be honoured with a solo show there since Pierre-Karl Fabergé in 1917.

Flowers and birds are a recurring theme in Ilgiz’s work, but it was this snail – a slippery gastropod that has appeared in bejewelled form only once before, to my knowledge, at Hemmerle – that stole the show in London, the subtle colour variations in its whorled shell hand-painted in vitreous enamel.

In late autumn, Bulgari revealed the latest incarnation of its famous snake: a collection of Serpenti Seduttori jewels that homes in on its hypnotic eyes. The versatile collection ranges from everyday jewels to a regal diamond and emerald Serpenti Queen necklace, with the strikingly modern, and affordable, snake pendant, made up of hexagonal rose gold scales with amethysts for eyes, proving that there is plenty of bite left in this famous snake yet.

When news of Patrick Mavros’ latest Pangolin collection landed in The Jewellery Editor’s inbox in November, we were won over not just by the unusual beauty of the little-known mammal that inspired the jewels, but also by the Mavros family’s generosity.

In a bid to help save the endangered pangolin, the most trafficked animal in the world, the African luxury brand collaborated with the Tikki Hywood Trust on a unique collection of jewels focussed on the pangolin’s distinctive scales, with 10% from each sale going directly to the Trust. If you haven’t yet seen the jewels, you’re in for a real treat. Available in rose or yellow gold and silver, the bold and beautiful collection is truly individual.

Wrapping up the year in quintessential Italian style was Vhernier and its chameleon brooch, which is one of a kind and, unfortunately, already sold. So lifelike is this lizard that you can make out the scales on its back, its beady eye peeping out from an iridescent opal head – undoubtedly one of the most colourful jewels of 2016, as well as the cutest.