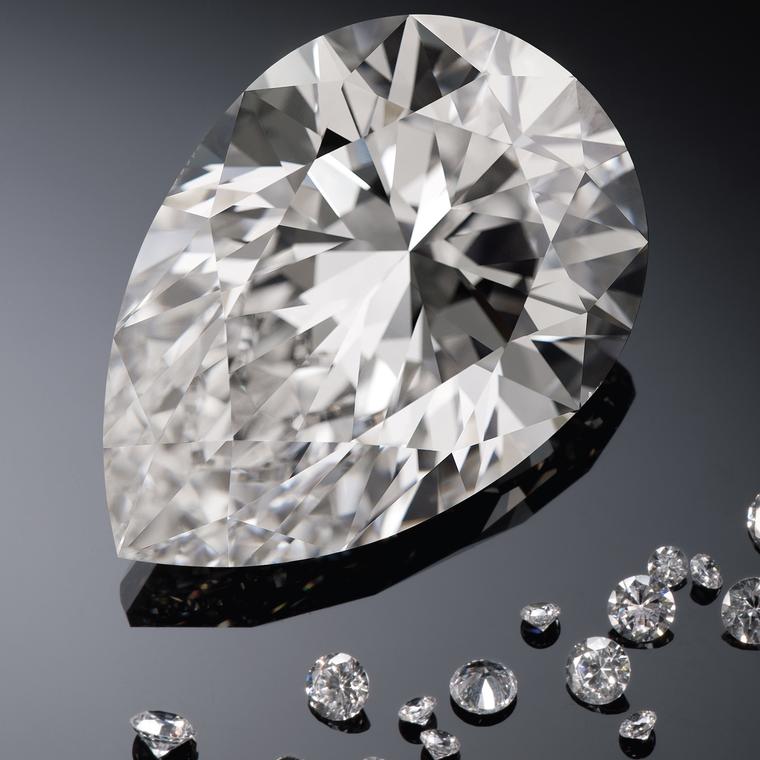 Some people mark their year by the places they have travelled, the parties they have been to or the books they have read. Here at The Jewellery Editor, our years are punctuated by the dazzling appearance of mega-diamonds, those carat-heavy pools of light that are destined to make history.

It usually starts with an email from Sotheby’s or Christie’s announcing the arrival of a celebrity stone. And like all stars, they are short on time and big on personality. Often, only a day or two’s notice is given and, if the diamond is a true rock star, no details will be released until the stone is unveiled.  The photocall is short and sweet, and once the news crews have left, I get the chance to handle the stone myself, which is something like receiving a hyper-dose of Vitamin Feelgood.

In mid-March the first major diamond of the year crossed my hand. It was the 10.10 carat De Beers Millennium Fancy Vivid Blue diamond, with a pre-sale estimate of $30-35 million, which sold at Sotheby’s Hong Kong for $32 million. Though no larger than an almond, it is in fact the largest blue diamond of its kind to ever come up for sale. Just scraping over the magical 10 carat mark, with a top-of-the-scale colour intensity of Fancy Vivid and a near-perfect Internally Flawless grading, there was no doubt that this rock was going places.

It is a real treat to see a diamond this blue, clear as a summer morning with such perfect and even saturation. And it comes with a piece of history many of us will remember: as one of the De Beers Millennium diamonds shown at the Dome in 2000, it was saved just in time from robbers thanks to a tip-off to the police. Unknown to the would-be thieves, the real diamonds were replaced with replicas and the criminals were caught red-handed as they attempted to smash the display cabinets having rammed through the wall of the Dome in a digger.

Hot on its tail, another spectacular blue diamond made an appearance, this time at Christie’s in London as part of its whistle-stop tour of the world. The 14.62 carat Oppenheimer Blue sold at Christie’s Geneva for $57.7 million, setting a new world record for the highest price paid for a blue diamond at auction or, indeed, for any gemstone sold at auction.  Amazing to think that you can slip almost $60 million dollars onto your finger.

The Argyle Tender is billed as the most exclusive sale in the world. This annual closed-bid auction is the only way for a select group of 150 bidders to secure one of these highly sought-after pink diamonds.  The Argyle mine in the remote north of Western Australia produces 90% of the world’s pink diamonds making it virtually the sole source of this highly precious gem. Held in early October, these pea-sized diamonds pack a punch with prices rising to an excess of $1 million per carat.

This year, 63 stones were presented and most unusual was the violet diamond, so rare that most gemologists will never set eyes on one in their lifetime. Each of these diamonds represents the greatest concentrations of wealth known to man, yet they are so small they are handled with tweezers. Discover the five hero diamonds from the Chroma Collection 2016 as explained by Josephine Johnson, Manager of Argyle Diamonds, who has overseen their journey from mine to final polishing, in the video above.

My next rendezvous began with a phone call, promising a very big surprise. And as the address was the boardroom of Graff’s London headquarters, I suspected this was no exaggeration. I was not disappointed. Weighing down my hand, the Graff Venus is a mesmerising heart-shaped 118 carat diamond, the largest of its kind in the world. And because it is one of Mr. Graff’s diamonds, size alone is not enough. Stacking up its staggering merits, it is also a top-notch D colour and graded as a Flawless Type IIA stone. Is this the most romantic diamond in the world? Perhaps, but as wonderful as sounds, this diamond is just too big for an engagement ring. And you don’t often hear me saying that.

The second round of auctions always comes towards the end of the year. And shining through the November gloom, Sotheby’s presented the 8.01 carat Sky Blue diamond. Most diamonds are brought to auction un-set, but I was happy to see this magnificent emerald-cut diamond in a Cartier ring. And need I tell you that it was just my size. With a pre-sale estimate of $15-25 million, it fetched $17.1 million in Geneva. Probably on some lucky person’s finger as I type, hear David Bennett, Worldwide Chairman of the International Jewellery Division at Sotheby’s, tell me about this rare diamond:

Most diamonds come with a back story: the near miraculous moment of discovery in a mine or a history of famous owners.  But the biggest diamond I have ever held appeared almost out of the blue. Shrouded in darkness behind an unmarked door, I was the first person to be invited to see the 228.31 carat Harrods Diamond.

To say it eclipsed my large hand is no hyperbole. This remarkable G Colour VS1 stone had laid silently glowing in the vaults beneath Harrods until its owner decided it was time to find it a new home. Just think how many people had unwittingly walked over what is likely to be one of the most valuable diamonds of our lifetime as they sniffed perfumes or perused loose-leaf tea on the ground floor of Harrods. I spent 15 happy minutes soaking in its light, the security entourage watching my every move.

What 2017 will bring is anyone’s guess, but we will be there to see the greatest diamonds in the world before they disappear into high-security vaults.