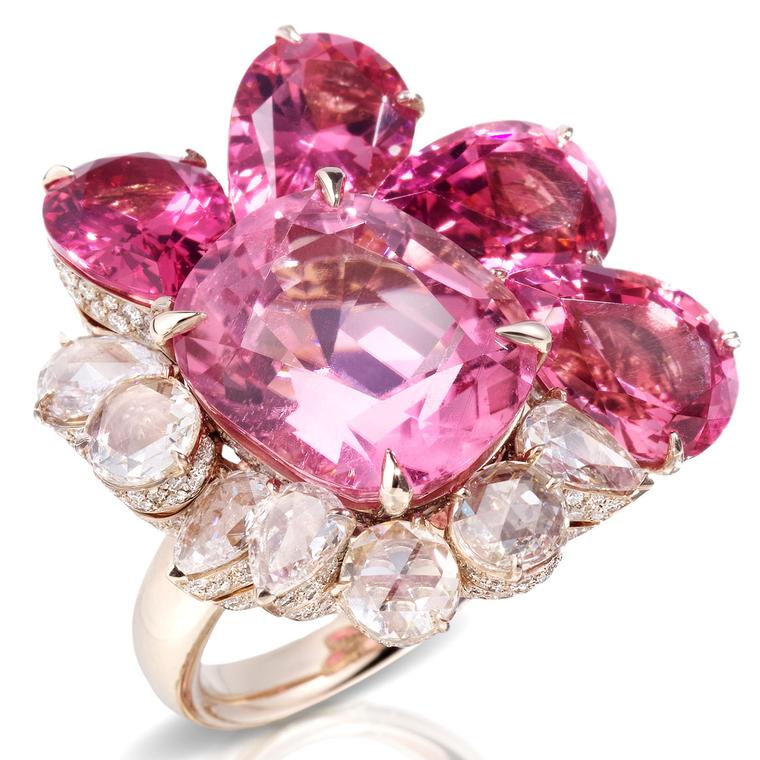 Much anticipated, Pomellato has revealed its latest dazzling array of Pom Pom jewels, its most precious high jewellery creations for the year. Using its signature bold colour palette and daring volumes, the new arrivals are Pomellato to the core. Elevated to the realm of haute joaillerie thanks to the quality of the stones and craftsmanship, each of them is a one-off or of very limited production.

Pom Pom jewels are the crowning glory of Pomellato’s creativity. The design team pore over the shimmering array of precious stones assembled from around the world to carefully select the most remarkable and rare examples. Starting from the stone, a design is created around it to highlight its unique nature and qualities of colour, saturation or brilliance. The result is jewels that shine bright with a strong individuality. Given the one-off nature of these jewels, only a handful arrive at Pomellato’s boutiques around the world, and its Brook Street address in Mayfair has been graced with the presence of a selection of rings, earrings and bracelets that add a fabulous burst of colour to the winter light of London.

Known for its easy-to-wear jewels, Pomellato was founded in 1967, a time of great social change when women were changing the way they dressed and presented themselves to the world. Jeans became the new uniform and Pomellato’s bold, unfussy jewels slipped right in with the brave new look of the time. Almost 50 years on, remaining faithful to the original design criteria, over the decades Pomellato has mellowed into becoming one of Italy’s favourite jewellers with a penchant for succulent coloured gemstones, highly stackable and collectable rings and chunky gold chains that have become Italian wardrobe essentials.

This year’s Pom Pom collection is an explosion of colour. The outsize proportions take the cocktail ring to new heights of glamour, serving up a bright crush of pink tourmalines and diamonds, or milky moonstones with velvety-blue sapphires. As if lit from within, a dome of green beryl glows at the centre of an elaborate white gold mesh, dotted with 79 old mine-cut diamonds.

Pomellato’s famous chain bracelets are treated to a dusting of fiery red spinels, zesty demantoid garnets, deep-green emeralds and blue or orange sapphires. Great skill and finesse is required from the jewellers to entirely set the bracelets with precious stones yet maintain a smoothness and movement between the links. This is where Pomellato’s decades of experience and savoir faire in casting and gem-setting techniques is evident. The bracelets are all made from Pomellato’s propriety alloy of rose gold, mixed crucible by crucible in its in-house foundry to create the rich glow for which it is famed. With a wink to the latest trend for hoops, mandarin garnets adorn a pair of rose gold earrings.

As CEO Sabina Belli says: “Pomellato jewels are not a financial investment but a choice from the heart and spirit.” And I challenge you not to feel a tug in your heart on seeing these delectable jewels, which beam out confidence and optimism.

Adding to the tempting proposition presented by the mouth-wateringly rich hues of the precious stones, clients who purchase a Pom Pom jewel from the London boutique are offered an invitation to visit Milan. Here they will discover the lesser-known treasures of this city as they are treated to an insiders’ view of Italy’s most stylish and food-obsessed centre. Highlight of the visit is a behind-the-scenes tour of Casa Pomellato to witness first-hand the creation process. From first sketch on paper to final polishing, a team of over 100 skilled craftsmen and women creates each Pom Pom jewel entirely in-house, a fact Pomellato is rightly proud of and wants to share with its most-valued clients.