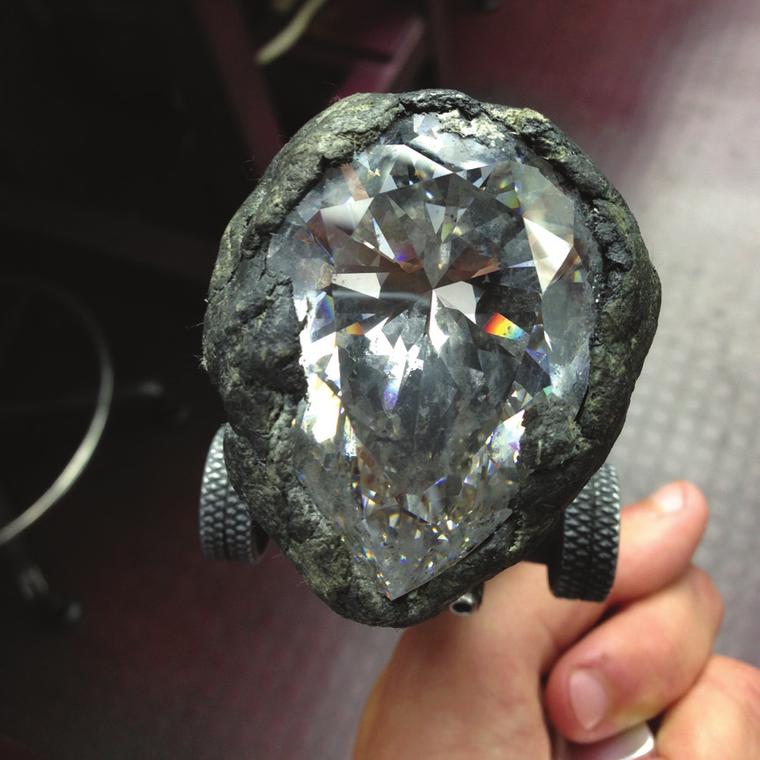 If you go to Harrods today, on display in a small, darkened room on the Ground Floor is perhaps the most valuable object ever to be sold at Harrods. Shining out from the dark is The Harrods Diamond, a 228.31 carat pear-shape stone – a rare specimen and likely amongst one of the largest diamonds of our times. A quality diamond of over 100 carats is impressive; over 200 carats puts the stone into another league.

The diamond has been graded a G colour with VS1 clarity by the Gemological Institute of America. G is the fourth colour on the scale placing it at the top of the ‘near colourless’ spectrum, while VSI indicates that flaws are visible in the table facet. Not perfect, but pretty close, the ideal being D colour (totally colourless) and F clarity (flawless).

Nonetheless, the size of the Harrods Diamond is out of this world. To put it into perspective, the most famous cut diamond in the world is the 530 carat Cullinan I (D colour) that sits at the centre of the sceptre of the British Crown Jewels, safely stowed in the Tower of London. Outsized white diamonds of over 200 carats garner fame, and stars of this arena include the 203.04 carat Millennium Star, the 205.07carat Red Cross and the 234.65 carat De Beers.

Graff Diamonds, which, according to its website, claims to have handled more important diamonds than any other diamantaire, last had in its possession a diamond of over 200 carats in 2008, the 243.96 carat Magnificence. The largest white to recently come to auction is an 118 carat D colour Flawless diamond that broke world records in Hong Kong in 2013 when it sold for $30.6 million.

Most remarkable diamonds of this size come with a story: a catalogue of famous owners or, for newer discoveries, a eureka moment at the mine. However, the Harrods Diamond appears to have literally popped up out of the blue. The Harrods press release states: “In the Safe Deposit at the heart of the world-famous Knightsbridge store, home to some of Harrods clients’ most treasured possessions, an incredible diamond has been hiding, a precious stone that is now referred to as “The Harrods Diamond” by its owner [who chooses to remain anonymous] and the stone’s Harrods custodians.” Looking at the photographs, it appears that the stone has been cut recently, suggesting that the diamond that emerged from Harrods was a rough. The size of the rough and its provenance is anyone’s guess.

Helen David, Chief Merchant at Harrods, says: “We are thrilled to unveil one of the world’s rarest diamonds, the so-called Harrods Diamond, named after the iconic Knightsbridge store.  It is rare that stones of this weight, cut, polish and symmetry are sold outside auction, so this is an exceptional opportunity for Harrods’ customers and a very exciting moment in Harrods’ history.”

Viewing is by appointment only. What other secrets Harrods’ vaults may hold is an intriguing question.