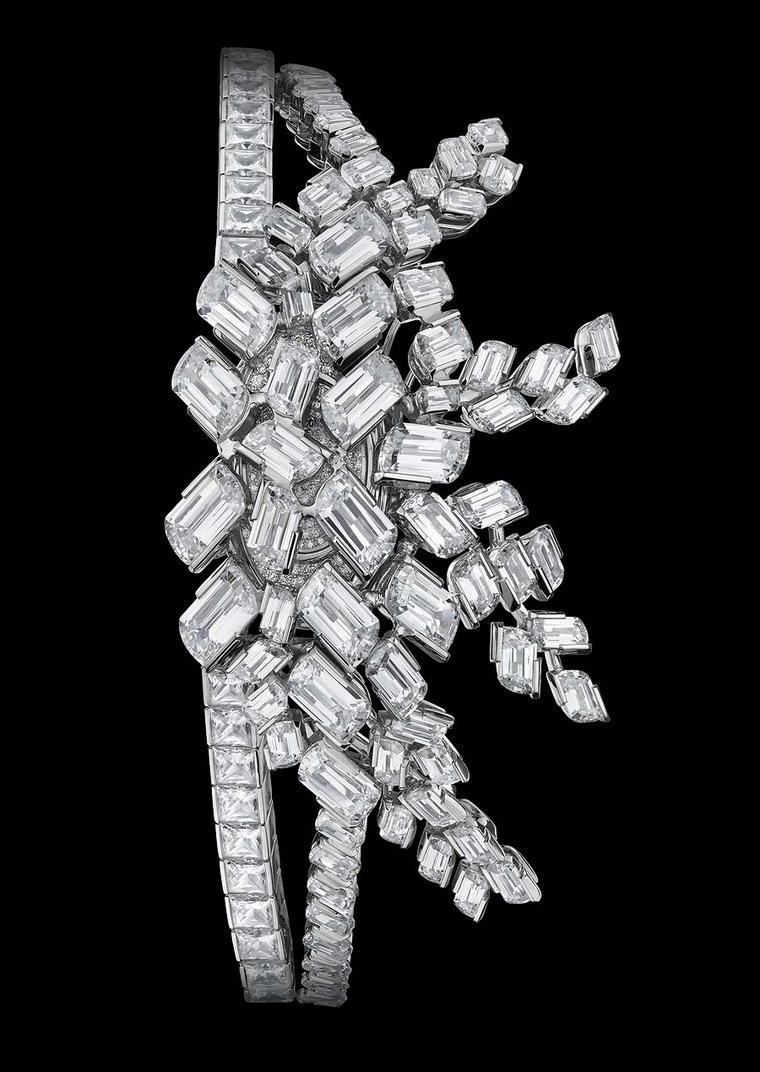 This spring, Vacheron Constantin opened its first boutique in Britain on Old Bond Street in London. A hotspot for watchmakers and jewellers alike, Vacheron Constantin is not just the oldest watch manufacturer on this exclusive thoroughfare. It is the oldest watch company in the world, with its original shop, opened more than 100 years ago, on the Quai de l’Ile in Geneva.

The full range of collections is on display at the boutique, ranging from exquisite complications to meticulously hand-painted dials. But in this auspicious year for the brand, Vacheron Constantin has chosen to mark the opening of its new London boutique by launching a travelling exhibition of timepieces of an entirely different kind.

Until 15 October 2013, visitors to the Old Bond Street boutique will be able to marvel at a collection of six Vacheron Constantin Metiers d’Art High Jewellery watches that have, until now, never been displayed together in a retail environment. But not only that. These watches, of which only one or two models exist of each and which take around 6,000 hours to craft, will also be available to buy – a rare opportunity to purchase one immediately without the two-year wait that buying a Kalla usually entails.

Highlighting the collection is the original Vacheron Constantin Kallista, created in 1979 and, at £5 million, the most expensive watch ever made at the time. In 1979, a year in which quartz watch movements were making their presence felt, Vacheron Constantin decided to swim against the tide and focus its attention on a new and previously unexplored market: bejewelled watches for women. But in accordance with the horological tradition of excellence that was the driving force behind Vacheron Constantin, these would combine watchmaking virtuosity with extraordinarily skilled gem-cutting and setting techniques. The result was the one-of-a-kind haute joaillerie Kallista – Greek for “the most magnificent”.

Commissioned by a client who wished to remain anonymous and designed by the artist Raymond Moretti, it took 6,000 hours of work to realise what was the most costly jewellery watch of its time, carved from a 1kg solid gold ingot and set with 118 flawless emerald-cut diamonds.

The owner of the watch remains a mystery, but its influence continues to be strongly felt at Vacheron Constantin. In 1981, the Kallista inspired a series of high jewellery diamond watches with the name Kalla – the ancient Greek word for “beauty” – which the Swiss watchmaker continues to add to today, each aesthetically very different from the last but united by two things: extraordinary diamonds and the finest mechanical engineering.

The models on display at the Bond Street boutique are a fascinating window into the world of Vacheron Constantin high jewellery watches. The Métiers d’Art Lady Kalla, fully set on the dial and bracelet with 125 emerald-cut diamonds, won the 2001 “Geneva Watchmaking Grand Prix” and is imbued with the spirit of the original Kallista. The Kalla Duchesse, launched in 2006, took Vacheron Constantin’s mastery in high jewellery watches to the next level.  Each of the baguette, square or trapeze-cut diamonds – 162 or 182, depending on the size – was individually cut to fit the tonneau-shaped design.

With 2009’s Lady Kalla Flame, Vacheron Constantin pioneered a new type of gem cut. Called the “flame cut”, each diamond had 57 facets and was shaped like a roaring flame, flickering and dancing in the light. In recent years, the brand has launched two secret watches, both of which feature the unique Vacheron Constantin “flame cut”. The time on the Kalla Haute Couture a Secret is revealed on tiny white gold hands that are only visible if you look up close. The hour on the Kalla Haute Couture a Pampilles is hidden behind a diamond-set cover, reviving the tradition of “secret” watches, which enabled 19th century ladies to check the time in a discreet manner.

After London, the exhibition will be travelling to Geneva and then Paris. An opportunity for watch lovers throughout Europe to admire the artistry, craftmanship and watchmaking know-how that come together in every Vacheron Constantin Metiers d’Art high jewellery watch, the six exceptional watches are on display at Vacheron Constantin’s Old Bond Street boutique until 15 October 2013.