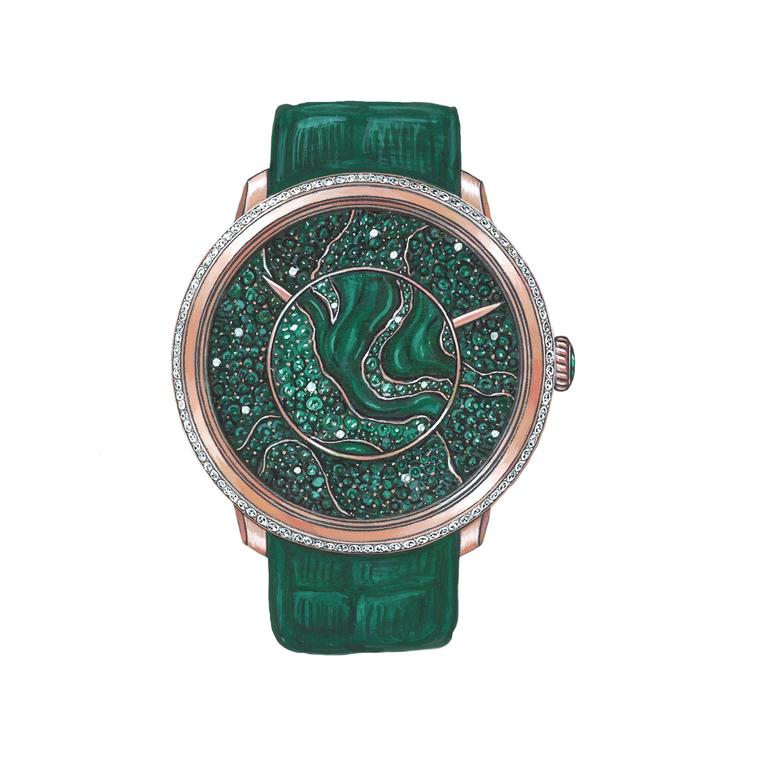 The new Fabergé Dalliance collection of ladies’ watches and a new addition to the Fabergé Visionnaire collection for men – a dual time zone model – have been unveiled for the first time at Baselworld 2016. These contemporary watches, which reference Fabergé’s illustrious past and ability to surprise and delight, are united by volume, rotundity and artistry – characteristics that we associate with the brand’s iconic Easter Eggs and which have been cleverly interpreted in this 2016 line-up of Fabergé watches.

The name Fabergé has a magical ring to it, conjuring up nostalgic visions of Russia’s Imperial family as they exchanged lavishly decorated jewellery eggs at Easter. It evokes the splendour of the Romanov dynasty and captures the heyday of the Belle Époque era, when goldsmith Peter Carl Fabergé created jewels and precious objets d’art of sumptuous beauty to astound and amuse his patrons. His legendary creations, renowned for their vibrant use of colour and ingenious surprises, attracted worldwide attention, making Peter Carl Fabergé very much the jeweller du jour, before the Russian Revolution of 1917 brought a tragic end to the Romanovs and forced the Fabergé family to flee Russia.

Like the Easter Eggs that symbolise renewal, the Fabergé saga was reborn in 2007. The first watch collections for men and women made their debut in 2015, encapsulating the spirit of mechanical ingenuity and enchanting flights of fantasy and artistry cultivated by Peter Carl Fabergé.

The element of surprise and discovery is at the heart of Fabergé watches, recreating the sense of wonder Empress Maria Feodorovna must have experienced when Tsar Alexander III gave her the Hen Egg in 1885 – the first in a long line of Fabergé Easter Eggs. Crafted from gold, the white enamelled shell of the Hen Egg opened to reveal a rich yellow gold yolk. Beneath this yolk there was another surprise consisting of a multi-coloured chased gold hen containing a diamond replica of the Imperial Crown and a ruby pendant egg.

In order to make the watches perform complicated mechanical miracles, Fabergé has called upon the skills of veteran watchmaker Jean-Marc Wiederrecht once again this year. Last year marked the debut of Fabergé as a watchmaker with two ladies’ watches inspired by the famous Fabergé Peacock Egg of 1908 and the Winter Egg of 1913. The mastermind behind the Lady Compliquée Peacock watch – marking Fabergé’s debut as a watchmaker at Baselworld in 2015 – Wiederrecht’s complication secured the High Mechanical Prize at the prestigious GPHG awards in 2015.

Dipping into the brand’s rich heritage, the designers at Fabergé were inspired by a rock crystal desk clock made in around 1910. Henrik Wingstöm, one of Fabergé’s 500-strong team of craftsmen at the height of its activity in St. Petersburg, created the clock with a rock crystal man-in-the-moon relief in its centre. Because it was sculpted into the rock crystal and protruded in a gentle orb, centrally mounted hands to indicate the hours and minutes were out of the question, so Wingström had to come up with a solution. His idea to incorporate indicators on a peripheral enamel ring solved the problem and has been recreated in this contemporary women’s watch.

The new Dalliance Lady Levity watch, glowing in a cloud of mother-of-pearl, recreates the relief of a man-in-the-moon in the centre of the dial, protected under a domed sapphire crystal to give the decoration volume and rotundity. Once again, Wiederrecht and his team of horological experts were called upon to design the mechanical AGH6911 calibre at the heart of the new 36mm Lady Levity. Like the original Fabergé table clock, the traditional hands have been replaced with stylised indicators to display the time. The hours are read with a rose gold crescent Moon indicator, and a rising Sun tracks the minutes against a white mother-of-pearl dial with grey painted indices.

Catering to contemporary tsarinas, the Dalliance Lady Levity watch can be customised to your heart’s desire. Instead of a Moon, would you prefer a Sun or an astrological sign? That’s not a problem, thanks to a technique developed at Fabergé, which allows the chosen motif to be printed in platinum on the domed sapphire bubble and then set with mother-of-pearl to match the dial.

Other new women’s watches in the 2016 Fabergé Dalliance collection are spectacular high jewellery watches glowing with the verdant light of emeralds. Gemfields, the world’s leading producer of ethically sourced gemstones has, since 2012, been the parent company of Fabergé. This extraordinary alliance shines through in these two unique creations, christened Libertine I and II.

The emeralds were mined in the Kagem Mine in Zambia, currently the world’s single largest producer of emeralds. A tribute to Peter Carl Fabergé’s passion for bold colours, the dial of Libertine I features swirls of bright green in fluid motion, framed by a bezel set alight with brilliant-cut diamonds. The central dome of the dial represents the relief of the geographic terrain of the Zambian mine and uses snow-set and polished emeralds, along with rough, hand-carved emeralds delineated with fine gold filigree, to represent the region’s rivers. Like its sister the Lady Levity, the 36mm Libertine models feature the same system for reading the hours and minutes, with the hands placed on a peripheral disc to leave the plump volume of the spherical centre undisturbed.

Libertine II, presented in a 36mm white gold case, features a more geometric dial with a captivating sense of movement. The raised central dome is decorated with satin-finished strands of emeralds, arranged like the blades of a windmill. Placed on top of the blades is a stylised Sun with rays made from white gold and punctuated with diamonds. In the centre of the Sun sits a gorgeous cabochon-cut emerald with a swirling motif. This stunning dome, with its optical illusion of movement, is firmly anchored on a bed of snow-set diamonds while the time is read with two, blued German silver arrows.

All three ladies’ models from the Fabergé Dalliance collection are fitted with movement AGH 6911, which has been created exclusively for the brand by Jean-Marc Wiederrecht at his manufacture Agenhor. The challenge for Wiederrecht was to create a dome in the centre of the watch and find a way to get the hands to orbit the dome from underneath, without the aid of a traditional central axis. Beautifully decorated with perlage on the mainplate and Cotes de Genève stripes on the hand-chamfered bridges, the mechanical movement has a 50-hour power reserve before it will need to be rewound.

Men have not been left out of the equation in 2016, and last year’s Visionnaire I Flying Tourbillon watch is revisited in the Visionnaire DTZ dual time zone model. Wiederrecht was called upon to find a logical and intuitive method of displaying two time zones simultaneously and came up with a similar concept to the Dalliance collection.

Reminiscent of Rome’s Pantheon, with its central oculus, the Visionnaire DTZ features a raised central dome with an aperture to indicate the hour of the second time zone, displayed on a 24-hour numerical disc, eliminating the need for a night/day function. Like the Dalliance watches, the central dome only reveals its information when viewed straight on and disappears when viewed from the side. Two versions of the 43mm Fabergé Visionnaire DTZ will be produced – one in titanium with rose gold, and the other in black DLC-treated titanium in white gold. The sapphire caseback allows a view of the AGH 6924 automatic calibre specifically developed by Agenhor for Fabergé, but don’t expect to see the oscillating weight. Wiederrecht has placed the rotor on the dial side, and you can watch its movements underneath the dial’s colour-matched sapphire crystal hour ring.