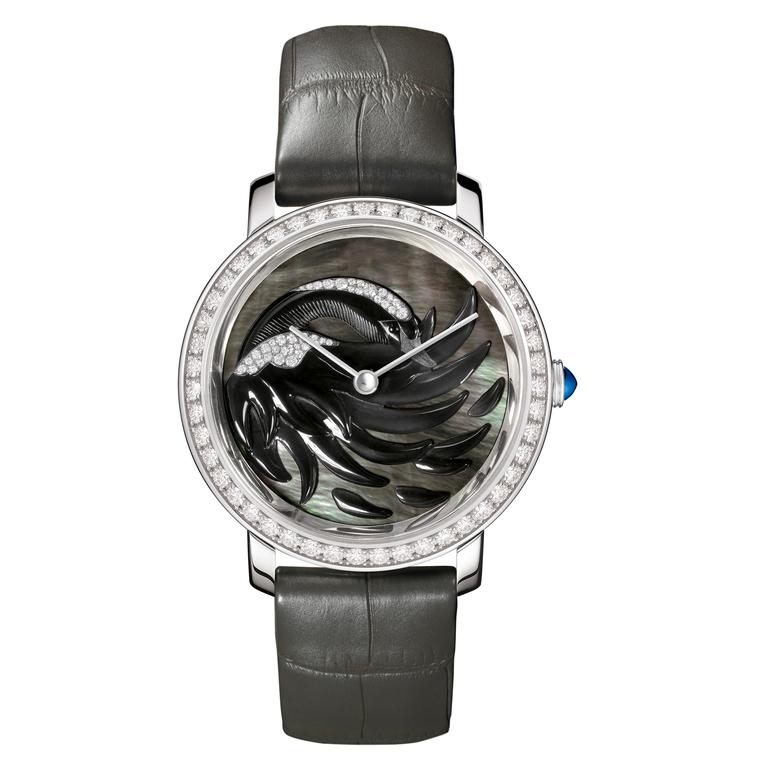 Although the watch industry might justifiably classify 2016 as the year of the ugly duckling – due to a medley of factors including lower sales in China, overpricing and overstocking, and an increase in online sales for luxury products – we’d like to bid a fond farewell to 2016 with a short swan song and welcome 2017 with a bright cock-a-doodle-doo as the 10th animal in the Chinese Zodiac makes its boisterous entry to initiate the Year of the Rooster.

Boucheron’s Epure Cypris swan watch provides an eloquent metaphor for the troubled year most watch companies have endured in 2016. Full of drama and tension, the black swan appears to be swept away by a current of dark waters. An object of intense beauty and craftsmanship, the swan’s body is hand-sculpted from black Tahitian mother-of-pearl and its neck and chest are picked out in brilliant-cut diamonds. The jet-black plumage fans out against a fast-flowing river made from iridescent black mother-of-pearl contained by a gleaming diamond-set bezel and the classic Boucheron cabochon in the crown.

On 28 January, the Chinese Year of the Rooster officially gets underway taking over from the Year of the Monkey. Those born under the sign of the rooster are said to be sociable, confident, proud, courageous and loyal and yes, a wee bit cocky at times. Once again, Switzerland’s leading watch brands seize the occasion to create special editions and deploy their best talents to celebrate the spirit of the ruler of the roost.

Chopard gets a head start on the rooster dial with its rose gold L.U.C XP Urushi Year of the Rooster watch, above, made with the ancestral technique of Urushi lacquer. Minori Koizumi, a Japanese Urushi master, was in charge of painting the magnificent cockerel on the dial. Urushi is made from sap from the Japanese varnish tree – aged and treated to become a lacquer – which is then mixed with tiny fragments of mother-of-pearl to add light, radiance and texture to the composition. With his head held high and chest puffed out, the proud cockerel crows as the sun goes down surrounded by eight gladioli, both symbols of good luck in Chinese culture.

Vacheron Constantin, the world’s oldest watch brand, has unveiled its very own rooster watch, below, in time for the celebrations ahead. The foliage on the dial is etched directly in the metal and then accented with Grand Feu bronze-coloured enamel to create a rich Oriental background for the lifelike rooster, entirely hand-engraved in pink gold. So as not to detract from the impressive spectacle, the watch has no hands and instead reveals the jumping hours and minutes as well as the day and date indications through apertures on the dial thanks to a technically advanced in-house mechanical movement.

Ulysse Nardin is also strutting its stuff to draw attention to the fact that it will be showing its watches for the first time at the SIHH this year.  The dial of the Classico Rooster watch, below, is made with champlevé enamel. A rare art form mastered by very few, the champlevé technique involves carving cells or small compartments – with a tool called a burin – directly into the metal and then filling the cells with enamel, which in turn is fired in the kiln.  The result is one of spectacular depth, texture and colour.