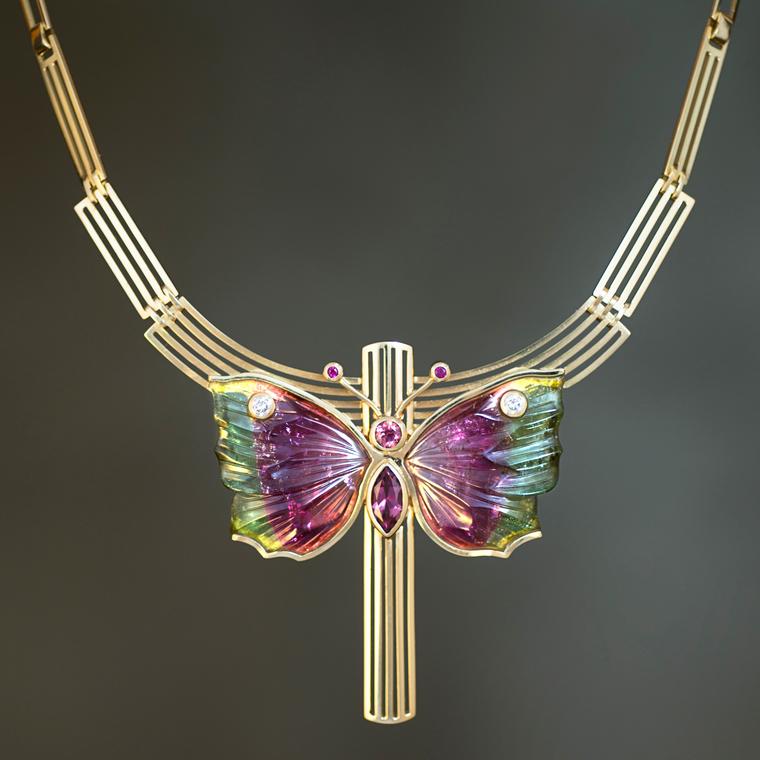 The traditional Irish jewellery filling gift shops the world over is defined by Celtic knots, ornate crosses and the Claddagh – that classic design of two hands holding on to a heart. Modern Irish jewellery, however, is a far more sensual affair, with a tight-knit community of fine jewellers redefining the genre and bringing a luxurious edge through a revival of quality goldsmithing skills.

One of the leading figures in the Irish jewellery community is not actually of Irish descent, although after more than 50 years living and working in Kilkenny, the community very much considers Rudolf Heltzel one of their own. The German jeweller first came over to Ireland at the request of the Irish Export Board in 1965 to take up a teaching post at the government-run Kilkenny Design Workshops (KDW), which were set up with a view to improving standards of design and production in the country. In doing so, he started a legacy of metalwork education that is still producing jewellery stars to this day.

Heltzel, who will host an exhibition at the Royal Hibernian Academy in Dublin in November (3-5) to mark half a century of his work, followed up by a show in China, is a true master of his craft. He makes all his jewellery – including his latest series of bi-colour tourmaline butterfly pendants, above – by hand at his studio in Kilkenny, and the extra effort shines forth. “I have to stay clear of designs that equally well could be produced by casting, CAD-CAM and 3D printing,” he says. “I have to introduce a degree of difficulty and intricacy that could not be achieved other than by totally crafting by hand.”

Over the years, Heltzel’s dedication to craftsmanship has inspired many other jewellers in Ireland, which has a thriving craft scene. One of the students who benefitted from the course he set up was David McCaul, who runs fine jewellery brand McCaul Goldsmiths with his brother Barry McCaul in London’s Exmouth Market.

McCaul Goldsmiths, which sells through its store but also at shows like London’s Goldsmiths Fair, has a signature style defined by flowing, organic gold designs, as shown above. While McCaul admits his design work is somewhat subliminally influenced by Celtic motifs like trinity knots, he has a global pool of influences. “I was surprised when someone first pointed out [the Irish influences] in my work as I hadn’t noticed it,” he laughs. “What I really love, though, is Scandinavian design and French Art Nouveau – still minimal but that bit more organic.”

McCaul’s wife Jessica Poole is also a well-respected Irish fine jeweller. Her designs have fluid forms and soft clean lines – her Gathered Gold series reimagines gold as a luxurious fabric complete with elegant folds and ripples. She, too, prizes traditional skills and her area of expertise is diamond micro pavé setting, which she mastered during a course in Antwerp funded by a Queen Elizabeth Scholarship. She is one of the few women practicing this art in the UK, and is currently passing on her knowledge after taking on her own diamond setting apprentice in February.

Irishman Stuart McGrath, who set up fine jewellery brand Armoura Designs at the end of last year after an injury ended his previous career as an award-winning sculptor, is another of Ireland’s new contemporary fine jewellers – others include ex-Topshop designer Chupi Sweetman’s brand Chupi and Ros Millar, who was crowned New Designer of the Year at the UK Jewellery Awards in 2013 and will be launching a gold collection next year.

While McGrath has experimented with more cutting-edge designs such as his Trilliant ring, below – a squared gold ring with trilliant-cut diamonds for corners – he has not shied away from his heritage and his first collection was inspired by Irish natural history, landscape and myth. He believes history – in addition to the craft education legacy created by Heltzel – has much to do with what he terms Ireland’s “lively jewellery scene” today.

“[Ireland has] a strong heritage of metalwork, as can be seen in precious artefacts housed in the National Gallery of Ireland in Dublin,” he says. “It’s fortunate that many were so perfectly preserved in excellent condition in the bogs of Ireland as well as burial tombs such as Newgrange and Dolmen.” Sounds like a perfect way to spend the morning before discovering some of the newer jewellery talents that Dublin, and nearby Kilkenny, have to offer.