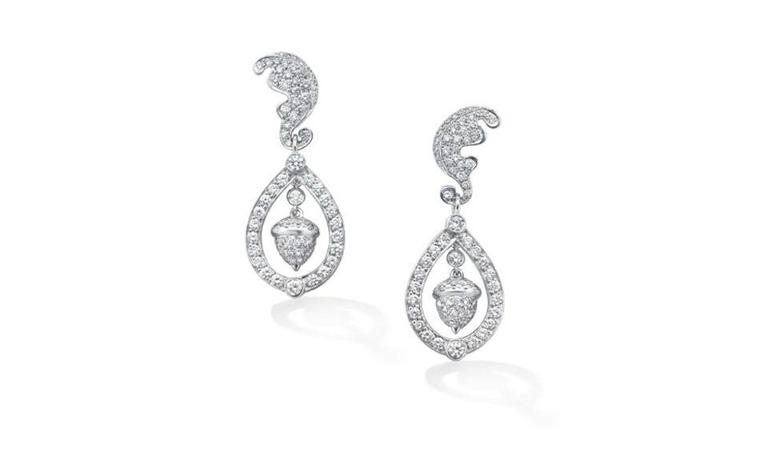 Kate’s wedding dress and her jewels will be on display at Buckingham Palace from Sunday 23rd July 2011. Though the Queen was heard to say that the headless mannequin wearing the royal gown was horrid, half a million visitors are expected. The “The Royal Wedding Dress: A story of great British Design” exhibition opens at Buckingham Palace displaying the Duchess of Cambridge´s wedding dress designed by Sarah Burton at Alexander McQueen as well as the Cartier Halo tiara lent to her by the Queen and her Robinson Pelham diamond earrings. The exhibition will run for ten weeks this summer. Though the Queen was overheard to say that headless mannequin on which the dress, veil and tiara are displayed was ‘horrid‘ at at preview with the Duchess of Cambridge, the exhibition is expected to sell-out and half a million visitors are expected. The headless ‘bride’ appears to float in the middle of the state rooms along with a replica of the wedding cake and Kate’s bouquet. The exhibition is the first chance for those who weren’t invited to the wedding to have a good look at the tiara. Like all of Kate’s bridal finery, the Cartier tiara was made London.The Cartier Halo tiara, lent by the Queen to Kate Middleton, now the Duchess of Cambridge, was made in 1936 by Cartier’s workshops in London known as “The English Art Works.” The tiara is made of platinum and the pretty wave-like shapes are described as ‘scroll’ or ‘palmette’ motifs. Here is the official description from the jewellery house: “The tiara, featuring 739 brilliant-cut diamonds and 149 baguette-cut diamonds, was first purchased by His Royal Highness the Duke of York on November 18, 1936 for his wife a few weeks before he acceded to the throne of England after the abdication of his brother King Edward VIII. Highly fashionable in the 1930s, this head ornament appears to create a real halo of light, hence its name: the “Halo Tiara”. It has been worn by Queen Elizabeth, who in turn gave it to her daughter, the future Queen Elizabeth II.  Princess Margaret, the Queen’s sister, also wore the tiara in the 1960s, while Princess Anne, the Queen’s daughter, appeared wearing it at several official ceremonies during the 1970s.” Read more by clicking here. Watch a video of comments on the tiara by clicking here. Kate’s earring, given to her by her parents, were also British-made by a small jeweller, Robinson Pelham Jewellers Ltd, tucked away in a Pimlico, something of a backwater next to smart Chelsea and historic Westminster. According to the press release from the jewellers, the design of the earrings was inspired by the family’s new coat of arms that includes acorns and oak leaves. The style is in keeping with the1936 Cartier Halo tiara lent to her by the Queen for the wedding day and, in a nod to the all-British wedding, the earrings were made by UK craftsmen. Look how the scroll motifs on the tiara are echoed in the top section of the earrings that sit against the lobe. The firm also made Pippa Middleton’s floral motif earrings as well as the tourmaline and diamond pendant and earrings worn by mother of the bride, Carole Middleton. The boys, father Michael Middleton and brother James, were not left out with gold stick pins for each of them, one with a golden acorn, the other a golden leaf.  Mr & Mrs Middleton commissioned the earrings for their daughter’s wedding. Read more by clicking here. With such interest in this exhibition perhaps this exhibition will travel beyond Buckingham Palace.