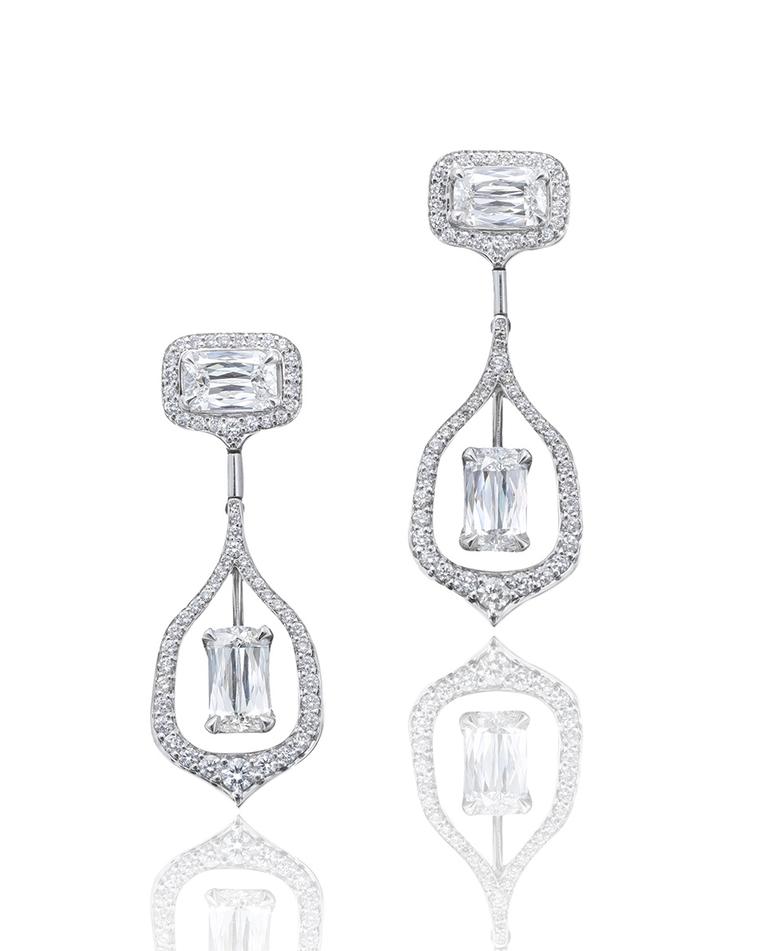 Born deep inside tubes of mineral-rich volcanic rock, diamonds rise to the surface from these primary deposits through molten lava, which pushes the volcanic diamond-bearing rock, called kimberlite, to the surface. India is the source of some of the world’s prominent historical diamonds and diamond lore, but the modern history of diamonds, and diamond cuts, began in South Africa when they were discovered in Kimberly in 1866.

Until 1989, the diamond trade was primarily controlled by De Beers. However, two significant discoveries brought major changes to the diamond industry. First, diamonds were discovered in Australia in 1985 – the infamous Argyle Diamond Mine – and, second, major deposits were found in Canada in 2000. Public awareness about “blood diamonds” also brought about a shift in the industry, and today the flow of diamonds comes from many sources and from deposits all over the world.

Fancy-coloured diamonds, as well as clear diamonds, hold a prominent place in high jewellery. Blue diamonds are highly coveted for both their beauty and rarity. The world’s most famous blue diamond is the extraordinary Hope Diamond. Blue diamonds are found in both South Africa and from the Argyle Diamond Mine in Australia. The Argyle Diamond Mine is also where most of the world’s natural pink diamonds are found – pink diamonds are mysterious, as no one knows what chemical composition causes their hue. Yellow diamonds come from South Africa, Australia and Russia. Although rare, yellow diamonds are still more common than blue or pink, and so may be a more affordable alternative for someone looking to purchase fancy-coloured diamond jewellery. Natural black diamonds, called carbonados, are also rare and are believed to come from outer space.

Diamonds have had a tumultuous past – wars have been fought over them, and they have even brought down rulers. They remain our most intriguing gemstone and are the standard for engagement and wedding rings. Whether you are looking for a simple, brilliant-cut, solitaire diamond ring or an elaborate, emerald-cut diamond necklace with radiant-cut accents, choosing a diamond is a significant financial investment.

A number of factors go into evaluating a diamond. With coloured diamonds, hue, tone and saturation of colour are more significant than brilliance or fire. For colourless diamonds, brilliance is paramount. A scale from D to Z is used to judge the shade of clear diamonds, with D being essentially clear, to an increasing range of colour. A “perfect” diamond in terms of structure and chemical purity will have no hue.

In 2005, the Gemmology Institute of America developed a system to grade the quality and craftsmanship of unmodified round brilliant diamonds. The five grades of excellent, very good, good, fair and poor were developed to assess the best combination of brightness, fire, scintillation and pattern.

Most consumers are aware of the standard four “Cs” for diamond grading – cut, clarity, colour and carat. Of these, many consider cut to be the most significant. The right diamond cut will make use of the diamond’s carat weight to best showcase its colour and clarity. The right diamond cut also takes into account the diamond’s natural shape and size, and then cuts it to maximise its fiery brilliance.

Among the classic diamond cuts, the round brilliant cut is considered the benchmark for diamond engagement rings and remains the most popular cut among consumers. Today’s round brilliant cut of 57 or 58 facets – depending upon whether the culet or point is included – has evolved from a long line of variations on diamond cuts and diamond jewellery design through the centuries. In 1919, Marcel Tolkowsky improved upon the cut by following the shape of the rough crystal in order to maximise shine and sparkle.

A cushion cut has larger facets than the popular round brilliant cut. Because of its soft, rounded corners, it is also known as the “pillow cut” and sometimes as a “candlelight diamond”. The cushion cut rose to popularity during the 19th century and remains a classic. Many of the world’s most famous diamonds, including the blue Hope Diamond and yellow Tiffany Diamond, boast a cushion cut.

Oval cuts and round cuts are nearly always a modification of the brilliant cut. The width of an oval cut can vary and is dependent upon personal preferences, but a length-to-width ratio of 1.35 to 1.50 is considered the classic oval cut. One example of an oval cut diamond is the football-shaped marquise cut, which derives its name from the Marquise of Pompadour, whose perfectly shaped mouth inspired King Louis XIV of France to commission a stone to be fashioned after it. Symmetry is critical to the marquise cut, and even a slight misalignment of the two end points or right and left sides can cause it to appear off-balance in jewellery design.

The pear cut is another modified brilliant cut combining a round and marquise shape, with a tapered point on the end. It comes in a variety of cuts from slim to wide and, in jewellery, the diamond is worn with the narrow end pointing toward the wearer’s hand, which makes the fingers appear longer and slimmer. The ideal shape for pear cut diamonds has the point lining up perfectly with the apex at the round end. The sides, or shoulders and wings, should form uniform, balanced curves with no straight edges.

As the name implies, the emerald cut was first used for cutting emeralds. However, it lends itself to diamonds as well, and some stunning high jewellery, particularly using coloured diamonds, is created using this diamond cut. These blue, pink and yellow diamonds are cut to accentuate their rich, deep sheen. Although emerald cut diamonds may have less fire than round brilliant cuts, the elongated shape and elegant lines give it a sophisticated look in jewellery design. The non-traditional shape may be more economical than round brilliant cuts. Of all the diamond cuts, this cut lends itself well to a simple setting in both rings and necklaces.

Many consider the Asscher cut to be the emblematic Art Deco cut. Joseph Asscher developed the original cut in 1902 and, after World War I, it became increasingly popular and was incorporated into jewellery by top Art Deco designers including Cartier and Tiffany. The octagonal shape is similar to an emerald cut but the 58 facets are larger and wider set. In 1999, Joseph Asscher’s grandson, Edward, visited the United States where he discovered the enduring popularity of the Asscher cut diamond. He returned to the Netherlands where he crafted an even more dynamic version of the earlier cut and, in homage to its legacy, he called it The Royal Asscher cut. The Royal Asscher has 16 more facets than the original, allowing it to catch the light better.

The intricate heart cut diamond is an extremely complicated diamond cut. If the proportions are not symmetrical, the diamond will look stretched out or bulky. The heart cut diamond also sacrifices some carat weight to create the shape, but what says love like a heart? Pink diamonds are excellent choices cut into hearts for sweetheart or engagement rings. Yellow diamonds are also popular for heart cuts.

The vibrant radiant-cut diamond is a cross between the cushion and princess cuts, and looks great in jewellery set with either round or square-cut diamonds. The square, cropped corner shape has a complete brilliant-cut facet pattern applied to the crown and pavilion. Blue diamonds seem to show off their colour particularly well with a radiant cut.

The princess cut diamond is one of the most popular fancy cuts for engagement rings. Traditionally a square cut, princess-cut diamonds are flexible and work well in nearly any diamond ring style. Betzalel Ambar and Israel Itzkowitz created the princess cut in 1980.

Another patented Tiffany cut is the Tiffany Novo. Inspired by a famous 128.4ct Tiffany diamond, this stunning yellow diamond was set by Jean Schlumberger inside a clip crafted of twisted strips of diamonds, platinum and gold. The Tiffany Novo cushion cut has the same number of facets as a round brilliant cut to maximise the brilliance.

David Yurman’s signature cut makes full use of a diamond’s brilliance and colour. It took two years of combining advanced technology with traditional cutting expertise to create a modified cushion cut, perfectly proportioned “hearts and arrows” diamond, which is considered to have the highest refractory brilliance of any cushion-cut diamond in the world.

Renowned designer John Calleija’s glacier cut is another interpretation of the cushion cut. Under the tutelage of a maestro stonecutter, this cut allows maximum brilliance to radiate from the stone, while softening the dimensions of the traditionally angular cushion cut.

Ashoka cut diamonds have 62 displayed facets and rounded corners as compared to 57 facets in a regular round cut. A famous 3rd century, Indian, 41.3 carat, flawless diamond inspired the Ashoka cut, patented in 2000 by US jeweller William Goldberg. This stunning elongated diamond cut has rounded corners and a rectangular shape giving it a vintage feel. Boodles is the only stockist of Ashoka cut diamonds in the UK.

The patented Louis Vuitton diamond cuts are based on the brand’s iconic LV monogram. These star and flower diamond logos were cut at Lili Diamonds in Tel Aviv, Israel, and have between 61 and 77 facets.

Garrard master cutter Gabi Tolkowsky created the stunning eternal cut, which has been described as “a diamond for the millennium and beyond”. This diamond cut has a unique petal design that appears in its centre and intensifies the quality of light reflected from the stone, like the opening of a flower. The cut is available from 0.40 to 50ct and comes with 81 facets.

Tolkowsky also assisted with the Asprey cut, a contemporary reinterpretation of the cushion cut that played a significant role in Asprey’s re-launch in 2004. This modern take on the traditional diamond cut incorporates the letter A on the crown with 61 facets. The unique, slightly softened square shape of the Asprey can only be cut by hand.

The hearts and arrows diamond cut is the result of Backes & Strauss having more than 200 years’ experience in the diamond-cutting business. This perfectly symmetrical stone sacrifices nearly 50 percent of the rough diamond to carve out 57 facets that create a “hearts and arrows” effect. A pattern of eight arrowheads and eight heart shapes can be seen when viewed with a special instrument called the Hearts and Arrows Viewer.

US-based jeweller Bez Ambar made his name with the princess cut in 1980, but it is his patented Blaze and Divine diamond cuts that mark a dramatic departure from traditional diamond cutting. After spending decades in the study of precious gemstones, Ambar concluded diamond clarity – that quality of how a diamond bends and refracts light to display its inner fire – is its most singular trait. To highlight the diamond’s ability to break the light, Ambar designed and patented the Blaze cut. This minimalistic cut uses 13 main facets to maximise bursts of colours radiating from the diamond.

His latest innovation, the Divine cut, has been heralded as a truly spectacular cut that shows an amazing range of spectral colours. Because of the way these diamonds are cut, they are as much as two grades whiter than traditionally cut diamonds, and they show a brilliant fire. One of Ambar’s exquisite creations “The Ring of Fire” combines the Divine-cut and Blaze-cut diamonds for what has been called “the ultimate halo ring”.

The oldest cut diamonds we know date back to the 13th century with Medieval Islamic jewellery, which uses a simple table cut. A table cut includes all cuts that use a table facet. Round brilliant and princess cuts fall under this category. However, there are a staggering number of variations on traditional cuts and new, patented cuts are introduced regularly. Each of the different diamond cuts is carefully engineered to bring out the best in diamond clarity and fire.