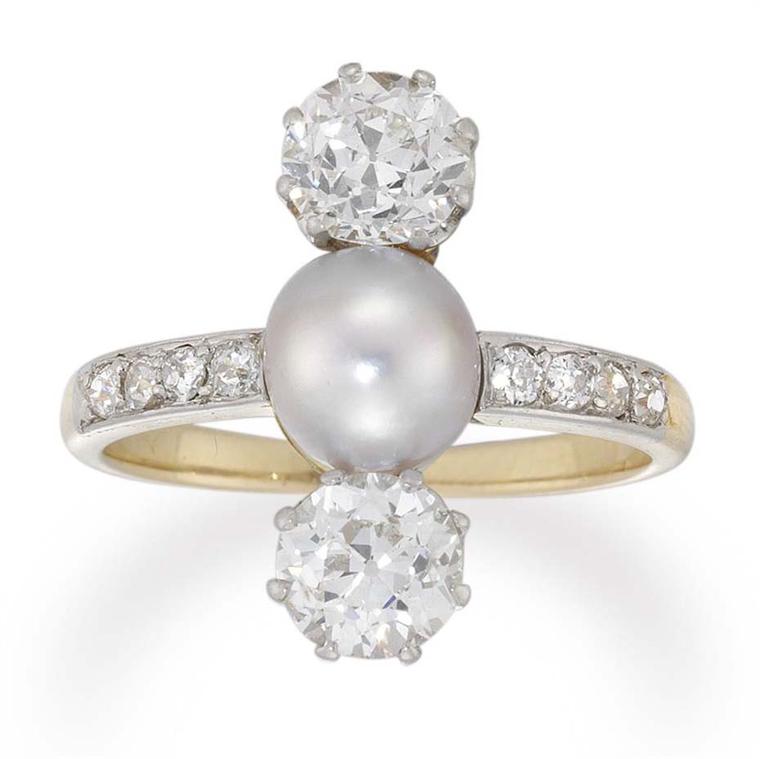 The Edwardian era is known for its lavishness, so it should come as no surprise that vintage engagement rings from this period are some of the most opulent and feminine designs around.

Edwardian engagement rings date back to 1901-1910 when King Edward VII and his elegant wife, Queen Alexandra, were the leaders of the fashionable Belle Époque elite. Usually made from platinum or white gold, Edwardian engagement rings exude romance and often feature elaborate lace or filigree designs, millegrain edges or scrollwork. The introduction of the oxy-acetylene torch made working with platinum much easier and enabled jewellers to create sculptural pieces where the centre stone could be flanked by romantic motifs such as bows, flowers or birds.

In terms of stones, rose-cut or old-cut diamonds were the most prominent gems of the era, often combined with pearls on a platinum band to achieve the fashionable “white on white” effect. While yellow gold Edwardian rings are less common, sometimes rings were crafted from a combination of gold and platinum. Some Edwardian engagement rings also featured coloured gemstones, typically sapphires, moonstones, or pale creamy opals, usually teemed with white diamonds.

Antique Edwardian engagement rings are not easy to come by or cheap, with prices often running into five-figure sums. Bentley & Skinner has a large selection of vintage engagement rings, including some that are typical of the Edwardian era, such as these distinctive diamond and pearl rings dating back to the early 20th century. The vintage and antique jeweller also has a number of rings with coloured gemstones, including an Edwardian opal and diamond cluster ring featuring a diamond surround with millegrain beading.

The Berganza pearl and diamond crossover ring is also a stunning example of an Edwardian engagement ring, while a similar style in 18ct yellow gold and platinum, set with one pink and one yellow sapphire, is perfect if you want a more colourful jewel. Another sapphire and diamond ring from Berganza, dating back to 1910, features a 2.30ct cushion-cut sapphire encircled by old-cut diamonds in a millegrain setting.

The Edwardian engagement ring from Doyle & Doyle New York perfectly demonstrates the all-white look that was so fashionable at the time. It is testament to the skill and craftsmanship of Edwardian jewellers that these vintage designs are so sought after today. For a ring that radiates pure romance and promises to stand the test of time, you can’t go wrong with an Edwardian engagement ring.