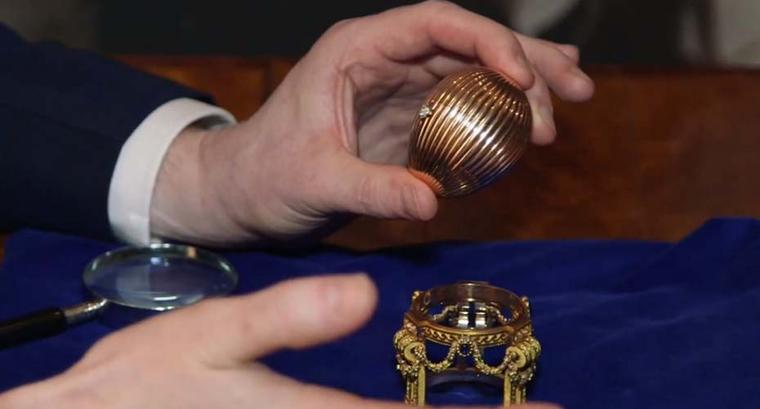 I went to the Court Jewellers Wartski in London to talk to Kieran McCarthy about the Fabergé Third Imperial Easter Egg. Last seen in public 122 years ago, it is one of the great missing treasures of Imperial Russia that experts such as McCarthy have spent a lifetime looking for.

This is the third Easter Egg of the 50 so-called ‘Imperial Eggs’ that Carl Fabergé made for the royal family and it was given by Alexander III Emperor to his wife Empress Maria Feodorovna as both a romantic and Christian symbol on Easter Day 1887.

The life-size 8.2 cm high golden hen’s Egg sits on a blossom-festooned stand, which rests on carved lion’s feet. Inside is a Vacheron Constantin  watch that worked perfectly the very first time McCarthy wound it.

Along with many other jewels and valuable objects, the Third Imperial Easter Egg was confiscated by the Bolsheviks following the 1917 revolution. How it then found its way to an antique jewellery specialist in Mayfair via the Mid-West of America is a story full of intrigue. And like a true thriller, this valuable and historical object narrowly escaped being melted down.

Its former American owner, who bought the Egg as scrap metal for $14,000, had trouble selling it on as he had overestimated its worth. Desperate to recoup his investment, by chance he did an Internet search for ‘Egg’ and ‘Vacheron Constantin’. The search brought up an article in The Telegraph about the famous Third Imperial Easter Egg, in which Fabergé expert Kieran McCarthy of Wartski was quoted.

Kieran McCarthy was contacted by the owner and, on seeing the photographs of the Egg, immediately identified it as the missing Fabergé Third Imperial Egg. Since then, Wartski has sold the Egg for £20 million.

Now that the Third Imperial Easter Egg has been found, the hunt is still on for two missing Eggs: the 1888 Cherub Egg with Chariot and the 1889 Necessaire Egg. But before this Fabergé Egg disappears into the private collection of the anonymous new owner it will be on display at Wartski’s from the 14th to 17thApril. It is a once-in-a-lifetime chance to see this treasure that almost got away.

The Fabergé Third Imperial Easter Egg will be on display from 11am to 5pm at Wartski, 14 Grafton Street, London W1S 4DE. Entrance is free, but expect queues.