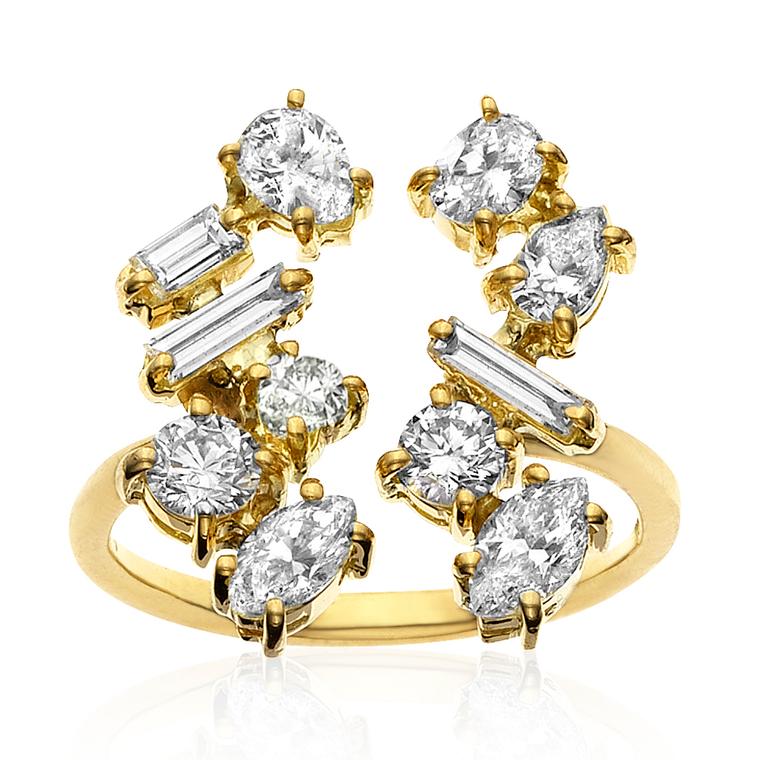 While they might not be the most sparkling of cuts, long and lean baguette diamonds are bringing a sense of understated cool to diamond jewellery.

Traditionally, baguette diamonds have been used as accents to other cuts because the brilliance of these stones, which usually have 24 facets arranged in a step formation, is not as fierce as other diamond cuts. But what these stones do have, as well as an attractive lustre, is a keen sense of geometry that is winning them starring roles in modern designs.

Suzanne Kalan is one designer who has fallen under the spell of baguette diamonds and her Fireworks collection is a celebration of this under-used diamond cut. The American jeweller has created cocktail rings made from patchworks of baguettes placed at different angles, and eternity bands and bracelets that forgo the traditional channel setting of baguettes in favour of a jaunty ladder of stones of different sizes set at various angles. One of her most wearable designs, currently on sale at Net-a-Porter, is a pair of diamond earrings with a small cluster of baguettes that gently ascend the lobe.

Baguette diamonds can also make a great statement when placed with other cuts, as their striking lack of soft curves is a direct contrast to more popular round brilliants, marquise and pear shapes. This is a theme that both Kimberly McDonald and Chanel have explored. The former sets baguettes amidst softer diamond cuts to create a modern ring with two strips of diamonds that float between the fingers, while Chanel’s Ruban Prestige bracelet from its Les Intemporels collection livened up round diamond pavé with a scattering of baguettes, which look almost as though they have been placed on top of the other stones, rather than nestled in alongside.

Emerald-cut diamonds, though usually not as narrow as baguettes, can also provide that rectangular look, and might be a better option should you want to up the carat size, as there are more on the market to choose from. It is important to know that both types of diamonds do not offer as much fire as round brilliants, and are not as good as hiding inclusions or poor colour. While this shouldn’t matter too much for designs with smaller diamonds, for larger designs – such as the brand new David Morris emerald-cut diamond ring, with nearly 4.00cts of baguette- and emerald-cut white diamonds stacked at the sides – it is advisable to opt for the best quality diamonds that your budget allows.