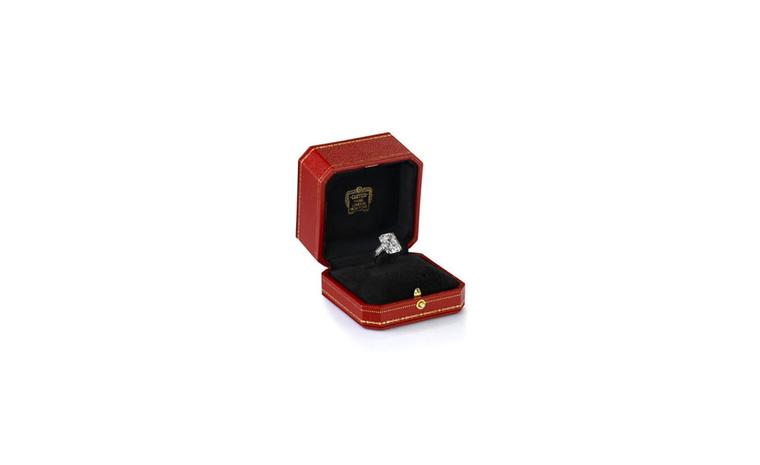 Grace Kelly’s Cartier diamond engagement ring says a lot about the Princess’s style and how she brought a  touch of Hollywood glamor to European sophistication. This year, the Cartier creations owned by Princess Grace of Monaco made scintillating headlines. These items of jewellery were on display from 28th March to 31st May at the National Museum of Tokyo as part of the “Story of … – Memories of Cartier Creations” exhibition designed by the Japanese designer Tokujin Yoshioka. In addition, one of Princess Grace’s favourite items – a diamond-studded poodle brooch – was on display in the Fifth Avenue boutique in New York in April, when Cartier celebrated its 100th year in the United States.The occasion is a reminder of the historical links that exist between Cartier and the Principality of Monaco. They date back to November 1920, when Prince Albert 1st issued Cartier’s first royal warrant as an official supplier. Grace Kelly, a ring for a legendary engagement Grace Kelly was a modern yet timelessly classical princess, who became a style icon over time. Her simplicity and purity were reflected in the genuine, superb nature of her personal preferences and taste. An American actress discovered by Alfred Hitchcock, she was a symbol of refined perfection that found a natural echo in Cartier jewellery. This relationship, rooted in elegance and prestige, took hold in January 1956 on the day that Prince Rainier III sealed their engagement with a platinum Cartier ring bearing an emerald-cut diamond of 10.47 carats. Wedding rings and official ceremonial jewellery A truly exceptional diamond flanked by two baguette-cut diamonds and mounted in platinum, an enchanting blend of sparkle and sobriety whose delicacy and purity of design reflected the actress’s firm belief that, when it comes to style, less is more. The ring was an important personal link and she made it a natural complement to her personality, to the point of insisting on wearing it on the set of High Society, the Hollywood film she made that year with Bing Crosby and Frank Sinatra, directed by Charles Walters. At the time of her wedding in April 1956, Princess Grace appeared in official photographs wearing a Cartier platinum tiara set with round and baguette-cut diamonds, enhanced by three floral motifs each blooming with a ruby cabochon: a delicate lattice of jewellery whose three detachable motifs formed a group of brooches that the Princess would wear throughout her life.  On the same day, she wore a dazzling necklace composed of three strands of alternating round and baguette-cut diamonds for a total weight of 58 carats. The femininity of this piece, together with the impeccable purity of its modern-day style, made it the true hallmark of a princess who was in complete harmony with the spirit of Cartier. Princess Grace also later adopted Cartier’s famous animal collection.