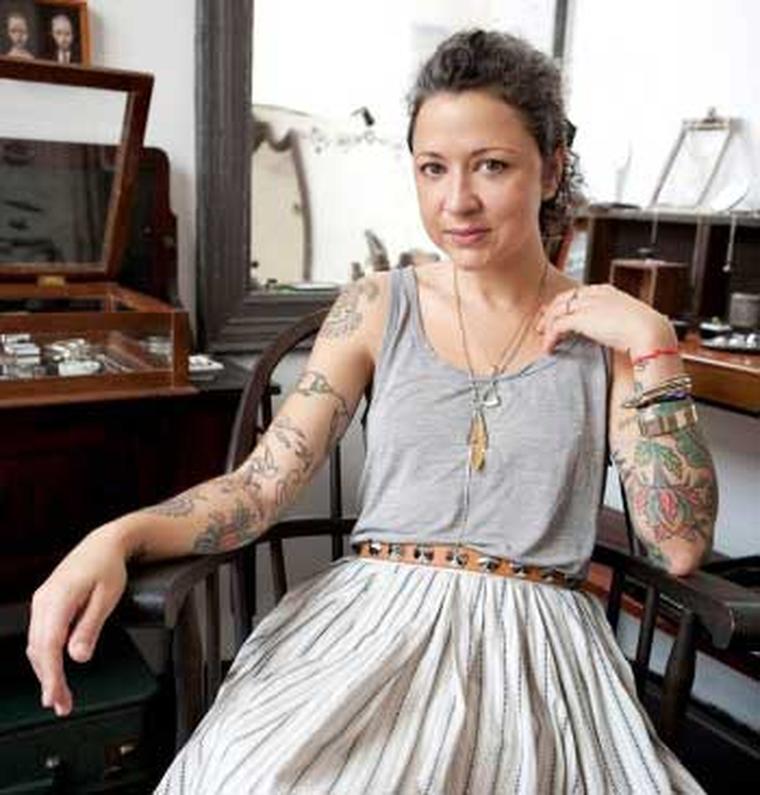 I’m just about numb from reading descriptions of jewellery designs and other forms of art that use opposite attributes, for example “classic with a modern twist”, so the items sound appealing to all audiences. But here I am doing the same when I describe the jewellery of Anna Sheffield as delicate yet edgy.

When I use the word edgy I mean it both figuratively and literally. Some of her pieces have actual edges, as well as bends and curves and other shapes that Anna often combines with Art Deco and Victorian themes. But one shouldn’t expect anything less from the petite, well-spoken Anna, who often wears feminine lace clothes that reveal a body largely covered in tattoos.

Nowhere is this mix of attributes more noticeable than in Anna’s range of bridal jewellery, which she launched in 2011. “How amazing it would be if I could present fine jewellery in a way that’s never been done before,” she says. And this is precisely what she has achieved with her engagement rings and wedding bands – the most traditional of all jewels sold in the US – reimagining the category by combining colours, shapes and past periods.

A black diamond is used as a centre stone on a ring with a row of white diamonds in a “basket shape”, one of her signature design details. Two rose-cut pink tourmalines flank a princess-cut pink tourmaline. Quartz, moonstone, labradorite are also shaped in traditional emerald cuts.

In one ring Anna uses rose gold in a hexagon shape as a centrepiece, as if it’s a gemstone, with a diamond hidden behind the metal that only the wearer knows is there. Even a marquise cut, rarely seen in bridal jewellery anymore, makes an appearance in a double-band harness ring. “It’s such an unappreciated cut,” says Anna. “I think it’s a beautiful shape.

Anna’s customers were initially creative types who were attracted to her fresh attitude to bridal jewellery. However, thanks to the Internet and Skype, her buyers now come from all over the world. “We see a lot of people who don’t necessarily want a diamond centre or are not as fixed on having a diamond ring,” she says.

Engagement jewellery is a personal statement, but Sheffield’s pieces are also a statement of her tastes – from her upbringing on the New Mexico-Colorado border to her experiences in San Francisco and now New York, where she has her atelier and retail store.

“I want there to be a sweetness and an edginess to everything I make,” she says. “I love art. I love architecture. I love the Victorian and Art Deco eras. I feel these are things that my customers identify with.”