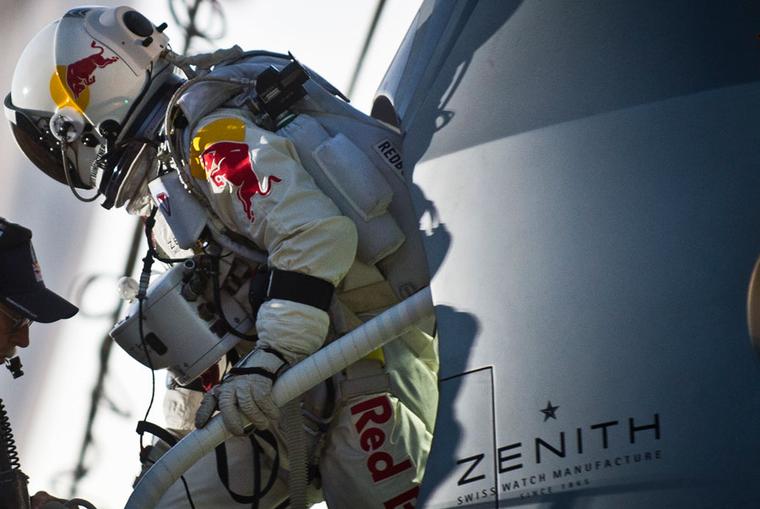 Onlookers the world over drew a collective breath as Felix Baumgartner stepped off the edge of his stratospheric balloon capsule and into the history books. From a height of 120,000ft, in near space conditions, he not only went into the highest free-fall ever but also became the first human being to break the sound barrier unaided by a vehicle. When he reached speeds of Mach 1.24 (833.9 miles per hour), he wasn’t completely alone. An ambassador for watch brand Zenith, Baumgartner was also wearing his all-new El Primero Stratos Flyback Striking 10th chronograph. “This project is all about uniqueness, manpower and precision, and my Zenith watch perfectly matched the mission,” said Baumgarnter.

As official timekeeper for the jump, it was fitting that a Zenith watch became the first timepiece to break the sound barrier. After five years of preparation, it almost went wrong in the crucial final moments. “It was an incredible up and down today, just like it’s been with the whole project,” a celebratory Baumgartner said. “The exit was perfect, but then I started spinning slowly. I thought I’d just spin a few times and that would be that, but then I started to speed up. It was really brutal at times. I thought for a few seconds that I’d lose consciousness. I didn’t feel a sonic boom because I was so busy just trying to stabilise myself.”

With a well-deserved reception and the knowledge that he is still in one piece, Baumgartner can count himself as a world-record breaker and the original man who fell to earth.