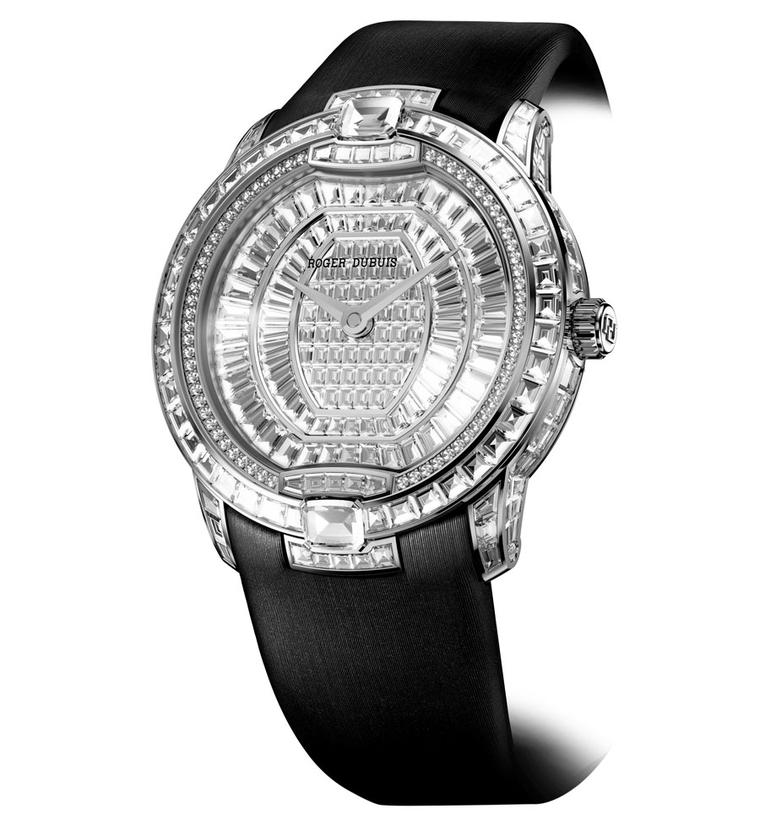 Roger Dubuis has made 2013 the year of the Excalibur, with a new collection of watches embodying ‘the world of the warrior’. Originally launched in 2005, the Excalibur line takes its inspiration from the Arthurian legend, with the new timepieces emphasising the ideals of chivalry, strength and nobility.

Roger Dubuis is the perfect fit for realising such noble values. Founded in 1995, Dubuis is one of the few Swiss watchmakers to bear the Seal of Geneva, with all pieces designed, handcrafted and produced in-house in the Swiss city.

First seen at this year’s Salon International de la Haute Horlogerie, the standout piece was the Excalibur Round Table in pink gold. Every hour features a sculpted pink-gold figure of the 12 knights, sitting atop a dial that recreates the Winchester round table in “Grand Feu” enamel. The original round table hangs in Winchester Castle, bearing the names of the 12 knights and the same green and white pattern. Each of the miniature gold knights has been carefully carved and everyone is different. Each holds his helmet and the attention to detail is impressive. To fully appreciate this work you need a magnifying glass to inspect these little carvings.  The reverse of the Excalibur Round Table also features a seal inscribed with each of the knights’ names.

The Roger Dubuis Excalibur Quatuor is another highlight from the brand. This is the first watch to have a case made out of silicon – a material that is stronger than titanium but a fraction of the weight. Also available in weightier pink gold, the Quatuor’s skeleton design displays the calibre RD101, with not one but four sprung balances in a single movement, another first for Roger Dubuis. The four balances, like a tourbillon, counter the effects of gravity and so enhance the precision of the watch. The price? A mere 1,000,000 Swiss Francs.

If the new collection aims to show the nobility and strength of the Excalibur legend, then few of the pieces embody it better than the Excalibur Double Skeleton Tourbillon. On display is the RD01SQ movement with its futuristic yet extravagant black and gold finishings. To truly embody the spirit of chivalry, however, Roger Dubuis had to come up with a very special ladies’ watch. Fully pavéd with 304 baguette-cut diamonds totalling 13.61ct in an invisible setting, the Excalibur Velvet high jewellery watch is the knight in shining armour of the 2013 collection.