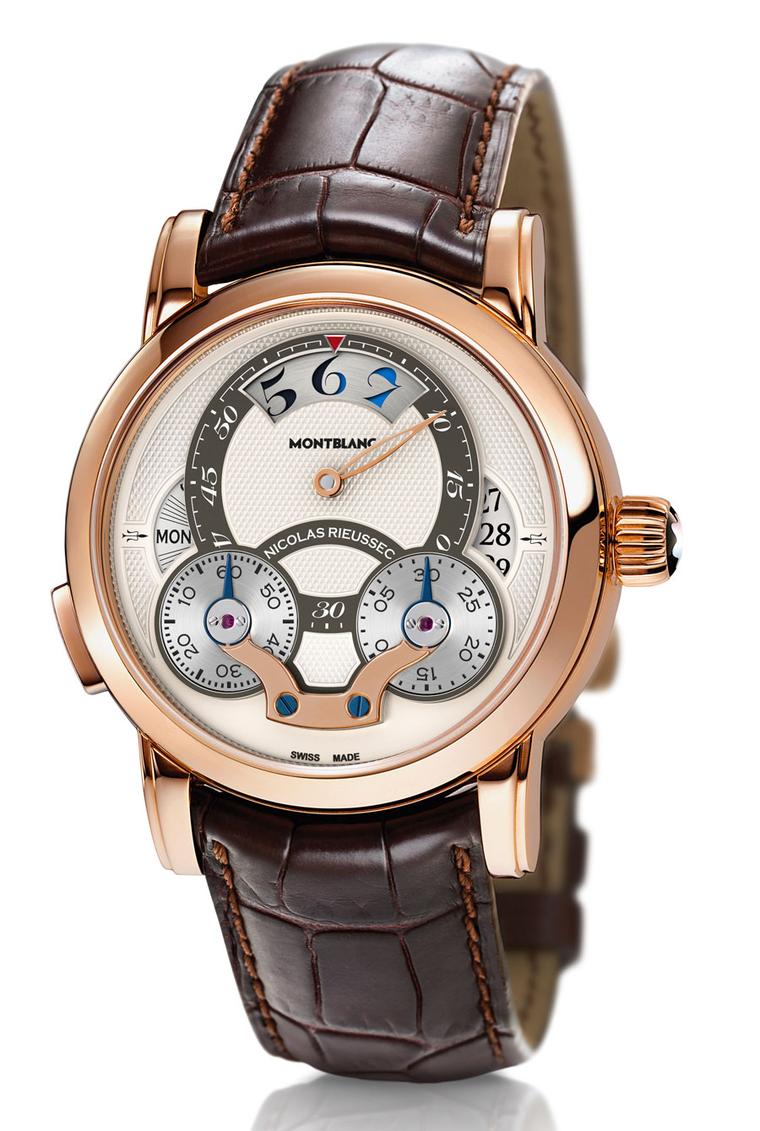 Described as “a chronograph for day and night”, the Montblanc Nicolas Rieussec Rising Hours is named for the father of the chronograph who in 1821 created an inking chronograph to time horse races, this new model does away with the hour hand and replaces it with a disc. The hour numbers are cut out and day or night is indicated by the white or blue background. The single-pusher chronograph tallies seconds and minutes on the two rotating discs that dominate the dial. This red gold version is powered by the self-winding Montblanc Manufacture Calibre MB R220.

Inspired by the ‘Rose de Monaco’, a pink bloom created in 1956 to commemorate Grace Kelly’s marriage to Prince Rainier of Monaco, the Princess Grace of Monaco collection takes its cues from the shapes of rose petals and the flower itself. Launched at the SIHH, the white-gold high jewellery watch, called ‘Pétales de Roses’, is a one-off: a unique piece that will never be repeated. Most distinctive is the variety of diamond cuts used to set the entire watch, from dial to case to bracelet. The bezel shimmers with a spiral of 44 graduated baguette-cut diamonds that total just over 4ct, further enhanced by the fire of 130 brilliant-cut diamonds set into the inner rim of the bezel, also known as the flange. In return for using Grace Kelly as the inspiration for a collection of watches – as well as jewels and pens – named ‘A Tribute to Grace’, Montblanc supports the Princess Grace Foundation in the USA, which gives emerging young artists a helping hand.

The TimeWalker TwinFly chronograph has an aesthetic purity that belies its complicated interior. A very masculine watch without the need to shout, the TwinFly combines a chronograph with a practical indicator for a second timezone.

Finally, what would SIHH be without a tourbillon or two? Montblanc certainly had that covered with the ExoTourbillon Chronographe from its Collection Villeret 1858. This time, though, the watch was presented with a brand-new face and has the honour of being the first in the collection to combine both a chronograph and a tourbillon. To mark this new innovation, Montblanc will release the ExoTourbillon in a strictly limited edition of eight timepieces in white gold and eight in red gold.