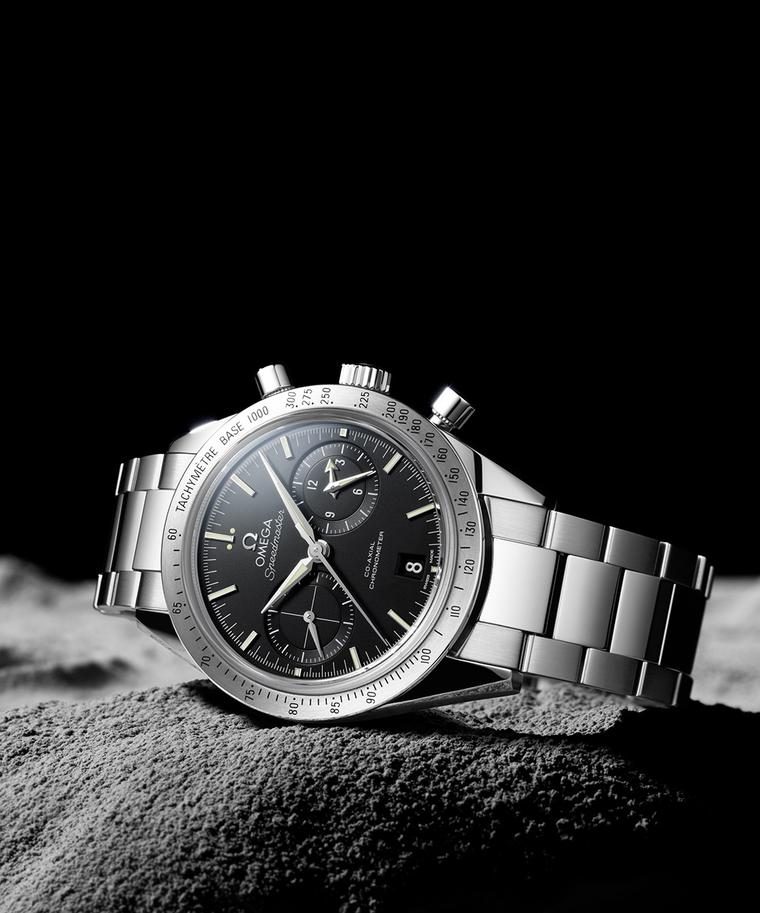 It was the first watch to land on the Moon and its popularity has not lost an inch of its gravitational pull since it was spotted on Buzz Aldrin’s wrist in July 1969.(Read more here) This year OMEGA’s legendary Speedmaster Moonwatch orbits the “Dark Side of the Moon” in a sleek black ceramic capsule.

True to its origins, the black Moonwatch touts its hallmark tachymeter scale, rejuvenated in matt chromium nitride, a compound known for its resilience to corrosion. A virile chronograph, the two blackened sub-dials, the red tipped central seconds hand and rounded pushers have all been redesigned for intuitive reading and smooth functioning. With its black ceramic 44.25mm case, the dark dial is offset with white gold indices and hands, as well as a good size date window at 6 o’clock. Powering the functions and guaranteed for four years is the OMEGA Co-Axial calibre 9300 movement with silicon balance spring (hence the Si14 engraving on the caseback). A rugged black Cordura® fabric strap – an allusion to the Velcro straps that astronauts used to secure their watches with on top of their bulky spacesuits – completes the dark look.

A decade before Apollo 11 landed on the Moon, OMEGA’s Speedmaster ’57 Co-Axial Chronograph was setting the standard for small seconds’ timings in a case that has withstood six lunar landings and the changing fashions of the last six decades. Unlike its 1957 predecessor, this year’s Speedmaster has reduced the original three chronograph counters to two by combining the 12 hour and 60 minute dials in the same counter at 3 o’clock. Presented in a 41.5mm case in a choice of metals, ranging from luxury red or yellow gold and lightweight titanium to two-tone red gold and stainless steel and classic stainless steel, with an integrated bracelet for die-hard fans of the archetype.

Still in orbit, Constellation is the new star chosen by OMEGA to show off its proprietary new 18ct rose gold alloy known as Sedna™gold.  Inspired by the reddest orbiting object in our solar system, Sedna’s rich, warm rose colour is obtained by a top-secret blend of gold, copper and palladium. Copper is added to warm up the gold and a dose of palladium to ensure the long-lasting lustre of the case. A veteran line since 1952, all the Constellation genetic markers are on display, with Roman numerals on the bezel, a silvery pie-pan dial with gold arrow headed indices and, naturally, the famous ‘claws’ positioned at 3 and 9 o’clock, which guard the bezel.

Not just a pretty face, Constellation Sedna is equipped with OMEGA’s much acclaimed automatic Co-Axial calibre 8501, with its oscillating mass and red gold balance bridge visible though a sapphire crystal caseback. Limited to 1,952 pieces, the 38mm Constellation Sedna has COSC certification, is waterproof to 100m and features a date window at 3 o’clock.

Read about Omega in our iconic watches for men