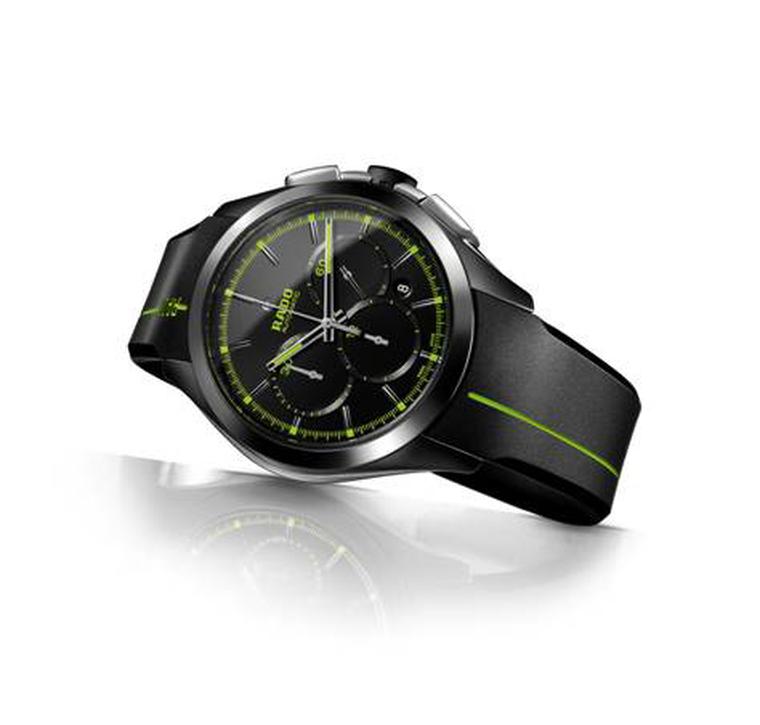 Great Britain has been waiting 77 years for a men’s champion at Wimbledon, and yesterday tennis fans throughout the United Kingdom got the victory they have been longing for when Andy Murray powered to victory in a straight sets win against Novak Djokovic. On one of the hottest days of the year so far, Murray put on a bravado performance in front of an ecstatic home crowd that included Victoria Beckham, Bradley Cooper and Gerard Butler.

Changing out of his sweatbands and into his trusty Rado HyperChrome automatic chronograph after the match, the world watched as he lifted the famous gold trophy, giving viewers a close-up of his preferred timepiece. Unlike his rival Rafael Nadal who wears a £424,000 Richard Mille watch, Murray shows a more modest taste in timepieces. The Rado HyperChrome retails for £3,150.

Murray is brand ambassador of this Swiss watch house, which is part of the Swatch Group. Rado is famous for its tough, scratch-resistant, ultra-light watches using materials such as high-tech ceramic and metals, making it a logical choice for a sportsman such as Murray. The HyperChrome Court range is made out of lightweight black scratch-resistant, high-tech ceramic with glow in the dark Super-LumiNova dial details. Murray wears the version with a green flash on the cool rubber strap and dial though a two other versions in orange or blue are also available.

Rafael Nadal on the other hand, who does actually wear his watch on court, prefers the most sophisticated in watchmaking and always wears his Richard Mille RM027 on court made specifically for the Spanish tennis ace who has already out-performed Bjorn Borg’s six titles. “Richard Mille decided to invest in this sport in 2010 to meet the new technical challenges it offered and to test new solutions in the world of Haute Horlogerie,” says the  press release from Richard Mille.

“Following in the footsteps of Pablo Mac Donough in polo, Felipe Massa, Jules Bianchi, Martin Brundle and his son Alex, Romain Dumas, Charles Leclerc and Adrian Tambay in motor racing and Bubba Watson in golf, Rafael Nadal wears the RM 027 Tourbillon during his tennis tournaments,” it continues. “This timepiece was created specifically for him to put its technical excellence, performance and shock-resistance to the test. Since 2010, the RM 027 has unflinchingly resisted Rafa’s unrelenting game while leaving him free to move and is the lightest mechanical watch in the world, weighing no more than 18g, including the strap.”

The first thing to point out, is that this watch is not only a mechanical watch, which means it is not powered by a battery but by the movement of the wrist. It also incorporates a very sophisticated tourbillon escapement, a device that was invented at the end of the 19th century to improve timekeeping in pocket watches and seems out of place in the high-impact sport of tennis.

Unlike a traditional watch, Richard Mille has researched highly resistant, lightweight materials such as LITAL®, which is used for the moving parts. The casing is made from a carbon-based composite and the baseplate from titanium. Months of experimenting and countless tests on the arm of Rafael Nadal, who fully participated in designing and developing the model, were necessary to refine and perfect this ultra-technical timepiece, which can withstand the most violent of blows.”It is an honour that someone like Richard has chosen me as one of his ambassadors,” says Nadal. “I know that he has worked very hard to be able to create this very special watch. I am sure it will be a special and successful partnership.”