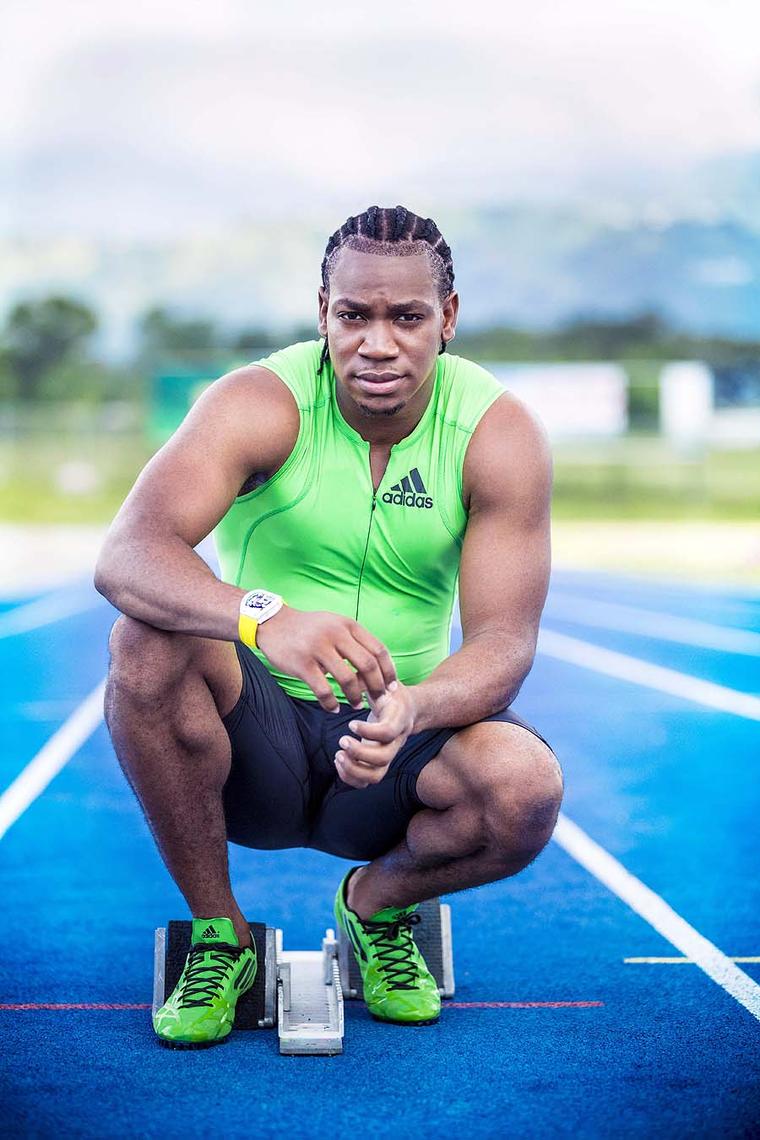 Richard Mille, the Swiss watch manufacturer known for producing high-performance, ultra-light watches of the highest quality, is known, simply, as the F1 of the watch world – its watches are faster, lighter and stronger than anyone else’s.

The latest sports person to put the Richard Mille technology to the test is Yohan Blake, the Jamaican sprinter who holds the world record for the 100 metre sprint and a now-familiar face thanks to his presence at the 2012 London Olympics, where he raced alongside compatriot Usain Bolt. The 23-year-old Blake is affectionately known as “The Beast” for his style of running, in which he holds his hands like claws. He is the third fastest sprinter in the world, with a record of 9.69 seconds for the 100 metres.

Now you wouldn’t normally expect to see a sprinter wearing a watch, let alone a £438,000 one with a tourbillon, one of the most complex feats of watchmaking, which increases its precision by compensating for the effects of gravity. By strapping a tourbillon onto the wrist of one of the fastest sprinters in the world, Richard Mille was able to test the resilience of this sophisticated mechanism under extreme conditions. The case is moulded to Blake’s wrist, a detail he appreciates as comfort is paramount when focussing on crossing the finishing line.

Dressed in a sharp navy blue suit, Blake arrived at Richard Mille’s boutique in Harrods to usher in the first RM 059-01, the very same watch that he wears on his wrist. While Blake has been wearing a prototype, the watch that arrived at Harrods yesterday was stamped with the serial number 01 and will be one of only 50 pieces.

You can’t miss the RM 059-01 because it is bright green with yellow details, a nod to Blake’s patriotism for Jamaica. The case is made out of a carbon compound injected with nano tubes and is the latest in highly resistant materials. Four ‘claws’, which refer to Blake’s nickname, also serve the purpose of a bridge for the mechanism. Blake told me that he was surprised when he saw the first design with the claws across the dial and was very pleased with the idea.

The watch Blake wore at the 2012 Olympics, in which he won silver medals for the 100m and 200m and a gold for the 4 x 100m relay, is being donated to the Only Watch charity auction in Monaco, which will take place on 28 September.

To put Richard Mille into context, the ‘machines for the wrist’ that this house produces are so avant-garde and daring in their relentless application of new technologies that they are simply in a category of their own. So while one of Richard Mille’s carbon fibre watches may weigh less than a pencil, they are packed with research and space age materials, making them some of the most expensive watches you are likely to see.

Other notable Richard Mille wearers include Rafael Nadal, Felipe Massa and golfer Bubba Watson, so it safe to say that Yohan Blake is in very good company. As will the new owner of the first RM 059-01 to come onto the market. I hear that it was pre-sold and its owner was coming to collect it in person. Blake told me that as a surprise, he was personally going to present the watch to its new owner. Now that would be a very pleasant surprise indeed.