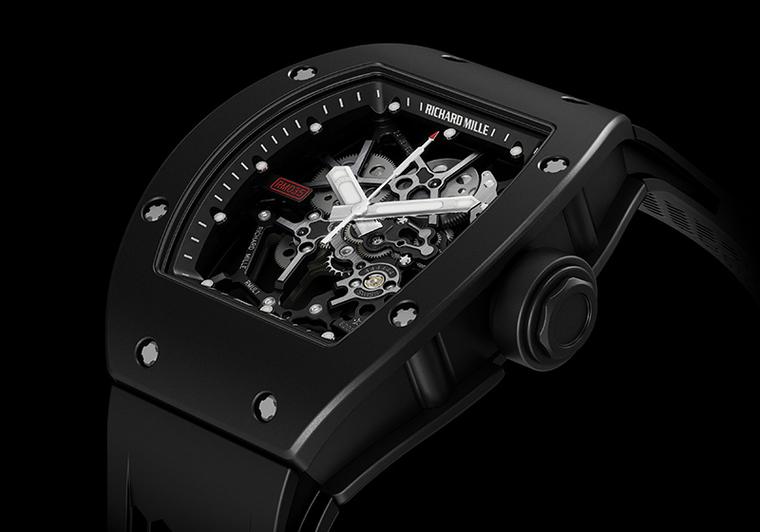 With Wimbledon underway once again all eyes were on Rafael Nadal and I was looking at his wrist. Unfortunately the Spanish tennis player was knocked out in the opening round at Wimbledon in a shock defeat. But I did have enough time to check, that yes, he was wearing his Richard Mille RM 027 Tourbillon. Maybe not so lucky this year, but I am sure that while Nadal limped off court with a painful knee, his watch exited unperturbed.

Much was written about Nadal’s Richard Mille RM 027 Tourbillon during Wimbledon 2012, particularly after its theft from his Paris hotel room while he was sleeping, the night of his Roland Garros victory. It gave journalists a headline-grabbing story, and alongside the many stories came plenty of misconceptions.

My favourite mistake was the story that Nadal’s watch was ‘a jewel encrusted gadget’. “How else,” the journalist must have thought, “could a watch be so expensive?” It was nothing to do with jewels, of course, but one very complex watch, more of which below. The other interesting and persistent mistake was the value of the watch. Most papers reported the value of the RM 027 Tourbillon at ‘an eye-watering £240,000’. The watch is, in fact, worth £424,000, were you able to buy one – all 50 of this limited-edition timepiece have sold out. And to boot, most papers published a picture of the RM 035, the second generation of the Nadal watch.

So let’s put straight some of the facts about the Richard Mille RM 027 Tourbillon, which  was made specifically for the Spanish tennis ace who, at 23, has already out-performed Bjorn Borg’s six titles. “Richard Mille decided to invest in this sport in 2010 to meet the new technical challenges it offered and to test new solutions in the world of Haute Horlogerie,” says the  press release for the watch.

“Following in the footsteps of Pablo Mac Donough in polo, Felipe Massa, Jules Bianchi, Martin Brundle and his son Alex, Romain Dumas, Charles Leclerc and Adrian Tambay in motor racing and Bubba Watson in golf, Rafael Nadal wears the RM 027 Tourbillon during his tennis tournaments,” it continues. “This timepiece was created specifically for him to put its technical excellence, performance and shock-resistance to the test. Since 2010, the RM 027 has unflinchingly resisted Rafa’s unrelenting game while leaving him free to move and is the lightest mechanical watch in the world, weighing no more than 18g, including the strap.”

The first thing to point out, which may seem screamingly obvious to horolophiles, is that this watch is not only a mechanical watch, which means it is not powered by a battery but by the movement of the wrist. It also incorporates a very sophisticated tourbillon escapement, a device that was invented at the end of the 19th century to improve timekeeping in pocket watches and seems out of place in the high-impact sport of tennis.

Though to the uninitiated Nadal’s watch may look like a black plastic Swatch, it is in fact a highly sophisticated and expensive mechanical watch. Not only is it rare to see a tennis player wearing a watch on court, it is even more unusual that it is a highly complicated tourbillon, more often seen in the sedate atmosphere of a board room.

It is the turbo, fuel-injection, 16-cylinder, all-bells-and-whistles engine of the watch world, and Rafa seems remarkably fond it of it. Is Nadal really keeping his eye on the time or has his ultra-light Richard Mille watch become something of a good luck charm? I assume, that like most men, Rafa is in awe of his micro-mechanical marvel, the workings of which are visible through the dial. The fact that this watch, like all Richard Milles, is based on the pared-down aesthetics of Formula 1 racing can only add to its appeal and is about as close to wearing a F1 engine on your wrist as it gets.

And astonishingly, it weighs only 18g, strap included, making the RM 027 Tourbillon the lightest mechanical watch ever designed and the first watch to be worn by a player in a Grand Slam. Just as well that it is extremely shock-resistant and comfortable on the wrist. While most brands would suggest you leave your delicate tourbillon watch in the changing room, Richard Mille has taken great delight in putting a high-end watch on the wrist of a top player in top-level tennis matches.

Unlike a traditional watch, Richard Mille has researched highly resistant, lightweight materials such as LITAL®, which is used for the moving parts. The casing is made from a carbon-based composite and the baseplate from titanium. Months of experimenting and countless tests on the arm of Rafael Nadal, who fully participated in designing and developing the model, were necessary to refine and perfect this ultra-technical timepiece, which can withstand the most violent of blows.”It is an honour that someone like Richard has chosen me as one of his ambassadors,” says Nadal. “I know that he has worked very hard to be able to create this very special watch. I am sure it will be a special and successful partnership.”

As the RM 027 sold out, in 2011 Richard Mille launched a manual-winding edition with the same look and feel of Nadal’s tourbillon. The watch is called the Richard Mille RM 035 Rafael Nadal, Chronofiable® Certified, and it sells for a more reasonable £68,000. Although it bears Nadal’s name, this is not the watch that the Spaniard wears on court as he prefers to stick to his lucky watch, which must have some kind of special powers because it was found again shortly after it was stolen and reunited with its owner.