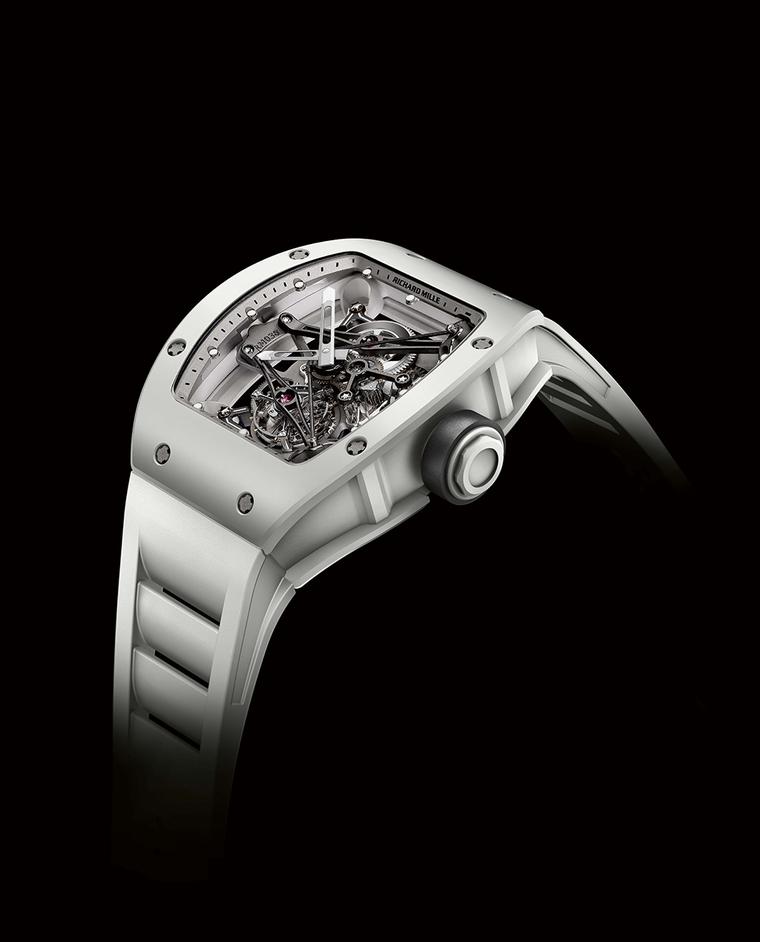 Richard Mille, the Swiss watchmaker that makes some of the most expensive and unusual timepieces you are ever likely to see, has taken to the golf course.

Founded in 2000, the brand has made a name for itself as one of the most sophisticated watchmakers – one that combines the concepts and materials of Formula 1 racing cars with haute horlogerie, all with a unique, high-tech look that is thanks, in part, to the firm’s quest for unusual and highly resistant materials.

Richard Mille, founder of the brand, says of his designs: “It is an expression of my love for all things technical and for automobiles and aeronautics in particular. My watches are efficient and uncompromising, with no use of gimmicks.” The superfluous is removed, only the most advanced materials are used and even the aerospace industry is scoured for this 21st century approach to watchmaking. When the firm launched its first watch – the RM 001 – in 2001, its price tag of 200,000 euros left many wandering at the daring of Richard Mille.

Following a strategy of partnering with exceptional sports men and women, Richard Mille goes beyond the usual ambassador and watch brand relationship and actually develops watches adapted to the rigours of each sportsman and woman. Richard Mille’s watches don’t just look very handsome on the wrist, they are also capable of withstanding the knocks, jolts and extreme hardships of Formula 1 racing, polo, sprinting and tennis.

Because of this, all Richard Mille’s ambassadors wear their watches while in action – a remarkable feat given the G-Force and stresses to which the athletes submit their watches, from F1 driver Felipe Massa to Jamaican sprinter Yohan Blake. Richard Mille’s most high profile is undoubtedly the Spanish tennis star Rafael Nadal, but ever looking for new challenges, Richard Mille has set its sights on the fairway.

To highlight the brand’s commitment to golf, this November the brand will be hosting the Richard Mille Invitational at the Terre Blanche golf course in Provence, Southern France. The event runs from the 19-24 November and is a Pro-Am tournament with a maximum of 19 players. But as well as the opportunity to watch and take part in what promises to be some top-notch golfing in a relaxed atmosphere, there will be two very special guests on the green.

Bubba Watson, the left-handed, big-swinging American golfer and Italian golf champion Diana Luna are expected to be mingling with guests and watching the tournament unfold. Bubba Watson, who is currently 4th in the World Golf Rankings, has worn a white Richard Mille RM 038 Tourbillon on his wrist since 2011, the normally delicate tourbillon movement contained within able to resist the impact of his mighty swing.

Richard Mille focussed on lightness, resistance and comfort when developing the watch specially for Bubba and his long swing. The watch is made of magnesium WE54 with a Miarox® treatment. And, because you asked, magnesium WE54 is an extremely rugged and light alloy composed of 89% magnesium, 6% yttrium and 5% rare earths. With such attention to detail in each and every microcomponent, it is no surprise that the wishbone-shaped ‘V’ of the tourbillon bridge looks like golf clubs. In March 2012, Richard Mille gave Bubba Watson an RM 055 capable of resisting an impressive force of 500 Gs with a rubberised grade-5 titanium case.

Diana Luna is Richard Mille’s first female sports partner. She wears the titanium RM 007 with a white crown and white rubber strap which, like all the RM watches, is shaped ergonomically to fit the wrist and is so light that it does not hamper Diana’s performance. The brand will also be supporting the Lacoste Ladies Open this year, where Diana Luna will be playing, and lending its name to the pre-tournament Pro-Am games of the French Ladies Open.

The Richard Mille Terre Blanche Invitational in November promises to be an interesting event for both lovers of golf and the finest watches you are ever likely to see on the wrist of golfer.