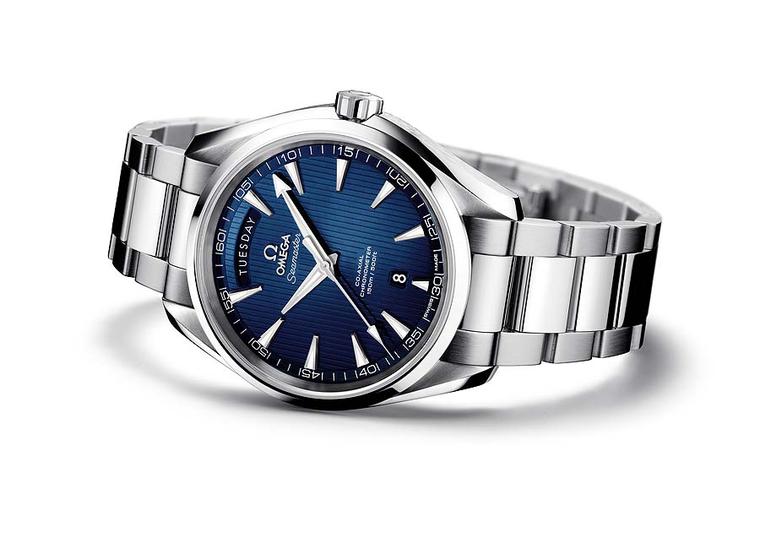 There are many invisible forces in the watchmaking arena, and the two main contenders – friction and magnetism – have been tackled head on by OMEGA. First came the Co-Axial escapement, considered the most important technological breakthrough in watchmaking for the last 250 years. Developed by George Daniels in the 1970s to reduce friction in the movement, the escapement was first incorporated by OMEGA in a De Ville model in 1999 and, a decade later, into all watch collections under its roof.

Today, OMEGA has declared a new offensive against the negative effects that magnetism and magnetic fields wreak on watch movements. The talking piece at Basel this year was OMEGA’s revolutionary Seamaster Aqua Terra, the world’s most resistant anti-magnetic movement, capable of withstanding magnetic pulls of up to 15,000 gauss. Presented in a 41.50mm stainless steel Seamaster Aqua Terra case, this dramatic innovation marks a before and after in precision timekeeping.

For sceptics, here’s a simple test: expose the automatic movement of your watch to a magnet – there are plenty in everyday situations, including those on the inside of your handbag or on your mobile phone – and observe how the movement comes to an abrupt halt. Obviously this affects precision in the long run, and for a watch to bear a COSC chronometer certificate like the Seamaster, a lot of research and development was invested in its development.

Unlike other efforts to combat the effects of magnetism (IWC’s Ingenieur Ref 3508 boasted resistance to 6,250 gauss), the Seamaster Aqua Terra does not rely on a protective container inside the watchcase but on the use of selected non-ferrous materials in the movement itself. Precisely because there is no bulky case to obstruct the view of the movement, the anti-magnetic Co-Axial calibre 8508, equipped with a silicon balance spring, can be admired through the caseback. With its black lacquered dial and vertical decoration, which resembles the teak boarding found on the deck of a ship, the bumblebee yellow and black second hand is proud to demonstrate that no magnet will alter its precision flight path.

OMEGA also presented a new Seamaster Aqua Terra Day-Date, featuring a large, semi-arched window at 12 o´clock, to display the day of the week, and a date window at 6 o’clock. Unlike other day-date displays, which inch along slowly during the day, both indications jump instantaneously at the stroke of midnight. For a sporty look, the Aqua Terra in stainless steel, with a choice of blue, black or silvery coloured dials, is a winner. With a SuperLumiNova coating on the indices and hands, the watch offers fantastic visibility in the dark.

The red gold version takes things up a notch on the luxury scale with its opulent 41.50mm red gold case and red gold rotor and balance bridge visible on the back. Both models are equipped with Co-Axial calibres and are presented with bracelets or leather straps. As members of the veteran Seamaster family, the Day-Date model is water resistant to 150m and, thanks to its robust engine, comes with a four-year guarantee.

The Seamaster Planet Ocean 600M GoodPlanet combines the attributes of a powerful dive watch with a noble cause. Since 2011, OMEGA has supported the GoodPlanet Foundation, and a portion of the proceeds of the new watch will fund a project to preserve the mangroves and seagrasses of Southeast Asia. Powered by a Co-Axial calibre 8605, this handsome 43.5mm Planet Ocean features a bold blue lacquered dial, a date window and a contrasting bright orange GMT scale on the bezel. Not only can you dive to depths of 600m, but you can also track time in two separate zones thanks to the central GMT hand. While the large indices and hands have been treated with blue SuperLumiNova applications, the minute hand and the dot on the diving bezel  – crucial diving companions – emit a green light.