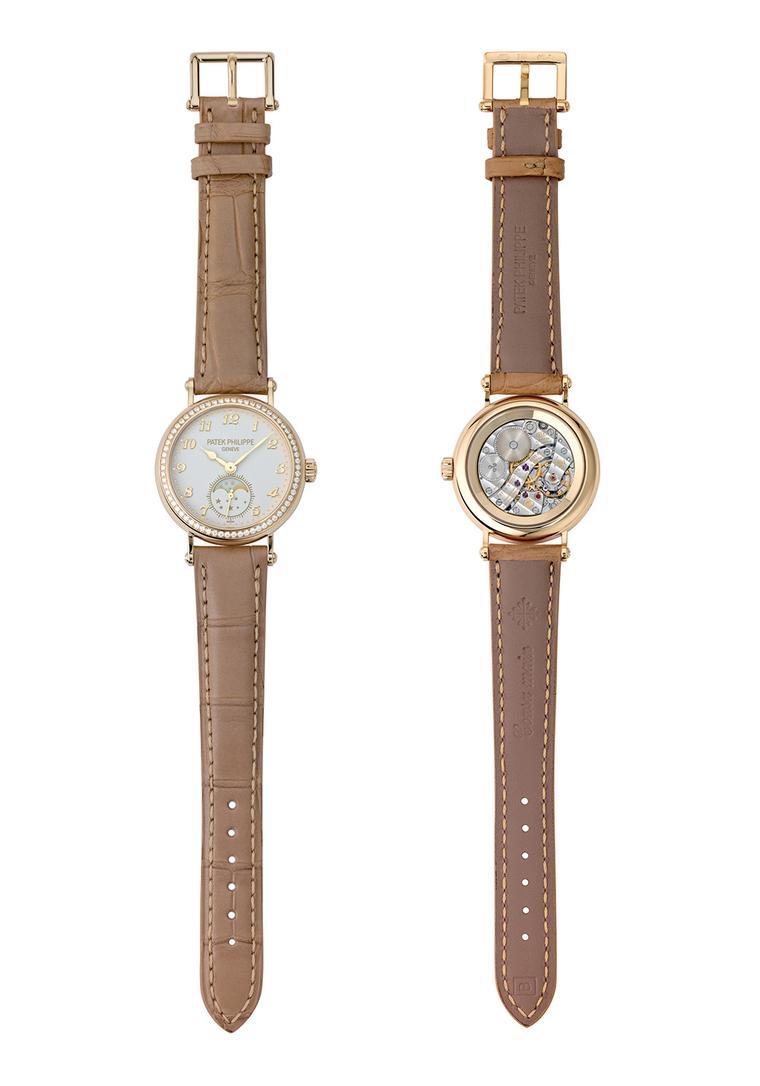 Women with an eye for mechanical complications were indulged again this year by Patek Philippe. It’s been two years since the House of Calatrava decided to raise the bar on women’s watches and open the stage to grand complications. The condition that the watches be as beautiful inside as on the outside prevails in all three complications unveiled this year at BaselWorld.

Originally developed in the 1930s in tandem with the exciting age of air travel, World Time watches were glamorous travel companions displaying the world’s 24 time zones with an exotic choice of cities. In 2011, the first feminine version of Patek Philippe’s famous World Time watch was launched and once again this year, Ref. 7130 fulfils its mission to give the time at the owner’s present location and in all of the planet’s time zones at a simple glance.

Instead of having to change the hour hand to the local time on a trip, a pusher at 10 o’clock allows you to advance to the destination time zone while the city ring and 24-hour ring move counter-clockwise without affecting the minute hand. This highly complex series of adjustments are possible thanks to the automatic winding calibre 240 HU. Presented in a red gold 36mm case, the bezel is set with 62 diamonds, which illuminate the vintage ivory coloured dial and its beautifully hand-guilloched hour dial. Beady-eyed women will notice that the city names featured on the ring have been updated to comply with the new official time zone designations. Caracas, for example, has been substituted for La Paz, Moscow moved to Dubai’s former zone, and in its place is the city of Riyadh.

Introduced in 1932, the Calatrava is Patek Philippe’s signature round, classically understated men’s watch. Equipped with a moon-phase complication and a dazzling ribbon of 66 brilliant-cut diamonds on the bezel, the Calatrava (Ref. 7121) has migrated to daintier wrists. Its hand-wound movement (calibre 215 PS LU) can track the Moon’s phases with such precision that a correction is needed only once every 122 years. The silky beige dial, starry diamond bezel and moon-phase display provide a dreamy background that captures the magic of the night sky. Crafted in yellow gold, the 33mm Calatrava case is formed from solid gold blanks and polished by hand.

For women on the move, the Calatrava Travel Time (Ref. 7134) simplifies the task of calculating home and local times in grand style. There are, in fact, two hour hands that, when  superimposed, indicate home time. If you travel to a different time zone, simply set the main hour hand to local time using one of the two push pieces on the left side of the case. The skeletonised hand will continue to indicate home time, and a 24-hour dial at 12 o’clock will remind you whether it is day or night at home. The 35mm white gold case with 112 diamonds on the bezel houses a manually wound movement and frames the rich chocolate-brown dial, with a useful subsidiary seconds counter at 6 o’clock.