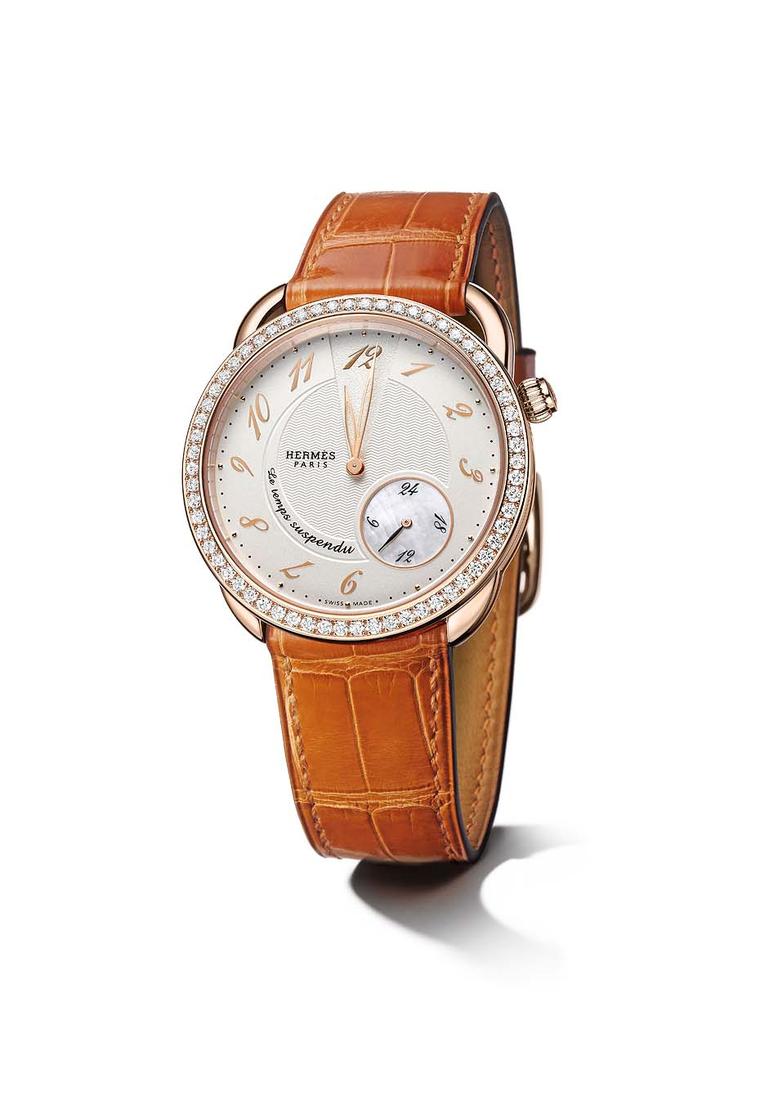 The Arceau model is increasingly becoming one of the most exciting watches in the world of Hermès horology. This round watch, with its generous case proportions and sober aesthetic, may not be as instantly recognisable as the Cape Cod or the double strap H Heure, but it is making waves in its own quiet way.

It’s no secret that Hermès has been steadily settling into the realms of more complex watch mechanisms. Hermès, which never does things by halves, has its own manufacturing complex in Switzerland in association with the prestigious Vaucher company. Each and every detail of the Arceau range is as exquisitely executed as a Kelly bag and, like every other Hermès creation, made to last beyond a lifetime. And the design team has chosen the Arceau to showcase its very own mechanical  ‘complications’ with a special Hermès twist.

The first is the Arceau Le temps suspendu. This watch is not new, but these are the first versions of this quirky complication made expressly for women. Le temps suspendu presents a fresh look at the philosophy of time with a playful attitude and encourages taking a respite from the ceaseless pressures of the day by quite literally suspending time. Push the button on the side of the case and the hands fly to a position somewhere near 12 o’clock, where they stay until they are summoned back into action to resume their time-keeping function – and all of this without loss of precision.

The new models are presented in smaller 38mm stainless steel or rose gold cases, with the option of a circle of diamonds around the bezel. Every detail of the watch is lovingly executed, from the engraved herringbone pattern shimmering through the opaline finished dial to the opulent, swirling gold numerals. The automatic mechanical movement, generously embellished with hand-finished decorations, is just as beautiful.

A brand new Arceau has just arrived. The Arceau Lift is only the second tourbillon to sit in a watch stamped with the Hermès logo. True to Hermès’ spirit of doing everything its own way, the Lift is inspired by the 1923 elevator in the famous 24, Rue de Faubourg Saint-Honoré boutique in Paris. And believe me, this is the very first watch I have seen inspired by a lift.

As improbable as it sounds, the curling forms of the wrought iron banisters, hand rails and, of course, the lift of the boutique are integrated into the design. These stylised curves are mimicked in miniaturised versions in the barrel bridge and on the tourbillon carriage, with surprisingly pleasing results.

The tourbillon mechanism, invented in 1801 by Abraham Louis Breguet, places the escapement in a constantly rotating cage in order to counter the effects of gravity on the precision of this delicate part of the watch. Furthermore, the Lift is a ‘flying tourbillon’ – Hermès’ first – making it appear to fly unsupported in its rotations.

The Calibre H1923 was developed specifically for this movement, and the open dial showcases the beauty of this miniature mechanical marvel, all with a very Hermès touch. The movement is hand-wound and partly visible through a little peep hole on the case back, surrounded by an elegant engraving of the Hermès caleche or carriage, reminding us of the origins of this firm, which started life making leather harnesses.