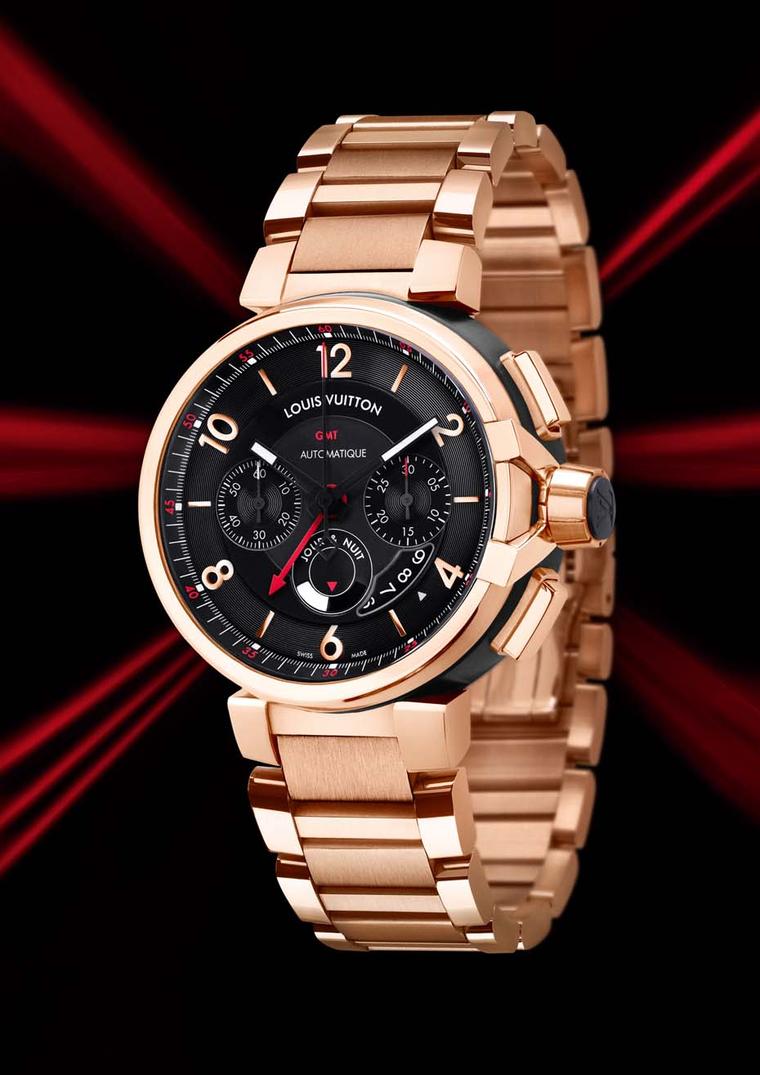 The new Louis Vuitton Tambour eVolution has an unusual name that hints at its surprising nature. For the past 11 years, since Louis Vuitton launched its first Tambour watch, we have come to associate the drum-shaped case with this brand. One glance under a cuff, at the watch’s deep and generously curved bezel, and there was no mistaking it was signed by Louis Vuitton.

But the eVolution takes the drum-shaped case and makes it new. This is not a revolution but an evolution, however. Its once rounded curves are replaced with cleaner, tauter lines for a more masculine and edgy feel. The flamboyant eight-sided crown is replaced with a more sober round version, and the words Louis Vuitton, which were previously engraved on the case, have been condensed into a powerful ‘V’ shape that flanks the crown protectively.

In the spirit of innovation, an interesting new material has been used in these new models, sandwiched in-between either stainless steel or pink gold to achieve a futuristic, high-tech feel. The material is Black MMC or Metal Matrix Composite, which, thanks to its exceptional resilience and lightness, is more normally used in the construction of a space shuttle or Formula 1 car.

The dial echoes the spirit of technical expertise and mechanical rigour of the eVolution. Move the watch slightly into the light and it shimmers enigmatically with three different surface treatments on the dial, which add a richness of texture without losing the gravitas of the mechanical pedigree of the movement that lies below. The edge of the dial has an alluring blued finish, and fine grooves of satin sunray polishing glint under the numerals. In contrast, the centre of the watch features a matt opaline finish.

The more complex GMT chronograph features a secondary time zone indication via the red hand as well as a corresponding day and night indicator alongside the elapsed time counters of the chronograph. All of this is highly visible and clear thanks to the refined dial work and large metal numerals.

The dial is a reflection of the perfection of the movement. There are two variants, the GMT day/night version and the GMT chronograph. The first is powered by the LV71 and the latter the LV92. Both are self-winding and, with a rate of 28,800 oscillations an hour, are designed for precision timekeeping. Handy for the traveller, both watches have a 42 hour power reserve and are resistant to 100m.

This brave new design is destined to become another icon of Louis Vuitton as it makes its entrance with strength and confidence.