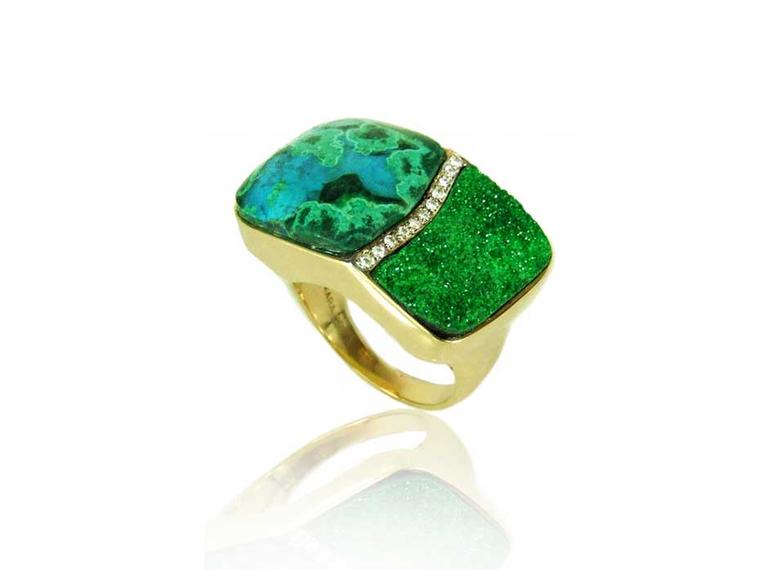 Garnet is the birthstone of January and a fascinating gemstone to usher in the new year. Garnet jewellery, popular since the age of the pharoahs, has a long and storied history, not to mention a range of colours and varieties that will surprise even the most ardent fans.

When it comes to unearthing the exquisite ruby red pyrope garnet, ants may be the world’s most industrious miners. Also known as anthill garnets, the stones are brought to light by ants clearing their underground passages of debris. Because the ants can only push small crystals, most of these gems will be less than 0.25 carats. Once the ants have pushed them to the surface, the garnets roll down the slope, where their vibrant crimson makes them easy to spot on the dry ground.

Many of these anthill garnets are found on the Navajo Nation in Arizona, where prospectors collect them in much the same way as they have for hundreds of years when the garnets were used as weapons in slings. The red colour was considered symbolic of the blood of slain animals or enemies.

Fortunately, other types of garnets are found in places besides anthills. In fact, the term “garnet” actually refers to a group of more than 10 different gemstones, all with a similar chemical composition. Within this group, gemmologists recognise six different subgroups: pyrope, almandine, spessarite, grossular, andradite and uvarovite, which are extremely rare. They come in nearly every color and with just about as many names. The number of trade names can be overwhelming and even then it’s hard to know exactly which garnet is being referred to as two or more types, such as an almandine and a pyrope, might attach to form a new stone.

Spessarite garnets, also known as mandarin garnets, are a stunning orange-red colour, captured beautifully in this high jewellery Louis Vuitton ring. For years these garnets were so rare only a few specialists knew about them. Then a discovery along the Kunene River on the border between Namibia and Angola took the gemstone world by storm. A few years later, another deposit was uncovered in Nigeria and, since then, spessarite garnets have become highly prized for their beautifully scintillating colours.

Green garnets come with several different names. Grossularite tends toward earthy green with hints of brown or yellow. An exceptionally brilliant green deposit was discovered in Mali that elevated grossularite to new heights. The discovery of tsavorite, a brilliant green grossularite from northeast Tanzania, is credited to Scottish gemmologist Campbell R. Bridges, who uncovered a deposit in 1967.

Many consider demantoid garnets, with a brilliance that rivals diamonds, the ultimate green garnet. Their Dutch name means “diamond like” and these amazing stones have the ability to refract light into all colours on the rainbow spectrum even better than diamonds. The demantoid garnets in Hemmerle’s one-of-a-kind earrings have been reverse set, revealing the harmonious spectrum of yellow-green hues for which this variety of garnet is so prized. Early demantoid garnets came from Russia’s Ural Mountains, but a discovery in Nigeria in the 1990s has brought these once unheard-of garnets to the forefront of fashion.

Almandine garnets are the deep scarlet or purplish translucent stones we might find on our grandmother’s brooch. These stones were once used as ruby substitutes and seem to be a mainstay in vintage jewellery. Their rich hues come from iron. Although these garnets may seem fairly common, truly rare specimens are a priceless treasure.

New finds from around the world keep the garnet clan one of the most dynamic and colorful gemstone families around. Their stimulating colours radiate warmth and happiness. With their vast range of shades and tones, everyone can find a piece of garnet jewellery to love.