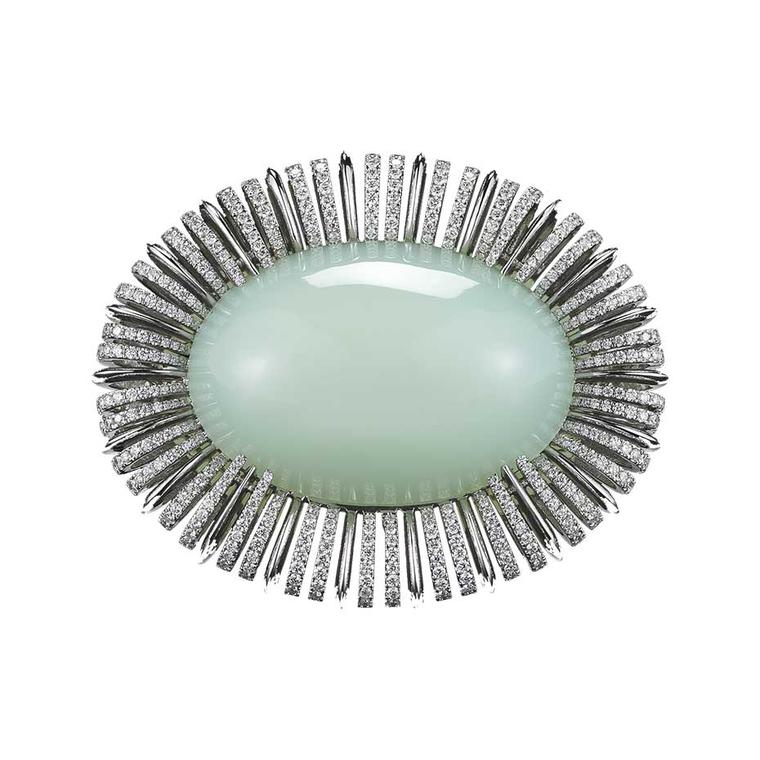 Colourful cabochon gemstones are daring, distinctive – and coming to a jewel near you.

A big trend in the world of jewellery design, these spectacular gemstones appear in many guises. One of the oldest forms of gem cutting, the technique involves giving a gemstone a curved, dome-like shape before smoothing the surface and polishing it. The bottom of the stones tends to be quite flat, making them ideal for setting into jewellery.

While the majority of cabochons have a smooth, curved surface and are round, oval or cushion shaped, there are some interesting varations. Among the most rare – and therefore desirable – is the sugarloaf cabochon, which is conically shaped and comes to a rounded point at the top, like a mountain. This Faraone ring is set with a wonderful sugarloaf cabochon sapphire and shows just how unusual this cut is, with the polished surfaces making it possible to see deep into the stone.

David Morris created a ring for the Biennale des Antiquaires in Paris that stars another unusual variation, the double cabochon, which is precisely as the name suggests – two cabochons in one or, in the case of this one-of-a-kind David Morris ring, a single 64.55 carat sapphire cut into a perfecly smooth sphere.

Equally impressive is an Alexandra Mor ring that spans two fingers, from the New Classics collection, which boasts a 42.00 carat oval Andean blue opal cabochon set in black gold and surrounded by diamonds.

Two other cabochon jewels that caught our eye at the Biennale in Paris were a Boucheron ring from the Fleur des Indes collection starring an Indian emerald cabochon that shimmers in shifting shades of green, together with a groovy pair of Piaget earrings from the 70s-inspired high jewellery collection Extremely Piaget, set with two majestic sugarloaf cabochon emeralds and four emerald beads.

Sapphires lend themself very well to the cabochon cut because they are extremely hard stones, measuring 9 on the Mohs scale, so are less likely to scratch, which detracts from the beauty of a cabochon gemstone. Robert Procop’s double dose of cabochons boasts two smooth, intensely coloured sapphires sitting on either side of a twisted diamond band.