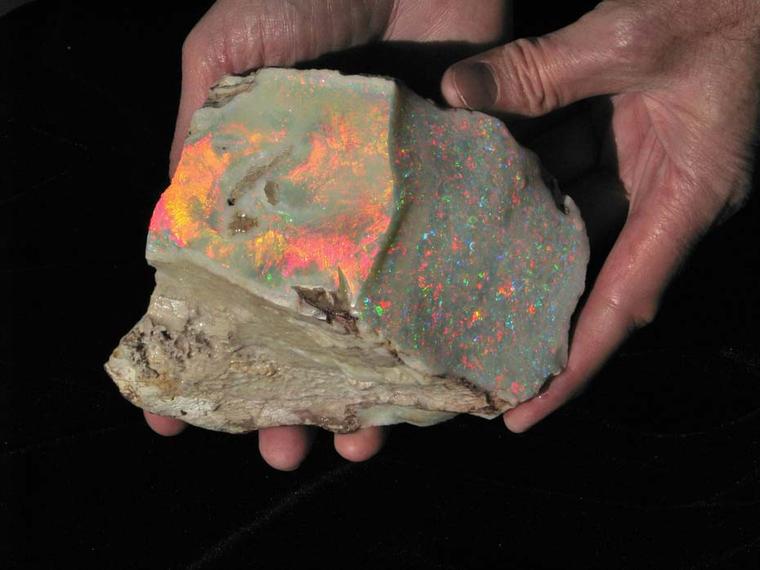 By Melissa Pearce in Sydney

Building up since February, the celebrations marking the centenary of Coober Pedy opal mining in Australia will reach a crescendo at the end of this week.

A host of special events are planned over the Easter holidays in the small mining town 846km north of Adelaide. Highlights include a street party and multicultural festival celebrating the more than 40 nationalities that call Coober Pedy home, a formal ball, and a bumper edition of the annual Coober Pedy Gem Trade Show.

Famous Australian opals include the prized black opal from Lightning Ridge in New South Wales, which is known for its dark blue tones with dramatic flares of green and red, while Coober Pedy opals have a light, milky base. Yanni Athanasiadis, opal dealer and owner of the Umoona Opal Mine and Museum, as well as president of the Gem Trade Show, explains: “Crystal opal from Coober Pedy is top of the range. Its transparency, brilliance and variety of colours – from red, orange and yellow, to green, blue and violet – make it a unique and desirable stone.”

Read more about the history of opals here

Known as the Opal Capital of the World, Coober Pedy produces 85% of the world’s opals. As production of good-quality opals is diminishing, its value is increasing at a rapid pace, priming its investment potential. John Dunstan, an opal miner of 48-years-standing and owner of John and Yoka’s Opal Store, says of Coober Pedy opals: “The prices for rough opal range from low grade to high grade, from AUD$300-400 a troy ounce to AUD$8,000 a troy ounce. There’s something for everyone.””

Coober Pedy was originally known as the Stuart Range Opal Field, named after John McDouall Stuart, who in 1858 was the first European explorer in the area. On 1 February 1915, the New Colorado Prospecting Syndicate, consisting of Jim Hutchison and three others, lucked upon Australian opals after unsuccessfully searching for gold just south of the area.

The men had set up camp and were searching for water when the youngest member of the party, Hutchinson’s son William, aged only 14, found pieces of opal on the surface of the ground. In 1920, the Stuart Range Opal Field was re-named Coober Pedy – an anglicised version of the Aboriginal words “kupapiti” or “white man in a hole”.

Coober Pedy has always been a testing environment – with the effort required to locate a field and the mining itself equally arduous, and never more so than in the town’s founding days. The Bartrams, an established local opal mining family, began mining in 1936 when John Bartram explored Andamooka, south of Coober Pedy. In a report of an early journey to the Australian opals, he recounted three days of very difficult travel in a Model T Ford over camel tracks, dry riverbeds and large sand hills, often in extremely high temperatures.

Read about the superstitious history of opals

Once a claim was established, the next challenge began. Mining was carried out by hand with a pick and shovel – a far cry from today’s modern mining equipment. Not to mention the peak summer temperature average of 47 degrees Celsius. Today, half of the approximately 4,000-strong population lives in underground dugouts and many residents clear out of town over the summer.

While the pioneering spirit of these early miners will be toasted this Easter, and the finest Australian opals from Coober Pedy proudly displayed, gemstone dealers from Sydney to Beijing will also be admiring the destination’s striking surrounds, such as the Breakaways Conservation Park – the second Aboriginal-owned park in the state of South Australia – and the 80-million-year-old Painted Desert – an ancient inland sea bed that is as stunning at sunrise as it is at sunset. The otherworldly moonscape of Coober Pedy was a fitting backdrop for the 1985 movie Mad Max: Beyond The Thunderdome.