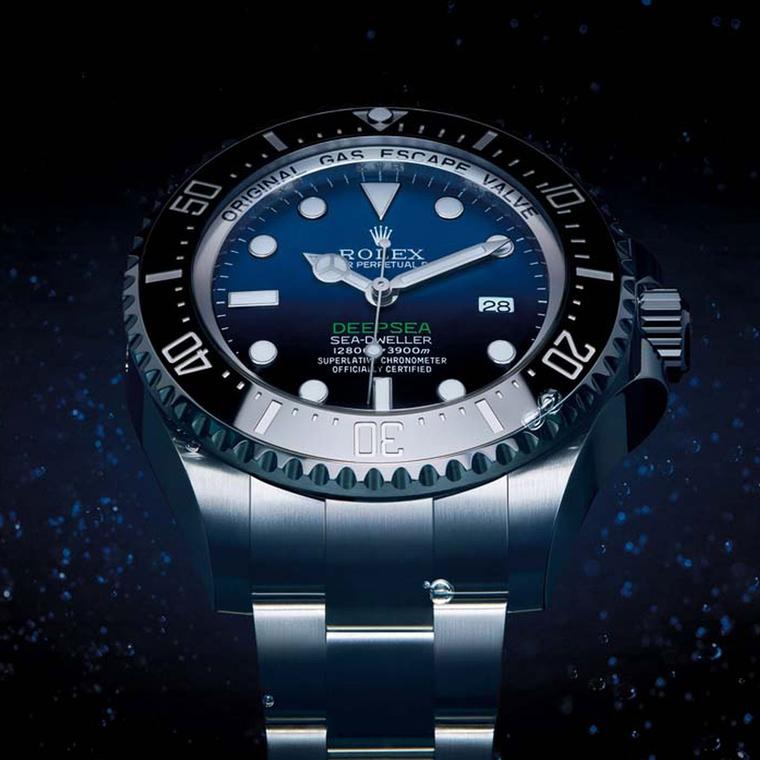 James Cameron’s documentary of his record-breaking solo journey to the abyss, Deepsea Challenge 3D, was released to audiences in the US last week. And as sponsor of this singular adventure and intrepid underwater companion, Rolex has launched a new version of its Oyster Perpetual Deepsea diver’s watch with a symbolic D-Blue dial.

It will come as no surprise that the director of ocean dramas like The Abyss and Titanic – the highest-grossing film of its day, only to be outdone by another of his creations, Avatar – is obsessed with the deep blue.

Cameron’s latest documentary chronicles the preparations and building of the mini submersible for his 2012 voyage to “the last great frontier of the world”.  Filmed at almost 11,000m under the sea, in the deepest point of the world’s oceans known as the Mariana Trench, Cameron extols the beauty of the deep and marvels at the “alien world” before him. Ocean exploration is his mistress. “Am I a filmmaker who does exploration work on the side,” he asks himself during the documentary, “or am I an explorer who does filming on the side?”

Read about Rolex on our list of top five iconic watches

Existential doubts apart, Cameron was accompanied in his one-man submersible – his “metal coffin” – by three specially designed Rolex Deepsea models. At depths that could house Mount Everest with room to spare, Cameron shot six hours of footage with eight high-definition cameras. Outside, attached to the hull of the sub, three muscular 51.4mm Rolex diving beasts withstood pressures of up to 12 tonnes and surfaced unscathed.

Like Cameron, Hans Wilsdorf, the founder of Rolex, was always up for a challenge. Whilst hosting a dinner party and prying open an oyster, Wilsdorf had a flash of inspiration: why not build the world’s first watertight watch?  The ensuing Oyster watch would become the world’s first patented, totally watertight watch. To prove his point, Wilsdorf got Mercedes Glietze to wear one of his new models on her cross-Channel swim in 1927. The London stenographer emerged after 15 freezing hours in the water with her Oyster in perfect condition.

A pioneer in the conquest of depths, the 1926 Rolex Oyster watch was followed by professional diver’s watches like the Oyster Perpetual Submariner (1953), the Sea-Dweller (1967) and the Rolex Deepsea (2008), which has become an iconic model among divers.

The beautiful D-Blue dial on this latest Rolex Deepsea watch evokes the changing colours of the water during Cameron’s solo descent. Graduating from a brilliant azure blue at the top of the dial, the colour intensifies and darkens to a bottomless black representing the abyss.

Like its 1967 predecessor, this new Rolex Deepsea watch features a patented helium escape valve – a mini decompression chamber for the watch that is fundamental for deep-sea dives.

Equipped with an exclusive Ringlock system and a 5mm-thick sapphire crystal, the latest Rolex Oyster Perpetual Deepsea watch is built to withstand massive pressures exerted by water at depths of 3,900m, which is roughly equivalent to placing an object of three tonnes on the watch.

Another innovative feature is the Chromalight display on the dial, which allows the indices, hands and zero marker on the bezel to glow with a supernatural blue light for twice as long as standard luminescent materials – more than enough light to spot those strange creatures as they float past your porthole.

Read about other iconic watches for men