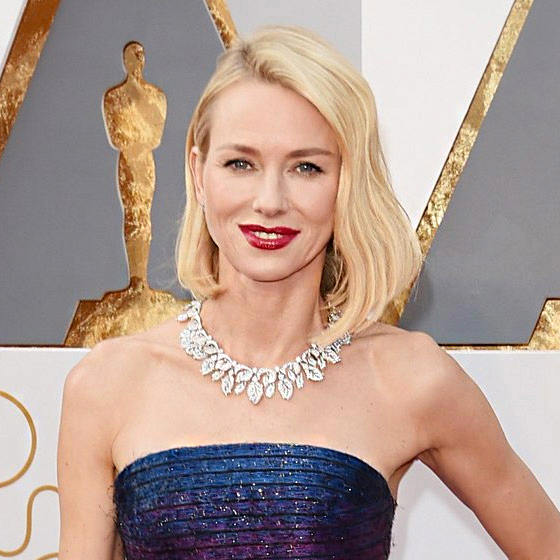 We’ve been up since the crack of dawn checking out ALL the coverage in order to bring you the hottest Oscars 2016 red carpet jewellery trends but despite the red eyes and smoking keyboards we have to say it’s been worth the sleepless night!

Diamonds and white metals, mostly platinum, were without doubt the big winners of the night with Hollywood’s leading ladies literally dripping in dazzling rocks. Charlize Theron sported a staggering $3.7 million worth of Harry Winston Diamonds, whilst Naomi Watts had a lot to smile about in a petal-motif Bulgari diamond necklace.

Jeweller to the stars Lorraine Schwartz dressed her ladies in diamonds so big they almost didn’t look real, whilst Forevermark was responsible for a number of the most directional designs including a circle-design lapel pin for magazine editor George Lotsiopoulos and a stunning serpent bracelet worn by Olivia Munn.

Away from the classic white gems, coloured stones came to the fore, most notably in a spectrum of blues and greens. Pearls, too, put in an appearance with modern updates worn by model Liberty Ross and actress Kate Capshaw.

And this was just for starters. For more looks hot off the red carpet, as well as at the infamous Vanity Fair and Elton John post-awards parties, check out our coverage below and prepare to be dazzled! 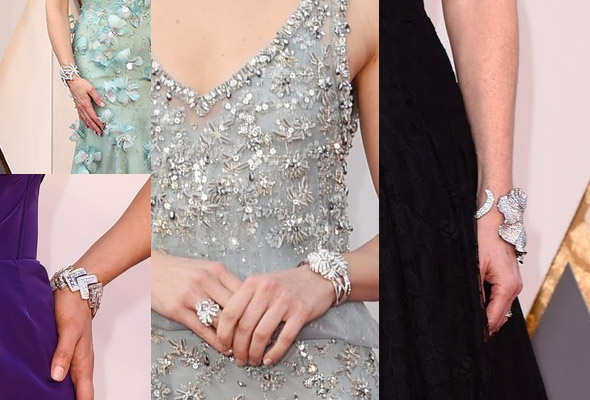 Cate Blanchett wore a divine starfish bangle in platinum with round diamonds from Tiffany & Co’s Blue Book collection whilst Reece Witherspoon bucked the trend for organic arrangements in a cute chevron-link bracelet. Both Daisy Ridley and Julianne Moore opted for pieces that featured a dramatic floral design on a slender bracelet setting. 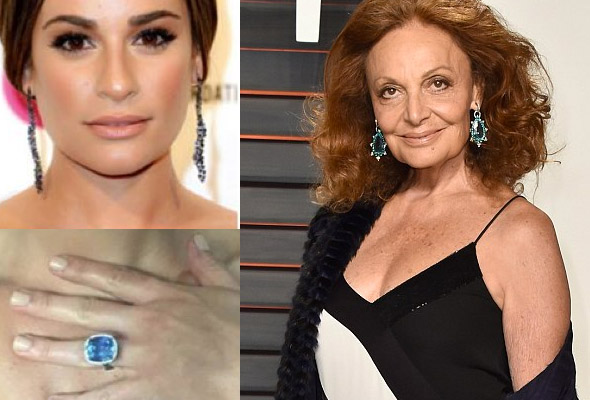 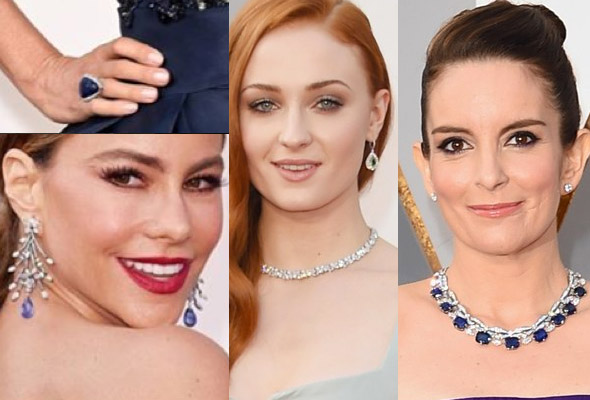 Blue came out in force with sapphires unsurprisingly dominating. But we loves the paler tones apparent in pieces worn by designer Diane Von Furstenberg and Sophie Turner that looked like aquamarines or blue topaz. 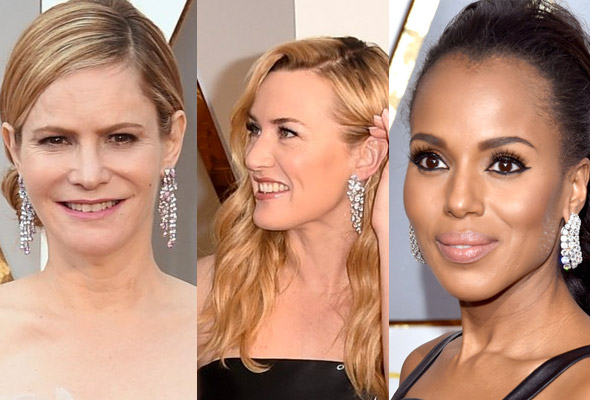 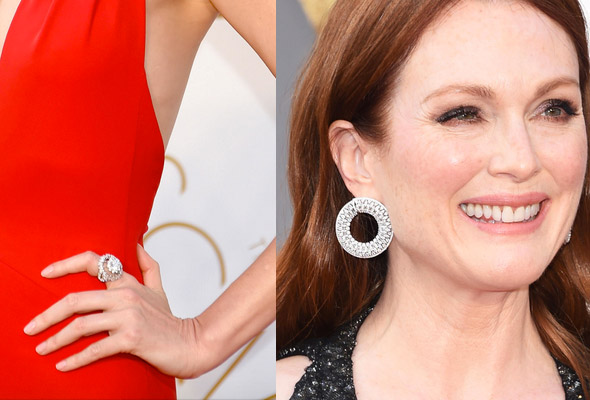 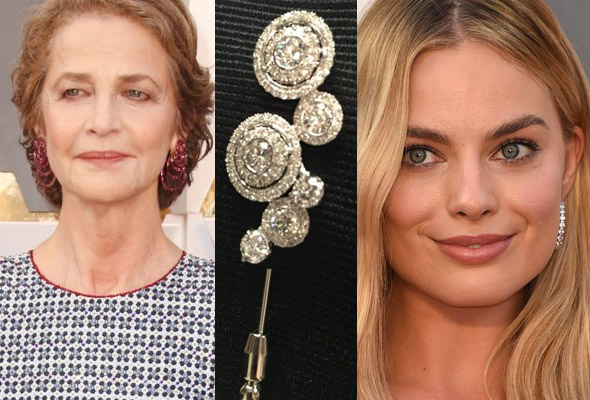 Bedecked in Harry Winston’s ‘Secrets Collection’ Charlize Theron made us swoon, but it was the details – such as her circular ring – which really made us take note. Julianne Moore rocked 13 carat diamond white gold Chopard earrings and doing it for the boys George Lotsiopoulos wore a bespoke Forevermark diamond lapel pin. 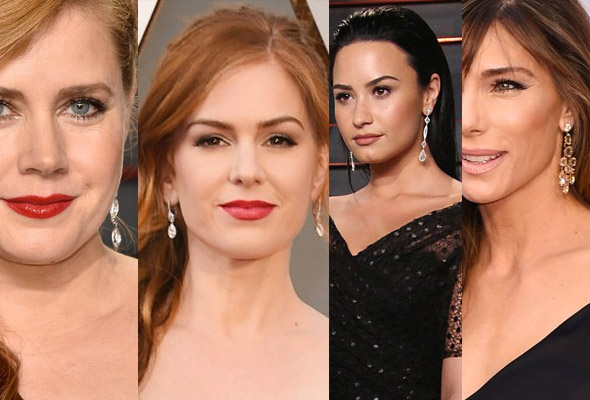 This ever-appealing look is pretty as a picture. And when things are this simple, it pays to explore the potential of unusual or mismatched cuts as these pieces demonstrate. 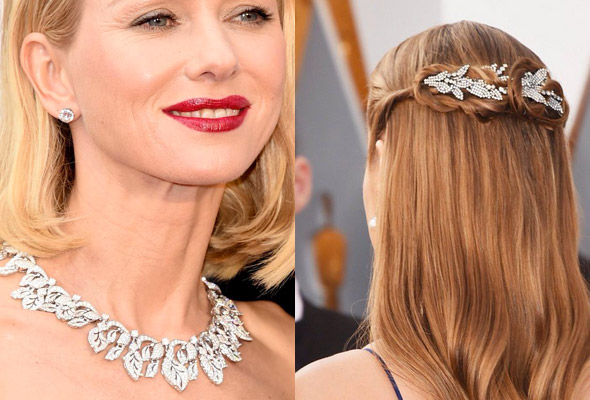 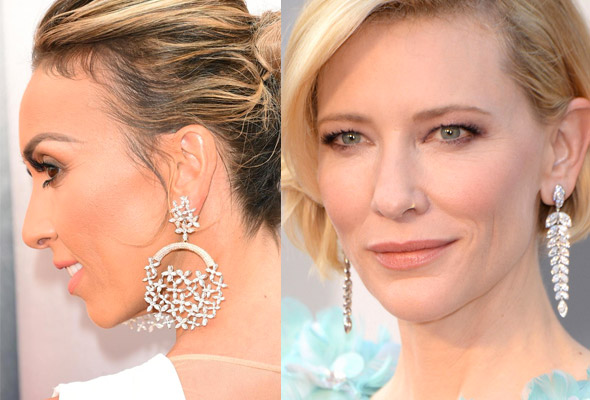 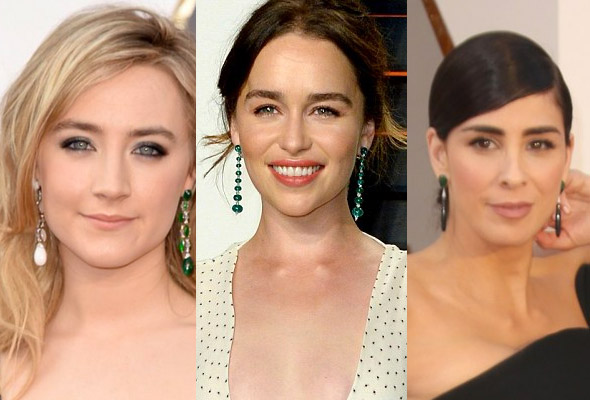 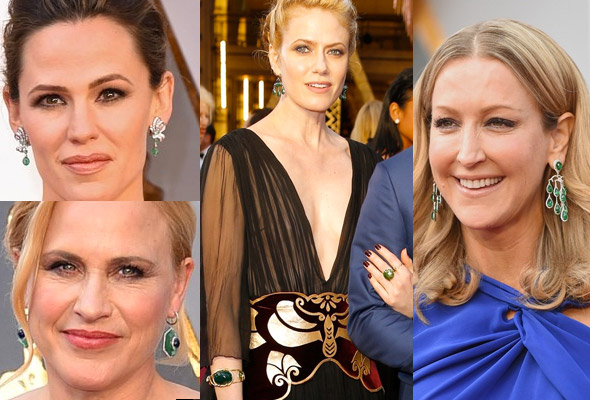 We’re big fands of green gems here at Adorn HQ so we were thrilled to spot a riot of vibrant greens freshen up the Oscars this year. Our fave look by a mile was Saoirse Ronan’s mismatched Chopard earrings featuring pearls, 18 carats of emeralds, nearly six carats of jadeites and 3.25-carats of diamonds set in white gold. FYI we’re also crushing on Sunrise Coigney’s total-look approach to colourful jewellery! 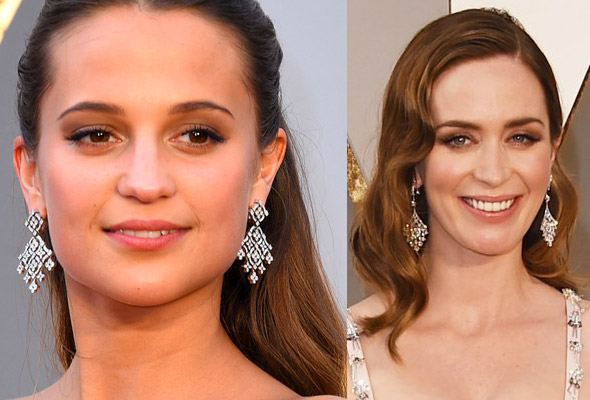 Pretty shapes always appeal and these lace-like designs really win points. We love the fretwork inspiration and the movement in thes 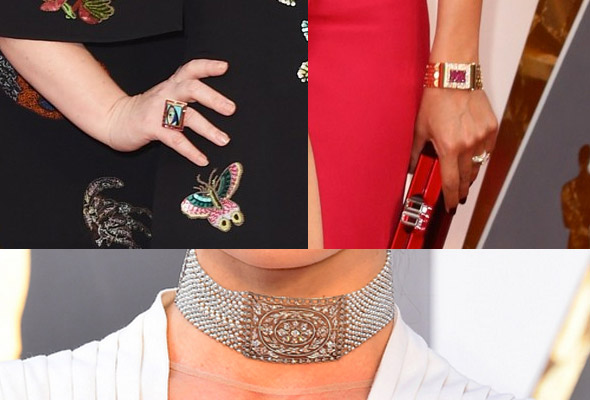 The rectangular frame-shaped setting of these pieces caught our attention for the way it heroes a pretty detail, from Amy Poehler’s ‘Eye’ ring to the vintage stylings of Olivia Wilde’s early 1990s-style choker and Luciana Damon’s Art Deco ruby and diamond bracelet. 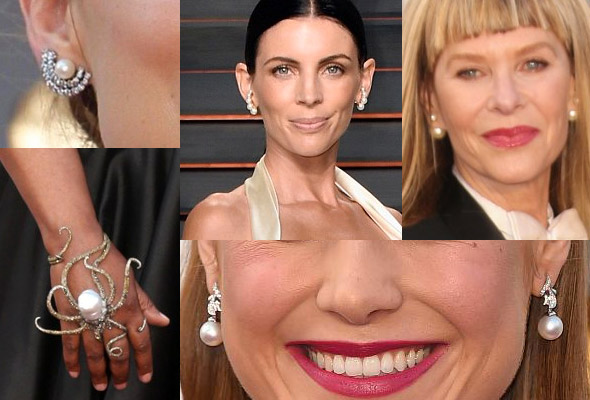 Pearls came in for some interesting treatments as you can see from the image above. Brie Larson wore diamond and pearl earrings by Niwaka and Olivia Wilde’s Neil Lane crescents wowed. But for sheer drama, Whoopi Goldberg’s octopus hand piece by Turkish jeweller Sevan Bicakci really stole the show! 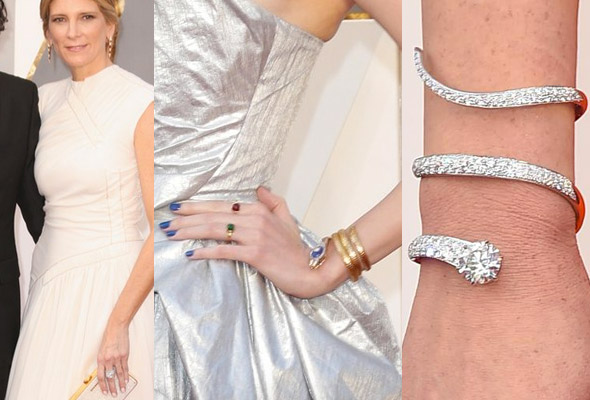 Olivia Munn had a $1 million snake coling up her arm and boy did it have bite! Courtesy of Forevermark by Jade Trau, and featuring a 12.06 carat round brilliant diamond, it was the star of a snaky trend that included Maria Eladia Hagerman’s Bulgari ‘Serpenti’ pieces and model Lily Cole’s pretty gold coiled bangle. 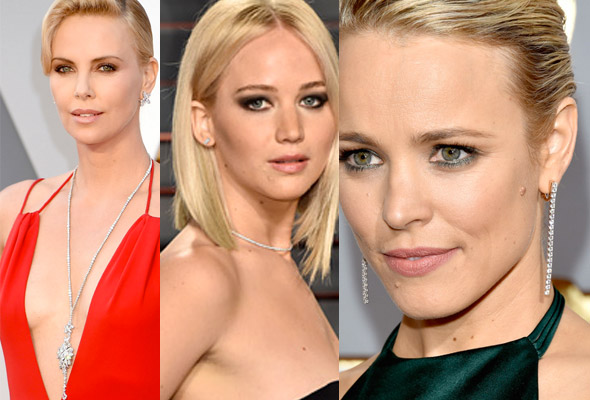 Coverage naturally focused on Charlize Theron’s Harry Winston ‘Secret Cluster’ pendant with its 48 carats of diamonds. But what we like is the contrast between the elaborate pendant and the single row of diamonds from which it’s suspended. As with the other examples above, a single row of gorgeous sparklers can be surprisingly dramatic. 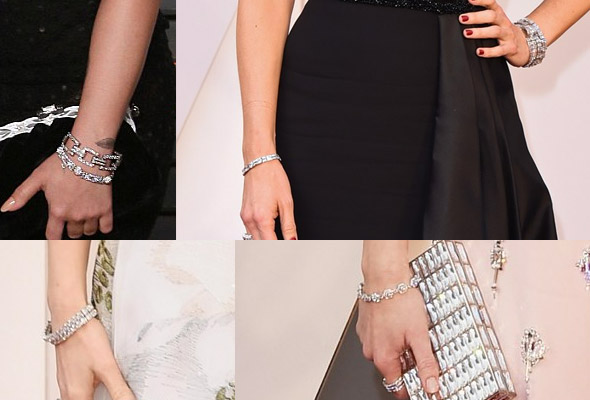 Sometimes you just want to wear something timeless and when you do a simple diamond bracelet has to be the answer. 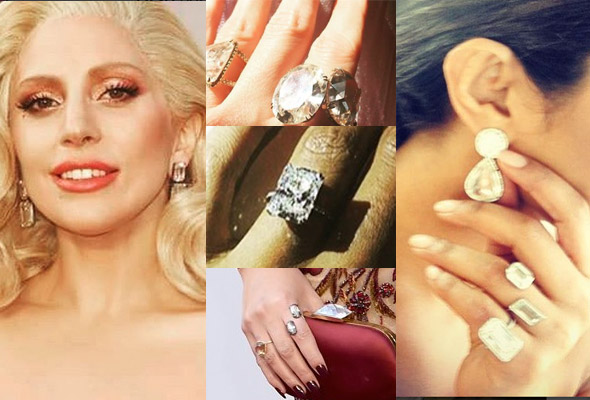 There’s nothing like a diamond solitaire and there really was nothing quite like these babies all courtesy of red carpet jewellery supremo Lorraine Schwartz. Modern and marvelous, who wouldn’t want one or three of these in their jewellery box?! 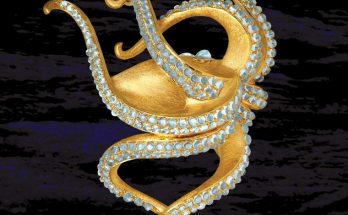