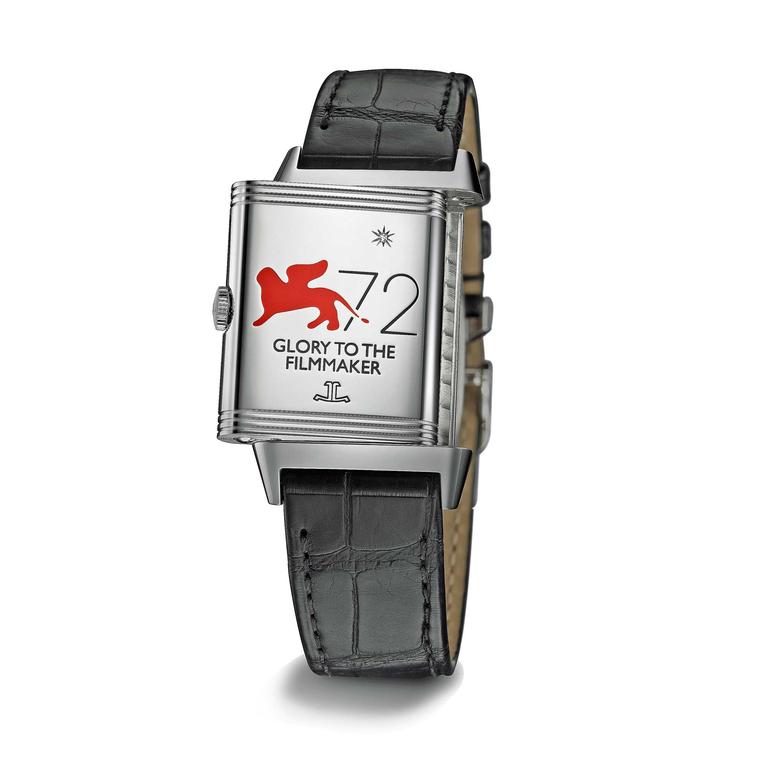 Legendary American film director Brian De Palma was presented with the 2015 Jaeger-LeCoultre Glory to the Filmmaker Award at the 72nd Venice International Film Festival this week in what is a very special year for the Swiss watch brand and the festival as they celebrate the 10th anniversary of their partnership and the presentation of the 10th award of its kind. This prestigious award honours those who have made innovative contributions to contemporary cinema, with past winners including James Franco, Spike Lee and Al Pacino.

At the ceremony on Wednesday, Daniel Riedo, CEO of Jaeger-LeCoultre watches, spoke passionately about the company’s commitment to promoting creativity and ingenuity in cinema. “Precision watches and the maximum expression of the cinematographic art are fruit of the same passion,” he said. “Both call for months and even years of concentration and patience, in order for the virtuosity of talented professionals to lead to the creation of masterpieces of aesthetic and technical perfection, destined to last forever.” The luxury Swiss watchmaker describes the relationship between cutting-edge cinematography and horology as a shared obsession of immortalising time into a unique moment. Both industries are about looking forward and remaining innovative while, at the same time, preserving their long-standing legacies.

Jaeger-LeCoultre has been the official partner of the Venice International Film Festival for almost a decade, with its wide-ranging support of the 7th art of cinema spanning all corners of the globe. The company not only sponsors the film festivals of Venice, San Sebastian, Toronto, New York, Los Angeles and Shanghai, but has also launched initiatives such as the Filmmaker in Residence Program as part of its partnership with the Film Society of Lincoln Center in New York. Since 2013, this partnership also encompasses the annual Chaplin Award Gala and the New York Film Festival, both of which are organised by the Film Society of Lincoln Center.

The first Jaeger-LeCoultre Glory to the Filmmaker Award at the Los Angeles Film Festival was introduced last year, and the 39th Toronto International Film Festival saw the launch of the inaugural TIFF Rising Stars. The latter is an initiative that takes four selected actors through a professional “boot camp” where they receive training and advice from a team of coaches, which includes international casting directors, filmmakers and producers.

As an official partner of the Shanghai Film Festival for the past five years, Jaeger-LeCoultre has played an instrumental part in preserving the Chinese cinematographic heritage by funding the restoration of old movies. At last year’s film festival, a screening of Chinese Film Masterpieces Restored by Jaeger-LeCoultre showcased the fruits of its painstaking efforts, which have continued this year with the restoration of a film by Wu Yusen, aka John Woo. The watchmaker has also struck up individual relationships with many leading actors, which has resulted in Jaeger-LeCoultre watches gracing the wrists of stars such as Diane Kruger, Clive Owen, Sarah Gadon and Carmen Chaplin on the red carpet.

This week’s award ceremony in the Sala Grande Palazzo del Cinema was followed by the world premiere of the documentary De Palma, which chronicles the director’s six-decade-long filmmaking career. The movie version of Stephen King’s Carrie first put Brian De Palma’s name on Hollywood’s radar and he went on to direct more than 30 films, including The Untouchables, Mission Impossible and Scarface. He is also renowned as the director who gave a 20-year-old Robert De Niro his first-ever part in a film.

Throughout the Venice International Film Festival, which continues until 12 September, a retrospective photographic exhibition presented by Jaeger-LeCoultre, to commemorate a decade of its involvement, has been providing a fascinating insight into the filmmaking process of past winners of the Glory to the Filmmaker Award at the Excelsior hotel.