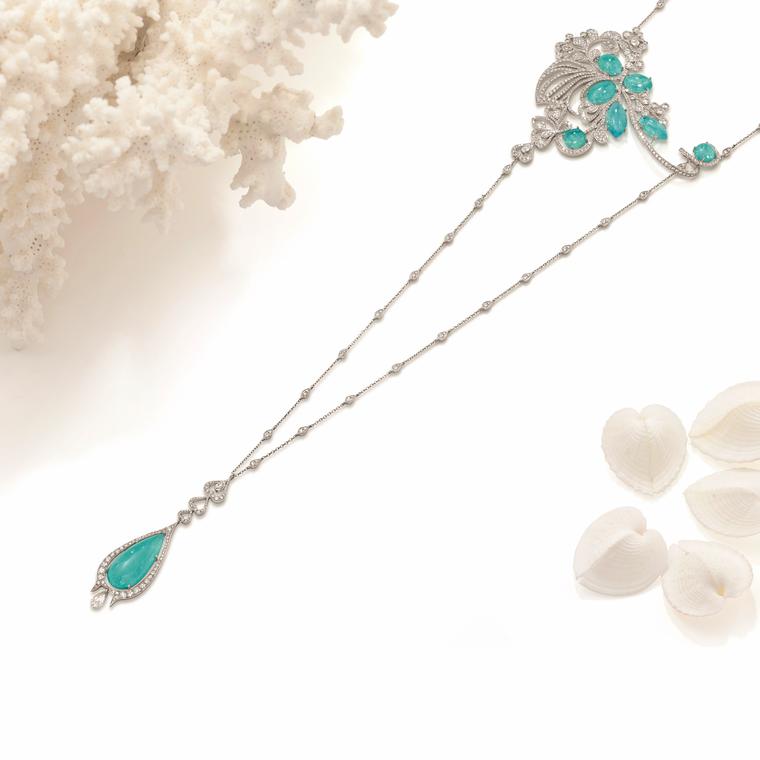 Imagine the clearest, most majestic blue-green ocean distilled into one single gemstone and chances are that you’re still not even close to conjuring up the magnificent hue of Paraiba tourmalines.

The stone was first discovered in 1989 by Heitor Dimas Barbosa, a miner who was so convinced that something very special was lurking in the hills of the Brazilian state of Paraiba, he spent five years digging before he was rewarded with the first glimpse of this mesmerising gem.

Read more about the electric story of the Paraiba tourmaline

The frantic clamouring for Paraiba tourmalines that ensued led to the original mine being virtually depleted over the course of just a few years. Further excavations in the Paraiba hills have so far been futile, and hopes that another discovery will be made in Brazil have all but dwindled. All of which has, naturally, helped push the price of this beautiful gemstone into stratospheric figures. More than 10,000 times rarer than a diamond, prices for a single carat can easily run into five-figure sums, and Paraiba tourmalines weighing more than 3.00 carats are almost unheard of.

Also known by its scientific name, cuprian elbaite, Paraiba tourmalines owe their glorious colour to traces of copper in the crystal lattice. As part of the cutting process, the gemstone is heated to high temperatures to remove other minerals such as manganese. The pure, vivid colour that emerges makes the gem perfect for use in high jewellery, like these one-of-a-kind earrings from the 2015 Red Carpet collection of Chopard jewellery, set with blue-green Paraiba tourmalines and white diamonds.

Their head-turning beauty is intensified by the fact that these precious stones appear to be lit from within, giving them an incredible luminous quality that has turned Brazilian Paraiba tourmalines into one of the world’s most sought-after gems. Just over a decade ago, in 2003, deposits of Paraiba-like tourmalines with a chemical make up very similar to their Brazilian counterparts were uncovered in Mozambique and Nigeria. Charlie Pragnell, managing director of George Pragnell Fine Jewellery, says that while the African gems can be described as having a Paraiba-like colour, only the stones mined in Paraiba qualify to go by that moniker. He adds that the 3.83ct Paraiba tourmaline ring from the George Pragnell Fine Jewellery collection is set with “a perfect Brazilian Paraiba tourmaline of exceptional colour saturation. It is, as we say in the trade, a ‘gem’ – a perfect example.”

Jody Wainwright, director and head of gem sourcing at British jewellery brand Boodles, is another big Paraiba tourmaline fan. He says that the stone’s incredible appeal, which lifts it head and shoulders above other coloured gemstones, boils down to one factor: “Colour, colour, colour. The electric turquoise of Paraiba tourmalines is what sets them apart. Their value and reputation are all based on their shade – the brighter the better.” It makes sense then that the hue of the gemstone is his first criteria when selecting a Paraiba tourmaline for a piece of Boodles jewellery. “Each stone must have an electric vibrancy that makes it stand out. Paraiba tourmalines look amazing set simply with diamonds to add drama, or combined with other stones such as emeralds or sapphires,” he adds.

Burmese jewellery brand Omi Privé uses a mixture of Brazilian and Mozambique gems in its impressive ring, which features a centre stone from Mozambique and smaller Paraibas from Brazil. Niveet Nagpal, president and head designer, says: “When stones are not from Brazil or certified as ‘Paraiba tourmaline’, we refer to them as cuprian elbaite tourmalines, or less frequently as Paraiba-type tourmalines. It is a grey area for most people in our industry.”

Los Angeles-based jeweller Martin Katz first developed a passion for Paraiba tourmalines in the mid 90s and, over the years, has built up a collection in various shapes and sizes. While finding exceptional precious stones is proving ever more challenging, he says: “Paraibas have been my favourite semi-precious stones to work with and I try to buy every great specimen I come across.” As a result of this perseverance, he created a collection of one-of-a-kind jewels set with striking Paraiba tourmalines, including a cuff set with no less than 121 carats of Paraiba tourmaline cabochons.

A Paraiba tourmaline of outlandish proportions, weighing in at just under 30 carats, takes centre stage in a white gold bracelet by Brazilian jewellery designer Ara Vartanian. He agrees that the stone’s vibrant intensity is what sets it apart from its African counterparts. “The most important characteristics I look for when purchasing a Paraiba tourmaline is its vibrancy and hue, in other words, what I describe as the stone’s ‘neon‘.” With a price tag of more than three-quarters-of-a-million dollars, this kind of mesmerising beauty certainly doesn’t come cheap, but when you consider the Paraiba tourmaline’s short chapter in the world’s mining history, the chances of the gem’s value plummeting is virtually nil.

Many jewellers say that once a client has discovered Paraiba tourmalines they are hooked and keep coming back for another fix of the electric-hued stone. And who can blame them: the colour blue is known to have a calming effect on both mind and body, and wearing one is like gazing into the depths of the Caribbean ocean.