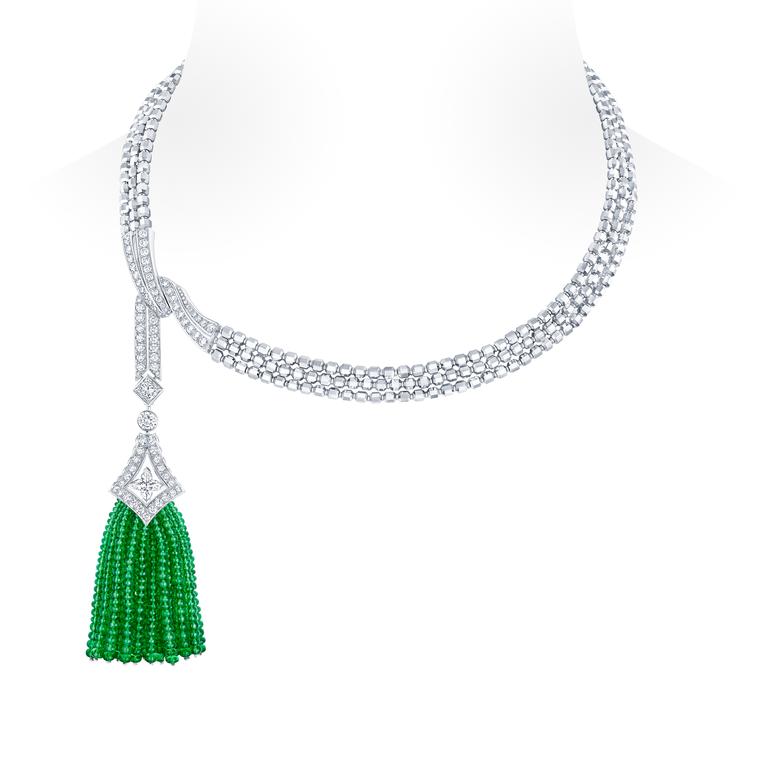 Looking back at all the high jewellery collections that have impressed me this year, one in particular stands out: Louis Vuitton’s Acte V/The Escape. The French Maison’s sixth high jewellery collection whisks you away on the ultimate luxury holiday, with the colours of the sea mirrored in sea-blue opals and other rare precious stones sourced from around the globe. Comprised of 50 one-of-a-kind jewels, this unique collection of Louis Vuitton jewellery beguiles from start to finish. The perfect coming-together of the past and present, the 1930s influence is clear, but the pieces remained beguilingly contemporary thanks to the sensuous lines and long, flowing forms.

Named after the famous resorts from the golden age of travel, the names Beau Rivage, Newport, Luxor, Excelsior and Capri speak of the glamour of travel when it was the preserve of the gilded few. And what better place than Capri, the playground of choice for the wealthy since Roman times? The island’s unpretentious take on luxury is similar to the jewels: sexy and relaxed. Separated from the world by the azure translucence of the Tyrrhenian sea, the endless vistas, the scent of lemons and the slowing of pace to “dolce far niente”, even the most determined succumb to its charms.

Seduced by the island, it is no coincidence that one of my favourite suites is Capri, which so vividly captures the colours of the famous Blue Grotto by using mysterious black Australian opals surrounded by sparkling waves of diamonds. And I am not alone, as the main necklace, with a 32.72 carat African tourmaline, was bought as soon as it was unveiled.

The Louis Vuitton Excelsior jewels clearly reference the 1930s when travel became a pleasure and the first luxury tourism began. It was also a time when the rigorous lines of early Art Deco gave way to the softer voluptuous curves of what is known as the Streamline Moderne style – influenced by the world of travel – which was at the forefront of technological progress. It was at this moment that artist and engineer came together to create the role of designer, elevating the functional to an object of beauty. As if looking at the wake of a powerful boat cutting through the water, a sea foam of diamonds, pearls and blue tourmalines frames a blue enamel V and cascades from the ear, adorns the finger or languidly drapes across the body.

Dive into the deep blue yonder with more sea-inspired jewellery

The subtle use of the V shape can be seen in each jewel, from small details in the prongs to the central motif of a pendant. The Louis Vuitton Luxor jewels takes the V shape to Egypt by way of the lotus flower – a theme popular during the Art Deco movement thanks to Carter’s discovery of Tutankhamun’s tomb in 1922. Diamond fronds fan out to form Louis Vuitton earrings and a pendant in the shape of a lotus flower, highlighted by a vibrant flash of green grand feu enamel.

The optimism of New York and its unstoppable growth comes to rest in Newport – the favoured holiday haunt of the wealthy Manhattanites. The long necklace strings out pearls like bubbles from an idling boat engine, trailing behind the bow and stretching far into the distance. Like the hum of a jazz riff, black Tahitian pearls change the tempo in a perfect row of lustrous pearls, cinched by a black onyx shield with an impressive diamond at its centre. The boat engages its engine full throttle and turns a circle to create concentric waves of diamonds that are transformed into diamond ear clips. An emerald brighter than a diamond burns through its black onyx frame to form a bold and very memorable Louis Vuitton ring.

In Long Island, a bewitching soft grey Burmese sapphire arrests the flow of grey Tahitian pearls, its symmetry echoed in two onyx drops fringed with diamonds – a ripple of repeated patterns, like waves against the side of a boat, as rare coloured gemstones meet man-made perfection.

The Beau Rivage necklace, which loops around the neck with the fluidity of a silk scarf, gleams with diamonds, pearls and tsavorites. Each piece in the collection is so easy to wear that you might forget they are precious pieces of high jewellery destined to provide welcome moments of escapism, even when that exotic holiday is but a distant memory.