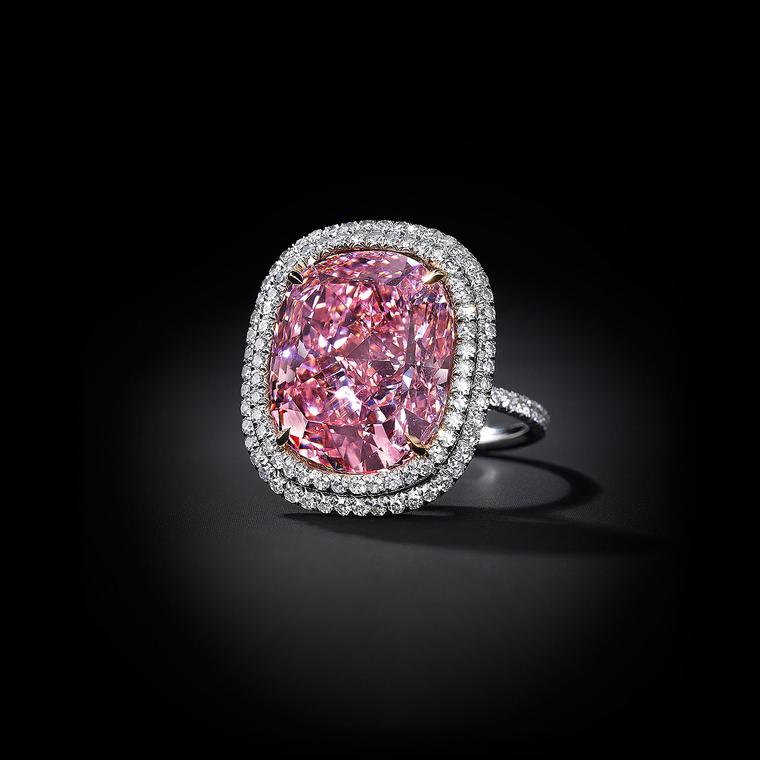 From white to blue and pink, and from cushion to emerald cuts, when it comes to diamonds, buyers’ appetites at auction showed no sign of abating in 2015.

Here are the TOP SIX record-breaking diamonds for 2015:

3) The whopping 100.20ct “ultimate emerald-cut diamond” fetched $22.1 million at Sotheby’s  making it the most expensive colourless diamond ever sold at auction in New York.

4) “The Historic Pink Diamond”, which once belonged to Princess Mathilde Bonaparte, resurfaced after seven decades in a vault and was sold by Sotheby’s Geneva for $15.9 million.

The year saw several world records broken at auctions across the globe, catapulting the sums paid for the most expensive diamonds into ever more stratospheric territories. Christie’s New York got the auction season off to a flying start in April with diamond highlights including a 5.29ct Fancy Intense purplish-pink diamond ring that sold for $5.7 million. Later that same month, history was made at Sotheby’s New York when a giant gemstone dubbed the “ultimate emerald-cut diamond” went under the hammer for a staggering $22.1 million to become the most expensive colourless diamond ever auctioned in New York. Weighing in at 100-plus carats, it was also the largest perfect emerald-cut diamond to ever be offered at a jewellery auction anywhere in the world.

In May, a rare 8.72ct cushion-cut pink diamond, which once belonged to Princess Mathilde Bonaparte, niece of Napoleon I, sold for $15.9 million at Sotheby’s Geneva. Nicknamed “The Historic Pink Diamond”, the gem had been kept in a bank vault for seven decades before it appeared on the auction block.

A day later, another pink diamond hit the headlines at the Magnificent Jewels Sale at Christie’s Geneva. The 5.18ct rectangular-cut Fancy Vivid pink diamond ring was the star lot of the Swiss jewellery auction, selling for $10.71 million.

The record books for coloured diamonds were rewritten over two days in November when Hong Kong billionaire Joseph Lau bought two historic gemstones in the space of two days. First, he snapped up a 16.08ct Fancy Vivid pink diamond in a league of its own at Christie’s Geneva for $28.55 million. Renamed “Sweet Josephine” after his daughter, the cushion-cut diamond mounted into a platinum ring became the world’s most expensive pink diamond. A day later, Lau paid $48.5 million for the very rare 12.03ct Blue Moon diamond at Sotheby’s Geneva, setting a new world record for any diamond, regardless of colour, or indeed any gemstone. At an astonishing $4.02 million per carat, the diamond, which is now known as “The Blue Moon of Josephine”, also set a new auction record for the price per carat for any diamond or gemstone, surpassing the previous record held by the Zoe Diamond.

Finally, the final month of 2015 saw a step-cut 2.97ct greyish-blue diamond ring by Andrew Grima become the most expensive gem in its colour category after selling for £1.48 million at Bonhams London.

With so many record-breaking diamonds going under the hammer in 2015, we wait with baited breath to see what spectacular gemstones and dizzying sums 2016 will bring.

Read about the sale of the De Beers blue diamond