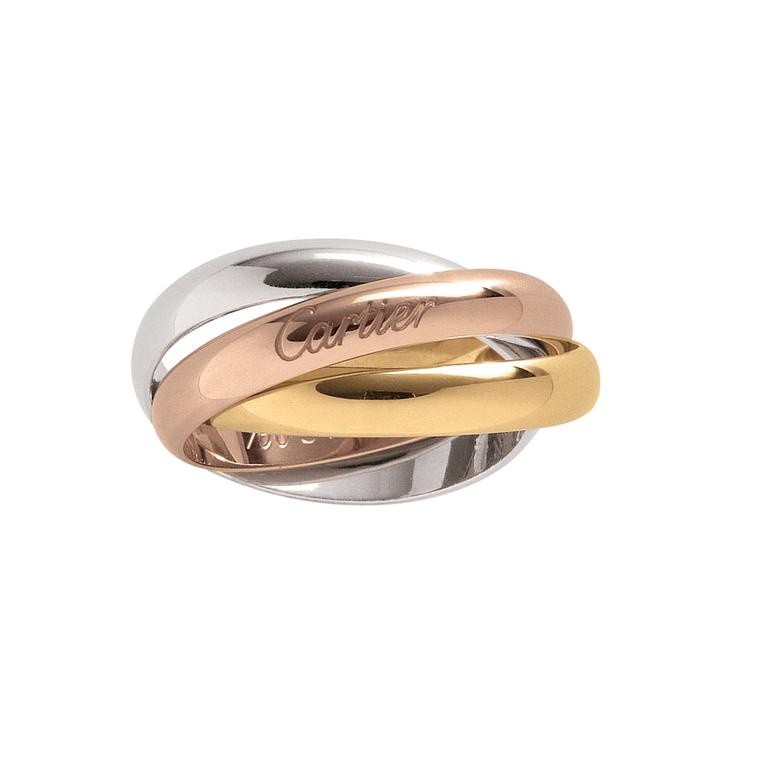 In the first of a series of articles exploring the most iconic jewellery of our time, we look at the best-loved rings that have become part of the DNA of the brands that have created them.

The word “iconic” gets bandied around so much these days that it has made it onto the list of top 20 overused words. Typing it into Google throws up more than 150,000 articles covering everything from iconic watches and films, to socks and hairdressers. However, the true meaning of the word icon is “a person or thing regarded as representative of a culture or movement”. Looking back over the history of jewellery design, there are some pieces that have not only stood the test of time and inspired countless reinterpretations, but have also gone on to become emblematic of the brands that originally created them.

Cartier Trinity rings were designed in 1924 by Louis Cartier, who came up with the seemingly simple concept of intertwining three bands crafted from different coloured alloys, with pink gold representing love, yellow for fidelity, and white for friendship. Originally created as a private commission for French writer and artist Jean Cocteau, Trinity rings are a signature piece of Cartier jewellery that appears in many different guises. But whether it is embellished with pink sapphires or given a monochromic makeover in black ceramic and white gold, the design does not veer far from the initial timeless template.

The iconic status of the Boodles Raindance ring was sealed when the V&A museum in London chose to feature it in its permanent display of British design classics. Available in several different sizes, the original version is crafted from platinum with a cascade of white diamonds that glisten like raindrops in the sun. Head of design at Boodles, Rebecca Hawkins, took several months to achieve the precise arrangement of scattered diamonds and kept returning to the design to get it just right. She says: “I wanted them to appear both random and perfectly balanced at the same time.” In the 16 years since its first launch, more colourful reinterpretations of these Boodles rings have also appeared, set with pink or blue sapphires, rubies, aquamarines and yellow diamonds.

First launched at the end of 1999, the B in B.zero1 stands for Bulgari, while the zero1 denotes that it was the brand’s first jewel of the second millennium. This contemporary design was inspired by the sweeping lines of ancient Roman buildings such as the Colosseum and Pantheon, while the central looping band pays homage to the Tubogas technique that Bulgari revived in the 1940s. The flat rings that punctuate each end are engraved with the distinctive Bulgari double logo, with a Latin V replacing the U. The B.zero1 collection is updated every year, and in 2010, Bulgari teamed up with artist and sculptor Anish Kapoor to create a ring in pink gold and mirror surface steel to celebrate the 10th anniversary of this iconic jewellery design.

Stacked rings have been a major jewellery trend for the last couple of years, but Boucheron was ahead of the curve when it first unveiled the Quatre in 2004. As the name suggests, this jewel consists of four stacked rings that mould together perfectly on the finger to create an edgy, contemporary look that the Maison describes as the “rock ‘n’ roll attitude á la française”. Each ring has a different finish or colour, and the play on texture ranges from smooth to faceted, as well as bands decorated with “gros grain” beading or diamond pavé. Ultra-feminine bridal versions of these Boucheron rings feature white ceramic, diamonds and pink gold to cover all your engagement, wedding and eternity ring requirements in one fell swoop.

Glistening with pebble-smooth gemstones in a mouth-watering range of hues, the Pomellato Nudo rings were launched in 2001 but their design is a distinct nod to the brand’s roots in 1960s Italy. Founder Pino Rabolini was a pioneer of prêt-à-porter jewellery and helped establish the idea that exquisite pieces could be worn for both day and night. Translating as “naked”, the Nudo designs are all about paring back any unnecessary embellishment so the vibrant gemstones can bask in the spotlight. Over the years, the Nudo Classic has been joined by the Nudo Petit – a smaller version of the original, the larger-sized Nudo Maxi, and the Nudo with Diamonds, which features a diamond-encrusted white gold band. The recently launched Nudo solitaires recreate the shape of the centre stone using diamond, ruby, emerald or sapphire pavé and make stunningly unique engagement rings for fans of this iconic design.

The camellia has been synonymous with Chanel since the very beginning. It was the flower given to Gabrielle Chanel by the love of her life Boy Capel and, throughout her life, she surrounded herself with camellias both in her home and on her designs. Today, the blossom is woven into the very DNA of Chanel jewellery and its appearance in the Maison’s collections each season is virtually a foregone conclusion. Its latest reincarnation, in the appropriately entitled Les Icônes de Chanel, sees it incorporated into a diamond-studded openwork design in white or rose gold.

The mere mention of the name Solange Azagury-Partridge and chances are the image that springs to mind is of a pair of seductively parted, pillowy lips. An instant hit with the fashion set when it first appeared in 1995, the Hot Lips ring is as popular as ever and has been spotted on the fingers of many celebrities, including Lady Gaga, Katy Perry and Scarlett Johansson. These iconic rings are available in countless colour variations, from a slick of classic red lacquer to a scattering of diamonds or coloured gemstones.

Digit-spanning rings may be part of every contemporary jeweller’s offering these days, but it was Van Cleef & Arpels who first introduced the between-the-finger ring in the 1970s. The style is now an emblematic signature of the Maison, which has even trademarked the term “between-the-finger ring”. Both elegantly stylish and unique, these Van Cleef & Arpels rings often feature nature-inspired motifs such as butterflies and flowers, adorned with diamonds, mother-of-pearl and onyx.

If you’re looking to invest in a piece of jewellery that will never go out of fashion, you can rest assured that these rings are all true icons that will live on long after the word itself has lost its trendy status.