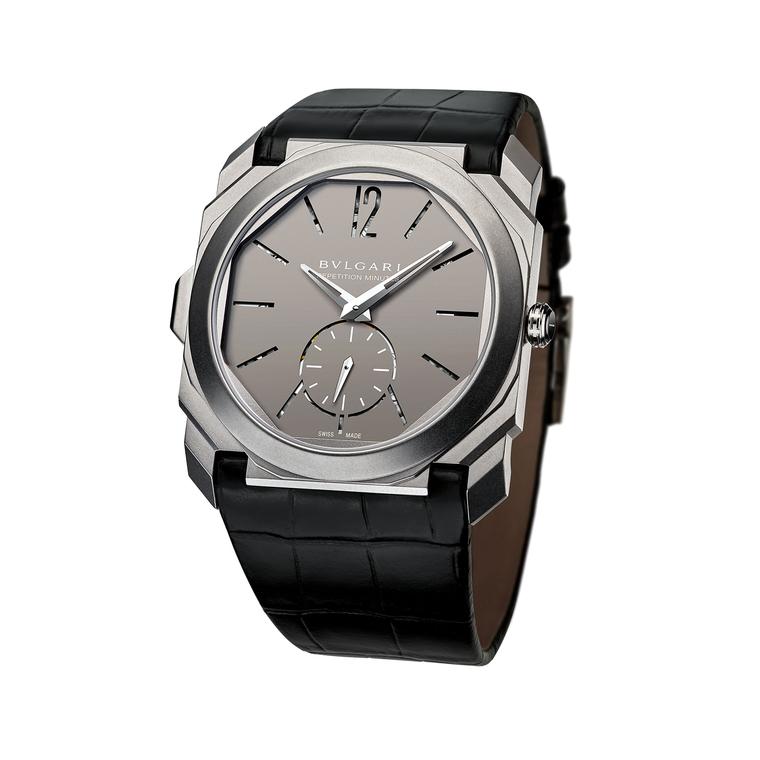 Breaking the silence of a very quiet Baselworld watch fair in terms of innovation and novelties, Bulgari watches trumpeted a new world record. Unveiled to a thronging crowd of journalists, the Octo Finissimo Minute Repeater has the distinguished honour of being the thinnest minute repeater complication on the market, proving once again that Bulgari’s watchmaking campaign has the makings of an empire.

In 2014, Bulgari surprised us with the launch of the world’s thinnest tourbillon, setting a milestone in the company’s watchmaking adventure for ultra-thin watches, congregated under the magnificent Octo legion. Fortified with a record-breaking, slim minute repeater, the new Octo collection also welcomes a skeletonised model and a sleek contingency of dashing Ultranero watches.

Just before we look at these new Bulgari watches in detail, a quick word on the architecture of the Octo is in order. It is intrinsically Roman and reveals Bulgari’s reverence and constant exploration of classical forms and references. Starting from the V in BVLGARI to the use of ancient Roman coins in high jewellery settings, the città eterna exerts its gravitational pull on Bulgari’s products, bringing to life the adage “when in Rome, do as the Romans”.

The Octo, which made its debut in 2012, takes its octagonal geometry from the impressive arches supporting the ceiling of the Basilica of Maxentius in the Roman Forum. To lighten the weight of the colossal barrel vaults of the Basilica – the largest architectural structure of its day – engineers used weight-saving techniques in the form of coffering. The coffering was embellished with two octagons surmounted by a circle, faithfully reproduced on the shape of the Octo case. But what is really interesting here is the way that the designers and watchmakers at Bulgari, like their ancestors from the 4th century, have found groundbreaking ways to streamline the profile of the Octo and lighten its anatomy.

Commanding the legion, the Octo Finissimo Minute Repeater strikes two flanks in one manoeuvre with a sleek, lean profile containing an extraordinarily complex heart capable of chiming the hours and minutes. Minute repeaters are the most complex of all horological complications, and creating a movement – BVL calibre 362 is just 3.12mm thick – to fit in such cramped quarters and produce such an intense chime is nothing short of miraculous. Most minute repeaters depend on generous cases to help diffuse the sound, and the challenge for Bulgari’s watchmaking experts, based in the brand’s very own manufacture in Le Sentier, Switzerland, was to achieve perfect sound in minimum space.

Titanium, appreciated for its innate lightness and properties for diffusing sound, was chosen as the material for the 40mm case. To amplify the sound of the minute repeater, the numbers on the dial and the perimeter of the small seconds counter have been cut out. Like gills, or little apertures, they optimise the sound and subtly reveal parts of the 362 miniaturised components of the hand-wound movement. The caseback, made in sapphire crystal, allows for a full view of the movement with its handcrafted finishes, circular graining and chamfering.

The height of the 40mm case of the Minute Repeater is just 6.85mm thick, and the angular architecture is shown off to great effect thanks to its armour of sand-blasted titanium, which gives it a virile, contemporary spirit. The watch, which is a limited edition of just 50 pieces, sits beautifully on the wrist and comes with a vulcanised black alligator strap and a folding titanium buckle.

Imagine being able to X-ray a Roman building to see the ingenious architectural solutions hidden under the marble finishes. Bulgari treats fans of haute horlogerie to a similar experience with its Octo Finissimo Skeleton, revealing the soul of manufacture calibre BVL 128SK. By using a black coat for the baseplate and bridges to contrast with the satin-brushed components, the eye is drawn into the heart of the ultra-thin, manual-winding movement, which measures just 2.35mm in height. The sleek 40mm steel case comes with a resilient DLC (diamond-like carbon) coating and a warm pink gold bezel, and is presented on an integrated leather strap. Complete with a power reserve indicator at 9 o’clock and a small seconds counter at 7, this lean machine will keep ticking for 65 hours before it will need rewinding.

The new Ultranero models in the Octo legion bristle with Italian attitude and elegance thanks to their impeccable all-black suits created with DLC coating on either titanium or steel cases. The record-breaking, ultra-thin Octo Finissimo Tourbillon, released two years ago with the world’s thinnest tourbillon movement, is fitted out for 2016 with a sophisticated black suit with dapper pink gold touches to frame the spectacle of the flying tourbillon at 6 o’clock.

Resilient, sporty and very handsome, the Octo Velocissimo Chronograph, with a high-performance, in-house chronograph movement, capable of measuring elapsed times to the nearest tenth of a second, is the obvious choice for men who want to look good under duress. These men’s watches are water-resistant to 100 metres and the automatic chronograph movement comes with a 50-hour power reserve.

The Octo Ultranero Solotempo, available with or without a pink gold bezel, is a Casanova in the watch world. Like its sportier brother the Velocissimo, the Solotempo is geared for life’s adventures, both of the sporting and amorous kind. With a solid power reserve and water-resistance to 100 metres, the sensual dark virility of these Bulgari watches is winning over men and women alike.

Empire and eternity are two words that strike a familiar chord at Bulgari, and the combination of Italian design bravado and impeccable Swiss engineering are paving the way for the triumph of Bulgari watches in the elite ranks of haute horlogerie.

Read more on the Bulgari Octo at Baselworld 2016