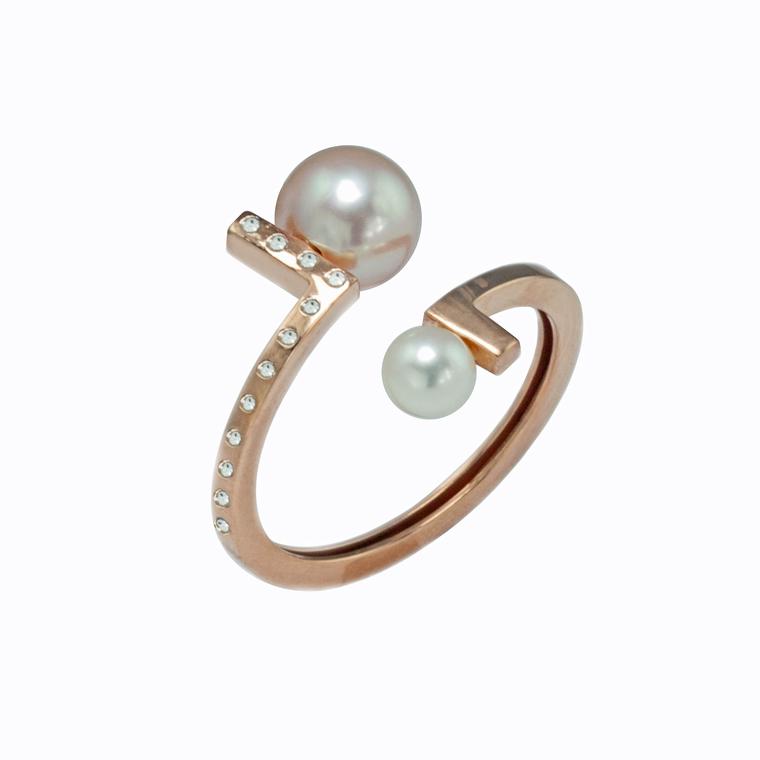 Striking out on your own in the competitive world of fine jewellery takes guts, determination and, above all, talent. Some of the most impressive pieces we have seen in 2015 have been created by independent jewellery designers who have poured their heart and soul into every creation.

As well as designing beautiful jewels, they have also succeeded in building up businesses from scratch while working on their own or as part of a small team. And as women increasingly look for unique jewellery that sets them apart from the crowd, the opportunities for growth are likely to be even more plentiful in 2016.

Here, we highlight 10 of the best emerging jewellery designers that crossed our radar in 2015.

Focusing solely on one-of-a-kind, bespoke pieces, Nouvel Heritage aims to revive the tradition of French artisanal handcrafting for a new generation of jewellery lovers. Each piece is handmade at the brand’s Paris atelier and personalised by engraving it with the wearer’s name. Founder Camille Parruitte, who set up Nouvel Heritage in 2015, is inspired by historical jewellery eras, ranging from the ancient Celts to the Roaring Twenties. She says: “My mission is to recreate the intimate relationship between a bespoke jewellery piece and its wearer.”

Born in Brazil but now based in Oxfordshire, designer Amanda Gerbasi’s architectural training shines through in the contemporary, minimalist pieces she creates for her jewellery brand Kattri. Geometric shapes and repetitive patterns are a mainstay of her jewels, which are often set with gemstones that have been sourced and cut in Brazil. Each piece is created using CAD technology to ensure absolute precision. Amanda says: “I love technology and the fact that you can see the piece in 3D and look at it from all angles. I spend a lot of time getting the proportions right.” The latest collection of Kattri fine jewellery, Asymmetry, was unveiled at London Fashion Week last September and is a modern take on pearl jewellery.

Launched by Charlotte Dauphin de la Rochefoucauld, Maison Dauphin has quickly become the go-to jewellery label for those who favour an elegant, pared-down aesthetic. Seemingly simple lines of gold and diamond pavé are fused together to create voluminous, cage-like silhouettes on necklaces and bracelets. While Charlotte uses a combination of yellow, white, rose and black gold, the most distinctive pieces are crafted from a deep blue gold created using a special dyeing technique, and set with black diamonds that emphasise the inky hue. Based in a showroom at Place Vendôme in Paris, Maison Dauphin is proving that it can hold its own alongside some of the French capital’s most esteemed jewellery houses.

Being named one of JCK’s 2015 Rising Stars has marked Ralph Masri out as one to watch, but his incredible talent was recognised shortly after he started training at London’s Central Saint Martins. Not only did he win the Swarovski Award as a first-year student, at the age of 20 he also became the youngest designer to ever be nominated for a UK Jewellery Award. It’s not surprising that he hasn’t looked back since setting up his eponymous label in 2011. Creating statement pieces that seamlessly straddle the gap between fashion and fine jewellery, Ralph’s most recent collection, Sacred Windows, was inspired by the stained glass windows found in churches and cathedrals.

Being chosen to join Rock Vault – the London Fashion Week showcase curated by Stephen Webster – has catapulted some of the capital’s most talented jewellery designers into the well-deserved spotlight. One of last season’s newcomers was Ruifier, the fine jewellery brand set up by Central Saint Martin’s graduate Rachel Shaw. The name Ruifier is derived from the English word “reify”, which refers to making a concrete object from an abstract idea. Rachel’s love of graphic shapes, inspired by both urban and natural landscapes, is brought to life in innovative colourful designs set with conflict-free gemstones.

Lily Kamper’s distinctive pendant necklaces embody both her passion for unusual materials and her love of colour. Each piece is hand-turned on a lathe from blocks of resin and Perspex in vibrant hues that are then set into gold and decorated with diamonds, sapphires or emeralds. Shortlisted in 2015 for the Avery Dennison Emerging Brand Award, Lily’s jewellery is stocked by the likes of Liberty London, Colette Paris, Tomorrowland Tokyo, and the new Harvey Nichols store in Baku. She also has a really cool selection of unique engagement rings and wedding bands that are perfect for the offbeat bride.

London-based Ana de Costa describes herself as “spiritual, free-thinking and unconventional” and this mystical, otherworldly element also spills over into her jewellery designs. Having built up her eponymous label, The House of Ana de Costa, from scratch with no outside investment, she has won numerous awards as well as undertaken private commissions for celebrities such as Brad Pitt and Angelina Jolie. Ana also has several collaborations under her belt, including projects with Gemfields, Swarovski and The Woodland Trust. She is now part of the Rock Vault initiative, which can only serve to further raise the profile of this very talented independent designer.

Based in the Goldsmith’s Centre in the heart of London’s jewellery mecca Hatton Garden, Flora Bhattachary is a jeweller who really grabbed our attention in 2015. Her Asian-inspired pieces are all handcrafted and carved using gems in an intoxicating array of colours. Floral motifs are a recurrent aspect in Flora’s work and her Jyamiti jewellery collection features three-dimensional flowers carved from amethyst, rock crystal and quartz. The story of her ancestors’ migration to India in the 18th century is woven into each jewel while other inspirations include historic European jewellery.

The architectural lines of Paris and the lush tropical fauna of South America come together in the jewels created by Aurélie Bidermann. Captivated from an early age by the jewellery worn by her mother and grandmother, Aurélie’s approach to design is filled with spontaneity and a sense of fun. A seasoned traveller, inspiration is as likely to come from the Mayan temples as the Mid-West and she also dips into different eras, from antiquity to the Seventies. The result is an elegantly eclectic collection of unique jewellery where gem-encrusted apple cores sit alongside scarab pendants and rings in the shape of ladybirds.

Yannis Sergakis is part of a new guard of Greek fine jewellery designers who are changing our perception of Hellenic jewels. A descendant of a long line of Greek diamond traders, Yannis worked for the family business before setting up his eponymous label. Working exclusively with gold and, of course, diamonds, he creates minimalist jewellery inspired by the simple hinge used by craftsmen in historic times. After showing at Baselworld for the first time in 2015 – a move that brought worldwide attention to his chic, contemporary designs – Yannis is definitely on our list of independent designers to watch.