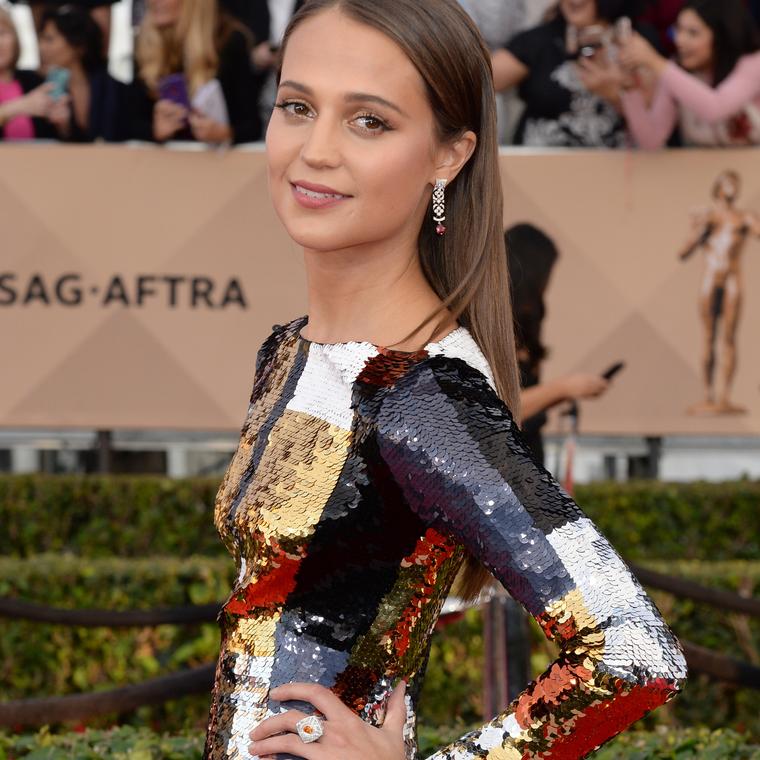 Saturday’s Screen Actors Guild Awards in Los Angeles were a more relaxed affair than last month’s Golden Globes. Most stars put away the statement necklaces and played it safe in diamond jewelry: earrings and bracelets that were undeniably eye-catching and glamorous nevertheless.

Alicia Vikander, who won Best Supporting Actress for her role in The Danish Girl, looked heavenly in metallic sequins and high jewelry from Louis Vuitton. Her diamond and spinel drop earrings were a perfect match to her gown and enviably golden complexion.

Viola Davis, who took home the prize for Outstanding Performance by a Female Actor in a Drama Series for her role in Shonda Rhimes’ How to Get Away with Murder, also looked glowing. She paired an off-the-shoulder lavender Zac Posen gown with Buccellati jewelry, including a pair of diamond pendant earrings and a stack of the Italian jeweller’s iconic textured cuffs.

Brie Larson added to her recent Golden Globes win with a SAG Award for Best Actress in a Movie for her role in Room. She chose diamonds in the form of chic drops and bracelets from Tiffany to accessorise her cornflower blue Atelier Versace gown.

See why we can’t get enough of Tiffany jewelry

Red carpet pro Naomi Watts, by contrast, chose blue sapphires to go with her blue, floral-embellished Burberry gown. She once again wore Bulgari, pairing her high jewelry earrings and ring with a high-end watch from the Roman jeweller’s Lvcea collection.

Double nominee Helen Mirren showed off her timeless beauty in a silver-sequined Jenny Packham and sparkling Harry Winston jewelry, which included an elegant swirl of diamonds in each ear.

Saiorse Ronan, nominated for her role in Brooklyn, was one of several stars who went for “pale and interesting”. She wore a demure Michael Kors soft pink lace gown and equally pretty Forevermark diamond earrings.