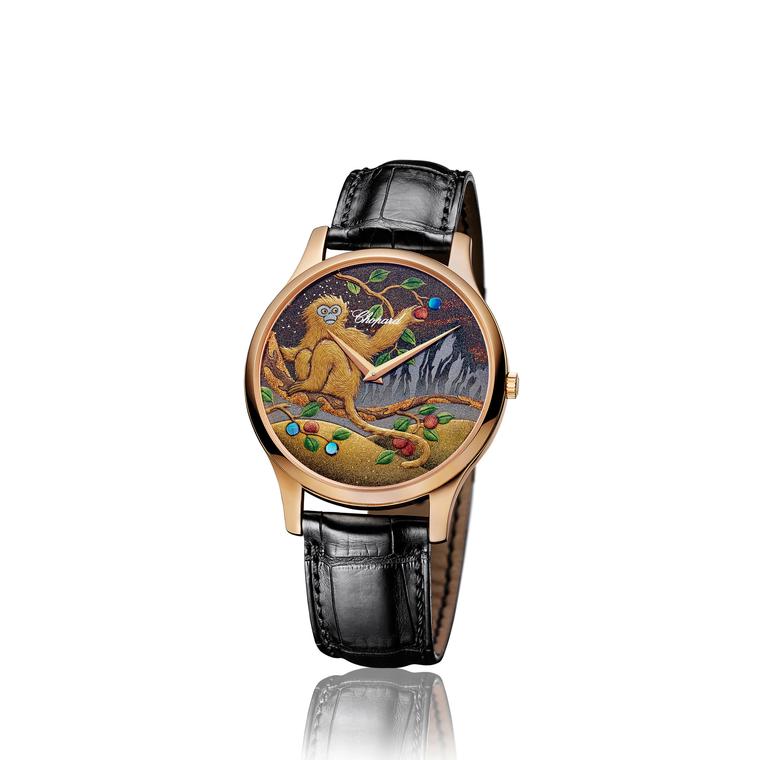 With Chinese New Year around the corner, a rich array of animal watches from the world’s most luxurious Maisons are making their presence felt, including this Cartier beauty unveiled this week at the SIHH in Geneva. Celebrating the panther motif that is a constant presence in the Cartier universe, the colourful dial of this new Ballon Bleu de Cartier watch – limited to 30 pieces – has been hand-crafted using enamel graduation to create the wild cat’s richly coloured and textured coat.

Unveiled just before Christmas, a new Chopard watch features a monkey at the ready. The L.U.C XP Urushi Year of the Monkey timepiece incorporates a detailed scene on the dial showing a monkey plucking a peach from a tree – a popular scene in Chinese iconography that is believed to bring good luck. This was created using rare Urushi enamel by a master artist in Japan.

While each Chinese New Year brings with it wonderfully creative themes – 2015’s Year of the Goat delivered some highly unusual designs, while 2014’s Year of the Horse was perfect for equestrian fans – it’s not the only time of year that watch designers will turn to the animal kingdom for inspiration. Creatures great and small have long been a rich source of inspiration, and when they make their way onto the dials and cases of luxury watches, it is usually done so with an extra level of creative flair.

As with Chopard’s monkey timepiece, many watchmakers turn to the incredibly intricate art of enamelling to create miniature animal artworks. The DeLaneau Elements watch has just been unveiled, which features a dial painted with a jungle scene using the enamelling technique la peinture miniature sous fondant. This is incredibly difficult to master, with the artisan enamellist who created the dial saying: “I couldn’t work for more than an hour at a time because I often couldn’t breathe – I had to hold my breath and let my hand guide my movements with its inner feelings, totally independent of my body and mind.”

Jaquet Droz also turned to mosaics when it created the Petite Heure Minute Mosaic Elephant watch, but instead of stones it used 2,000 pieces of quails’ egg shell, which took more than 200 hours to put together.

Last year, the art of cloisonné enamelling was combined with an engraving technique in a range of Hermès watches to create a colourful Pegasus-inspired scene of a zebra rearing up. Showing off its golden-orange and blue wings, the scene was borrowed from an Hermès silk scarf. The dial was fitted to one of its Cape Cod models, with the extravagant scene contrasting with the simple lines of the white gold case and plain black leather strap.

Replicating the majesty of the animal kingdom on a tiny watch dial takes dedication and expert craftsmanship. Watchmakers that push the boundaries to create modern masterpieces in miniature, using age-old techniques, never fail to delight, and so this herd of animal watches continues to grow ever more magnificent.