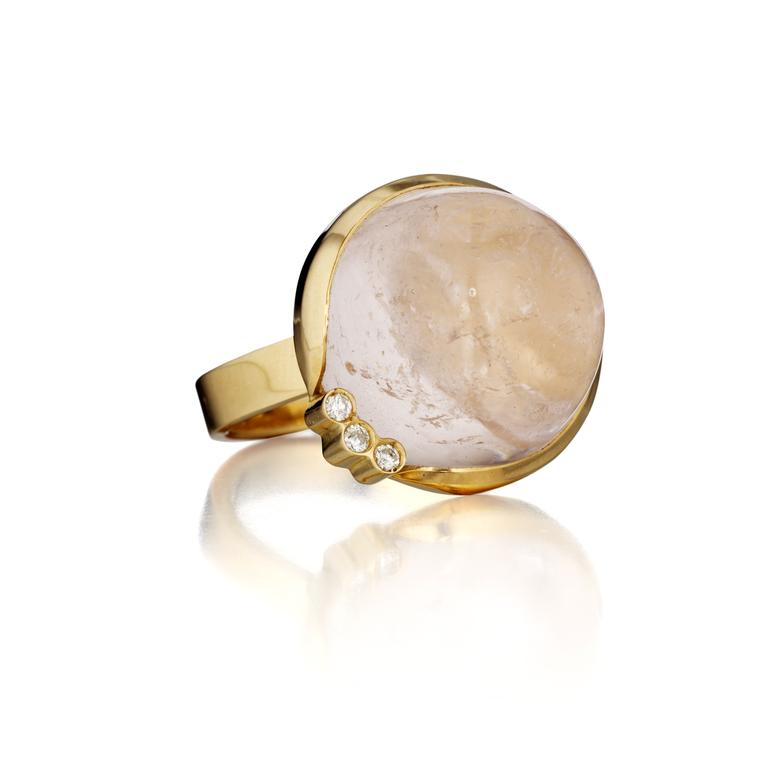 Morganite has been flying under the radar for a long time but the increased popularity of pink gemstones has catapulted it into the well-deserved spotlight as a more affordable alternative to pink diamonds. Initially referred to simply as pink beryl, morganite only became a gemstone in its own right in 1911 when it was named after the banker and renowned mineral collector John Pierpont Morgan, founder of JP Morgan and one of Tiffany & Co’s biggest customers.

While the gem was first discovered in Madagascar, dwindling deposits on the African island has helped establish Brazil as the main source of morganite. Most of the gemstones on the market today come from the pegmatite mines in the Minas Gerais district. Unlike the magenta-hued Madagascan morganite, the rough stones mined in Brazil often have a peachy-orange tone, with the soft pink colour only emerging after heat treatment.

As a member of the same beryl family as aquamarine and emerald, morganite has a hardness of 7.5 to 8 on the Mohs scale. A high-quality cut is needed to bring out the subtle colour of the gemstone and the pale hue is best showcased in stones weighing more than two carats. The delicate tone also means that morganite pairs well with other stones from across the colour spectrum. When the gem is set into rose gold it creates a soft romantic look, while white gold or platinum has a more modern, icy effect.

Along with the country’s rainbow of gemstones, Brazilian jewellery is also on an upwards trajectory thanks to designers such as Carla Amorim, Brumani, Yael Sonia, Ara Vartanian and his brother Jack Vartanian, who are all making names for themselves across the globe. The Olympics 2016 presents a golden opportunity to fly the flag for Brazilian design and further highlight the wealth of jewellery talent that the country has to offer.

Never shying away from vibrant and unexpected colour combinations, Carla Amorim jewellery set with Brazilian gemstones is both flamboyant yet sophisticated, inspired by both the natural landscape and urban architecture of Brazil.

Bold stones and geometric shapes are something of an Ara Vartanian speciality, and here he serves up a pair of morganite earrings as vibrant and colourful as Rio itself. The use of multi-coloured morganite with black and white diamonds puts this demure pink beauty in a completely different light. As Ara says: “Morganites are delicate and very feminine stones. Being a Brazilian-based designer, I have had the privilege of working with some beautiful morganites that inspire me to create unique pieces.”

And it’s not just Brazilian jewellery designers who are embracing the abundance of gemstones that the country’s mines have to offer. London-based jeweller and long-time collaborator of the late Alexander McQueen, Shaun Leane is known for his exquisitely crafted avant-garde designs that have been described by Sotheby’s as “antiques of the future”. The romantic colour palette of pink tourmaline and morganite in this Shaun Leane ring from the Aurora collection is toughened up with intertwining shards of diamond-encrusted white gold.

Lebanese jewellery designer Christina Debs creates ethereally beautiful yet contemporary jewels inspired by the traditions of female adornment in the ancient kingdom of Phoenicia. A pair of morganite briolettes provide the perfect finishing touch to these ear pins, which are also set with pink topazes and white diamonds.

Proving that it is worthy of inclusion in the most luxurious of high jewellery pieces, an 18.90ct pear-shaped Brazilian morganite takes centre stage in this piece of David Marshall jewellery. The Damask Brooch, with a design inspired by the Damask Rose, features a vibrant pink gemstone surrounded by diamonds, graduated in colour from white to light pink, which mimic the movements of a natural flower.

Whichever team walks away with the most medals at the Olympics 2016, you can rest assured that Brazilian morganite will continue to cast its mellow glow over the jewellery industry for quite some time.