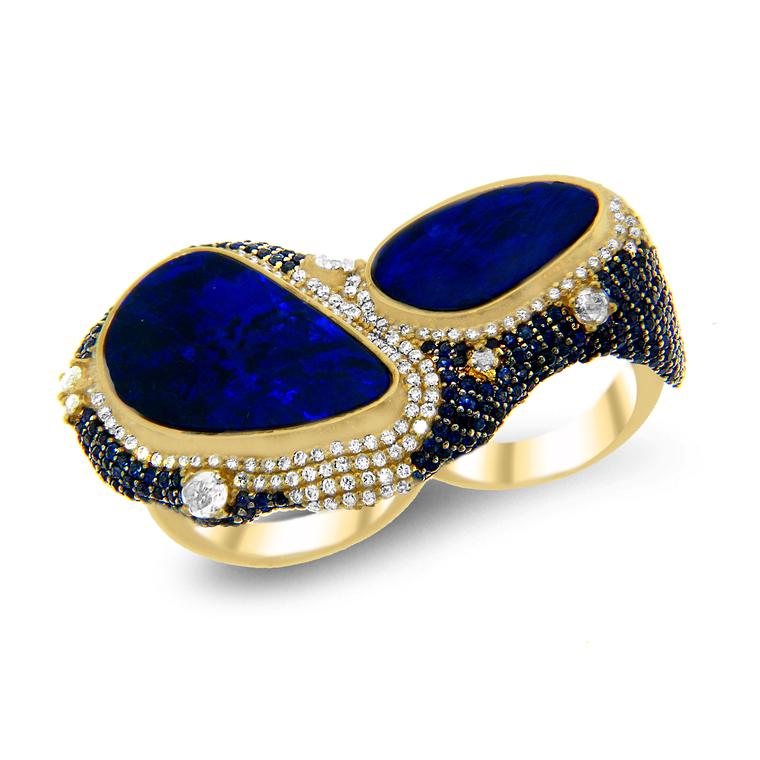 With a richly colored, seductive mixture of black opals, tsavorites and blue sapphires, the Portofino jewelry collection by Michael John immediately transports you to warm summer days by the ocean.

The collection has been a long time in the making, says Michael Hezar, the brand’s designer and chief executive. “It was inspired by a trip to Italy with my family 15 years ago. I’ve been looking at the pictures from that vacation on my computer monitor ever since,” he explains.

Having fallen in love with the rugged coastline and dramatic mix of beach and mountains, and sky and ocean surrounding Portofino and the nearby Cinque Terre region, Michael chose the Australian black opal as the basis for the collection – the first time he had ever worked with the precious stone so extensively. Its mesmerizing depths and flashes of fire proved to be the perfect starting point for a precious collection of ocean-inspired jewels.

Just like an opal, every piece in the collection is one-of-a-kind and Michael is delighted with the results. “I love the organic shapes, the natural inspiration and the combination of colors,” he says. His customers have also fallen for the collection. “These are pieces that they will hold on to forever,” he adds.

The Australian gem is used to spectacular effect in the mismatched Sottosopra earrings, which feature textured pavé and organically shaped mosaics of rose-cut diamonds – the latter evoking the coastline’s sandy beaches with sun-soaked touches of gold peaking through.

The Celeste double finger ring intersperses diamonds amid a sea of sapphires, like sunlight on the bottomless depths of the ocean. Its central opal emerges like an island amid the rolling waves.

The brand’s expertise in creating couture-level opal jewelry is, Michael says, thanks to his partnership with his brother John. The two were born in Iran and raised in Southern California before they entered the jewelry business at an early age, with Michael in design and sales, and John on the manufacturing side. In 2005, they united their experience and formed Michael John. “We got together and realized we made a good team,” he says.