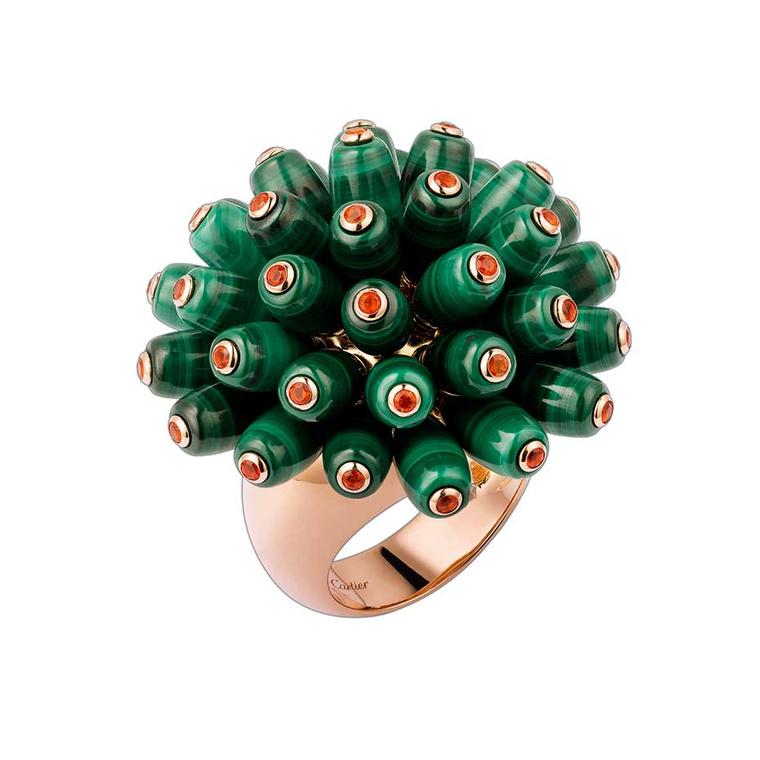 The Seventies vibe is all-pervasive on the catwalk, in jewelry stores and at Baselworld right now, and what says Seventies luxury more than malachite jewelry?

Said to be the guardian stone of travelers, malachite was mined as early as 4,000BC by the ancient Egyptians. The opaque, richly saturated stone takes its distinctive green color from the presence of copper in the earth, and its most prized examples offer rich bands of alternating dark and light green, often in mesmerizing patterns.

First designed in the Sixties, the long Alhambra necklace has become a Van Cleef & Arpels jewelry classic. Princess Grace of Monaco acquired a malachite necklace in 1974, and also owned several other versions. Even today the Maison offers a similar necklace – the Magic Alhambra features the four-leaf clover motif in malachite in varying sizes, and it is as elegant today as it was then.

Designer Madyha Farooqui has long admired the vintage jewelry of Van Cleef & Arpels, and other mid-century greats such as David Webb and Bulgari. “Yet malachite was out of fashion for decades,” she says. “It didn’t seem to me that it should be, because it was so beautiful in both color and pattern. There’s something so romantic, modern and old-world about it.” The New York designer started making malachite jewelry in 2013 and the response was immediate and overwhelming. It has since become a key part of her collection – her dramatic, yet elegant, District Link malachite cuff features wide bands of the striated gem studded with diamonds.

Georg Jensen unveiled new versions of its Runa neck ring with beads of tiger’s eye and black jade at Baselworld 2016. Our favorite, however, is the malachite version – the stone’s internal patterns and intense color contrasting beautifully against the simple silhouette of its yellow gold pendant.

Kimberly McDonald’s design aesthetic has always been to let nature speak for itself, and her malachite pendant does just that with beautifully contrasting swirls of blue azurite. And Andrea Fohrman uses the natural striations of malachite to create a new version of her rainbow ring in an array of gorgeous greens.

Finally, Cartier’s Nouvelle Vague malachite ring celebrates the sculptural possibilities of this gemstone in a playful concoction of beads studded with fire opal and rose gold.

Clearly it’s time to put on those bellbottoms and re-enter the Seventies in style.