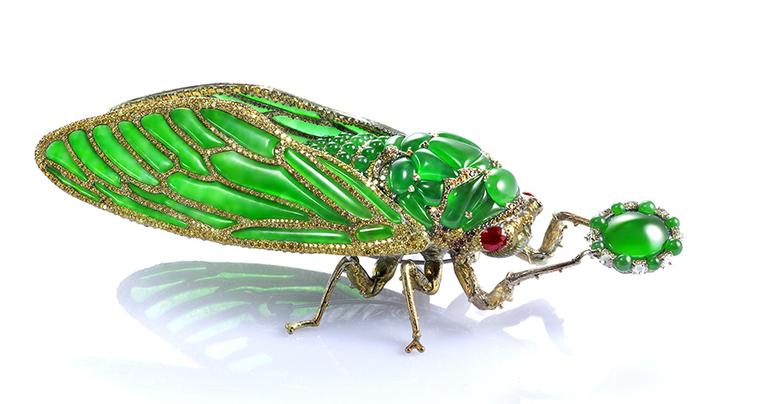 With the untimely passing of star architect Zaha Hadid announced yesterday, just a few weeks after her collaboration with Georg Jensen was unveiled at Baselworld, discussing the concept of jewellery sculpture – the merging of two different creative mediums – couldn’t be more timely.

The official date for the worldwide launch of the line of silver jewellery created by Zaha Hadid for Georg Jensen was scheduled for September. Whether that date will remain the same is not yet known, but the angular jewels, inspired by the Wangjing SOHO complex she created in Beijing and created using the same 3D techniques she applies to her building concepts, are a wonderful example of jewels that blur the lines between artistic mediums.

At the recent TEFAF Fair in Maastricht, jeweller Wallace Chan presented a never-seen-before work of art. Rather than an intricate cocktail ring or elaborate collier, it was a 3-metre-high jewellery sculpture of titanium panels, annodised to create a play of light between black, blue and green, and decorated with blued titanium cherubs and a 1,399ct blue topaz.

Sculpture plays a key role in Wallace Chan jewellery and, elsewhere on the stand, more pieces referenced this meeting of disciplines. Case in point: the Stilled Life cicada imperial jadeite brooch, which was presented on a large sculpture of a bamboo branch. The inflated scale of these creations certainly drove home the message that jewels are wearable art forms, but the wow factor of jewellery sculpture actually relies on their miniature proportions and the skill required to make something so small feel so grand.

Ornella Iannuzzi has long been creating miniature jewellery sculptures, and this year at The Goldsmiths’ Craft and Design Awards in London, it was a pendant designed around a 45ct tanzanite that won the attention of the judges, and a Gold Award for the designer. Iannuzzi describes the white gold L’Exceptionnelle tanzanite design, which was created using lost wax casting techniques, as both a sculpture and a pendant, and says it took 207 hours to make.

Jewellery has long offered designers of other disciplines the chance to apply their talents to a new medium, and the art jewellery scene has a dedicated following of collectors. Louisa Guinness Gallery in London is dedicated to jewellery created by sculptors and painters, and one of the latest artists to join its line-up is Israeli artist, architect and designer Ron Arad, whose offering includes spiralling, brightly coloured polyamide earrings and necklaces made using a mixture of materials including silk, quartz, gold, silver and silicone.

Another gallery in London catering to those collectors looking for jewellery sculpture that blurs the lines between goldsmith and sculptor is Elisabetta Cipriani. The gallery was founded in 2009 and since then has been collaborating with sculptors and painters to create wearable sculptures.

One of Elisabetta Cipriani’s latest collaborations is with Chinese artist Ai Weiwei, who created a collection of handcrafted 24ct gold bars, which he bent into curved shapes to be worn as bracelets, and which can later be reformed by their new owners due to the malleability of pure gold. The designs are inspired by a large-scale sculpture he created using contorted steel rebar brought from the site of the 2008 Wenchuan earthquake in the Sichuan Province in China that killed 70,000 people.

And there is yet another exciting collaboration on the horizon for fans of sculptural jewellery. September will hold the worldwide launch of a line of silver jewellery created by Zaha Hadid for Georg Jensen, which is inspired by the Wangjing SOHO complex she created in Beijing and which has been created using the same 3D techniques she applies to her building concepts.