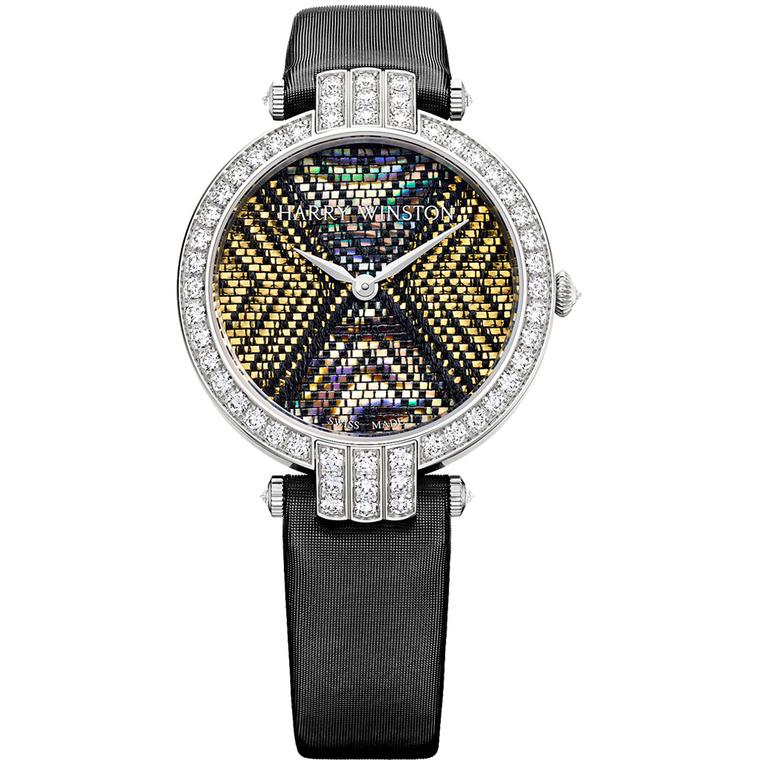 One of our missions at The Jewellery Editor is to discover and share with you exceptional and even unusual artistic adventures in the field of watchmaking.

Harry Winston – the brand you probably associate with New York, the Hope diamond and high-voltage red carpet jewellery – is, since 1989, a highly respected and daringly creative watchmaker. When it comes to women’s watches at Harry Winston, there are, as you would expect, a great deal of stunning high jewellery models with enough diamonds to compete with the famous New York lights. But a sizeable proportion of the Premier Collection is reserved as a showcase for some of the most singular and beautiful artistic crafts from around the world.

Some of you might remember the captivating Premier Precious Butterfly, one of our top 10 women’s watches of 2015, which recreated the ephemeral beauty of a butterfly’s wing using the iridescent powder found on the wings of a very special kind of moth and set for eternity on the dial grain by grain. For 2016, Harry Winston has ventured across the ocean to learn about the ancestral Japanese technique of Raden.

Raden is a decorative Oriental craft usually employed to embellish lacquerware and wooden objects. This millenary ornamental handicraft involves inlaying or pasting fine slices of mother-of-pearl – the iridescent inner layer of a shell – into the surface of lacquered wood.

Sometimes referred to as “Japaning” in the UK, the art of Raden was cultivated during the Tang dynasty in China and made its way to Japan in the 8th century during the Nara period. Such was the appreciation for this artistic skill that the names of craftsmen who were adept at Raden in Japan’s Edo period have gone down in history.

How is Raden used on Harry Winston’s dials?

The difference with the Harry Winston Premier Precious Weaving watch collection is that instead of inserting slivers of sashimi-thin nacre into lacquer or wood and then coating it with a layer of transparent lacquer to fix it in place, artisans have literally woven the nacre with a thin mesh of silk thread to create a supple, shimmering fabric unlike any you have ever seen. Occupying the entire diameter of the dial, the natural lustre of the shell reacts to natural light, emitting a spectacular rainbow of colours.

This is the first time the Raden weaving technique makes its way on to the surface of a watch’s dial, and the combination of mother-of-pearl from the sea, silk from silkworms on the land and gold from the depths of the Earth are woven into an object that will defy the passing of time.

Four very different moods and colour combinations are presented in the collection. Perhaps the most Oriental in spirit is the rose gold Premier timepiece with a chrysanthemum on its dial, a symbol of the Japanese Imperial family. When the alternating light and darker tones of mother-of-pearl petals catch the light, the natural iridescence of the nacre works its magic.

The second model in rose gold also interprets another familiar Japanese motif: a Koi (carp) fish. The overlapping mother-of-pearl scales are sewn together with silk and gold thread to create a mesmerising, organic pattern.

The two white gold Premier models capture the vibrant energy of New York City. One zigzag model shimmers like the fabric of an haute couture evening gown while the other, in peacock green and purple, is like looking down at the lights of a city on a rainy night.

What was the inspiration behind the Premier case?

Presented in 36mm rose and white gold cases from the Premier watch collection, the diamond-set lugs that attach the case to the bracelet are shaped like the keystone crowning the grand arched entrance to Harry Winston’s flagship Fifth Avenue boutique. The New York sparkle is all there, with a flourish of 57 brilliant-cut diamonds on the case and a further 17 on the buckle. All four models are made in a limited series of 30 watches and are presented on glossy black satin straps.

What kind of movement keeps the time?

The Premier Precious Weaving Automatic 36mm collection is fitted with a high-end Swiss automatic movement – in keeping with the philosophy behind Swatch Group’s premier brands – with beautiful hand-finishings and a sapphire crystal caseback to view the movement in motion.

Who was Harry Winston?

Harry Winston, the legendary New York jeweller, known throughout his lifetime as the “King of Diamonds” and “Jeweller to the Stars”, started his brilliant career buying estate jewels from wealthy American socialites.  By freeing the stones from their outdated settings and re-cutting them in more contemporary styles, Harry Winston was unable to unlock the true potential lurking in their interiors and founded his eponymous jewellery emporium in 1932.

In addition to pioneering techniques for jewellery settings like “clustering”, Winston was the first jeweller to lend actress Jennifer Jones diamonds for her Academy Award Best Actress prize in 1944 setting the trend for red carpet jewellery. However, many people will remember Harry Winston as the owner of many of the world’s most famous gemstones including the Hope Diamond, which he donated to the Smithsonian Institution in the late 1950s.