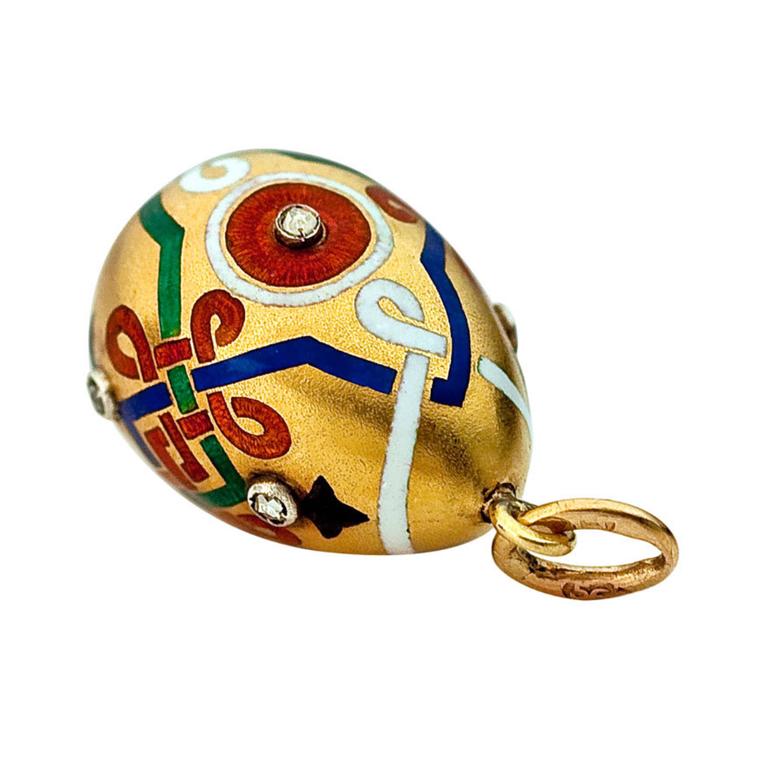 The chocolate eggs are piling up at my house in anticipation of the annual hunt for Easter eggs, where the children go on a rampage and compete to see who can be the first to eat their own bodyweight in chocolate. I, on the other hand, have my eyes firmly set on altogether more luxurious types of eggs in jewellery form, which will last long after the Easter bunny hops away for another year.

Bejewelled eggs have been a traditional Easter gift ever since Peter Carl Fabergé created the first Imperial Fabergé Egg for the Russian Tsar Alexander III to give to his wife Empress Maria Feodorovna in 1885. As Court Jeweller to the Tsars, over the next three decades, Fabergé designed a further 49 lavishly decorated Easter eggs, both for Alexander and his son Nicholas II. Today, the egg motif is inextricably linked with the jewellery house that bears his name and, for many fine jewellery aficionados, a Fabergé egg represents the ultimate Easter gift.

For an Easter egg jewel imbued with a slice of Russian history, view the selection from New York’s online antique specialist, 1stdibs. With a Russian Revival design inspired by medieval motifs, this Fabergé pendant was created around the same time as that very first Imperial Egg. The intricate and elaborate enamel work is testimony to the exceptional skills possessed by Fabergé master Erik Kollin, whose initials are inscribed on the suspension ring of the pendant.

An exclusive Fabergé room dedicated to Carl Fabergé’s “objects du fantasie” has also opened in London antique jewellery store Bentley & Skinner. The room will be open for private viewings during Russian Art Week in May and the pieces on display include an important nephrite egg pendant depicting the imperial crown.

The line-up of contemporary Fabergé jewellery includes the elegant, yet playful, Treillage collection, inspired by the cushion-patterned Diamond Trellis Egg created in 1892. The tactile, quilted surface of this rose gold egg pendant is set with multicoloured gemstones, such as rubies, amethysts, sapphires and fire opals. Another pendant, from the Fabergé Heritage collection, opens up to reveal a cute gold chick nestled inside a gemstone-adorned enamelled egg.

French jeweller Jean Schlumberger started working for Tiffany & Co in the 1950s and is widely considered one of the most important jewellery designers of the 20th century. With a stated desire to “capture the irregularity of the universe”, many of Schlumberger’s designs were inspired by nature and the creatures that inhabit it. His bejewelled legacy includes this diamond-encrusted Tiffany egg charm topped off with a jauntily tied golden bow.

Proving that eggs are not just for Easter, the rubies in this Pippa Small ring symbolise fertility and the beginning of all life. The eggs are based on rubber moulds that Pippa has made from her own parrot and chickens’ eggs, before transferring the shape into resin followed by precious stones.

Across the channel, Dutch jewellery designer Bibi van der Velden is renowned for her use of unusual materials. The Mammoth collection includes several pairs of egg earrings featuring 40,000-year-old woolly mammoth tusks, which have been carved into perfectly rounded shapes and inlaid with gold, silver, diamonds and precious stones.

So, this Easter, why not indulge yourself with one of these luxurious bejewelled eggs and rest assured that once the chocolate frenzy has died down, your jewellery treasure will continue to bring you joy all year round.