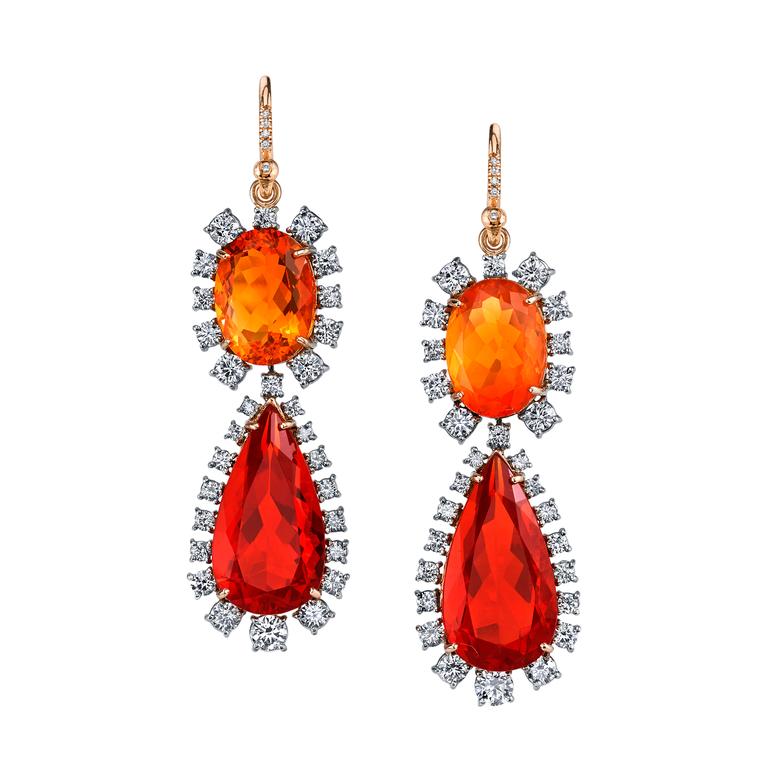 With their unapologetically fiery glow, Mexican fire opals bask in the spotlight whenever they are set into a piece of jewellery.

Literally born out of fire, the orangey red gemstone was formed millions of years ago when water seeped into the silica, deposited into rock voids by the lava flowing from Mexico’s ancient volcanoes. It is no wonder the Mayans and Aztecs believed that fire opals had an inner flame created in the waters of paradise. They nicknamed it the “stone of the bird of paradise” and used the gem in ritualistic practices as well as for colourful mosaics. They also join the other hues of Opals to be the birthstone of October, so if you’re personality and birthday match these stones it is surely a match made in red-hot heaven.

The gem then all but vanished from public consciousness until 1835 when the mining of fire opals began in earnest in the rock strata that runs through the highlands of Mexico. The most important mines are located in the Mexican state of Querétaro but, due to over-mining in the 1960s and 70s, good-quality fire opals are now in scarce supply. While most fire opals stem from Mexico, where it is considered the country’s national gemstone, deposits have also been found in other countries including USA, Ethiopia, Australia and Brazil.

The Mexican fire opal is a rather delicate stone, scoring between 6 and 6.5 on the Mohs scale of hardness, making a protective setting a necessity especially when the gem is set into fire opal rings. Like all opals, it is made from silicic acid, and the vivacious colour that ranges from yellow to red to orange comes from traces of iron oxide. The value of a fire opal is dependent on its transparency, play of colour and fire, with the more intensely coloured stones that shift from orange to red commanding the highest prices. However, most fire opals do not possess a play of colour and, instead, the stones are often faceted to maximise their sparkle.

Whether or not you believe that gemstones possess inherent energies, there is no doubt that the vivacious fire opal positively radiates warmth and harmony when set into fine jewellery. French jeweller Lydia Courteille was so enamoured with the fire opal that she dedicated an entire collection – 2011’s Gardens of Xochimilco – to the fiery stone. Her most recent fire opal jewel is this stunning cuff bracelet set with a 22.08ct Mexican fire opal that burns bright on the wrist.

Lydia Courteille first visited the fire opal mines in Guadalaraja in northern Mexico in 1978 and says that simply looking at one of the bright coloured gemstones fills her with happiness. “I love fire opals, especially the Mexican ones, because the bright colour is such a source of energy, like vitamins. This big opal looks like a magma or the Sun, it really is exceptional.”

One of the world’s largest collectors of opals, Los Angeles-based Irene Neuwirth, often incorporates Mexican fire opals into the colourful jewels she creates for her eponymous brand. The sparkle of brilliant-cut white diamonds adds an elegant touch to these one-of-a-kind fire opal earrings, while at the same time emphasising the blazing red and orange hues of the gemstone.

Born in Australia but now living in Santa Fe, New Mexico, Katherine Jetter is also a huge fan of Mexican fire opal jewellery. She says: “I really love working with fire opals because of the richness of this material. The stone’s colour saturation feels more luxurious than a ruby.”  The Season’s Sunset fire opal earrings feature a pair of stunning hand-carved fire opal briolettes with an ombre colour effect that shifts from yellow to bright red.

While the fire opal makes a natural centrepiece in fine jewellery, it also works wonderfully as an accent to other gemstones. Bright orange garnets and fire opals create a vibrant focal point against the glossy white pearls in the Passion Fire necklace by Japanese pearl jewellery brand Mikimoto.

The volcanoes that gave birth to the brightly coloured fire opals may long be extinct, but the red-hot lava lives on in these sizzling gemstones that seem to burn with an inner flame. If you like your accessories to be bold and colourful, there is nothing like a Mexican fire opal to brighten up your jewellery box.